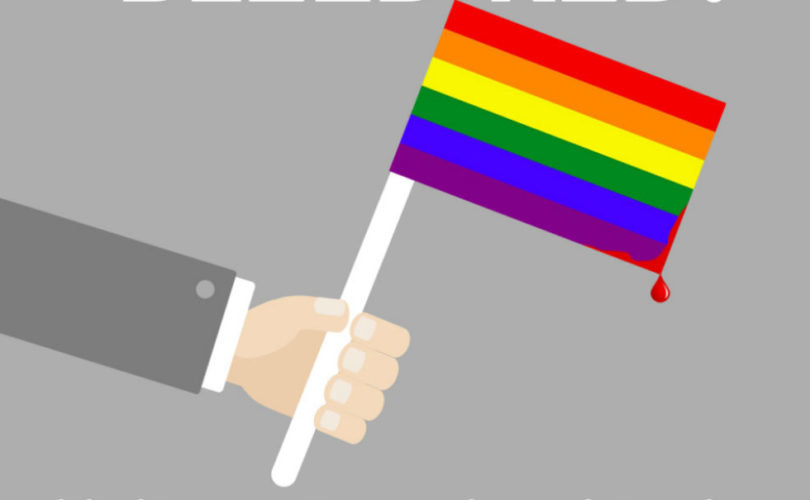 June 4, 2015 (LifeSiteNews.com) — Unlimited access to the internet and 24-hour news cycles would give one the impression that extensive information is being conveyed to the public regarding the crucial issues of our day. But in large part, the same old uninformative stuff gets regurgitated over and over again. The gatekeepers, intent on presenting a one-sided portrayal of one of the most coordinated and funded social movements of our day, are fine with misrepresenting the news.

This is “Pride” month for a community that enjoys the most protection of any people group by news organizations. There’s no journalistic objectivity, only subjectivity drenched in happy rainbow colors and an ever-expanding acronym. The LGBT activist movement enjoys its immunity as it brands any dissenters as haters, bigots, and homophobes.

I’m from a family filled with diversity. I’ve always been taught to love others, to be compassionate, and to speak and live the truth. Oh, and by the way, be prepared for people to hate you anyway. Little did I know, as a child, how valuable those lessons would be now.

The LGBTQ movement decries the “inequality” and the epidemic of “hate violence” that touches the homosexual, bisexual and whatever-you-want-to-be-sexual community. (I’m not going to go into the absurd self-cited “hate violence reports”, pseudoscience, and trumped up statistics right now; that will have to be a whole other Radiance Foundation article). No one deserves to be physically harmed (unless it’s self-defense, of course). Yet, at the same time leading “gay rights” groups cry “discrimination” they actively, and aggressively, promote the most violent form of discrimination: abortion.

Nearly every major LGBTQxyz group (Human Rights Campaign, Act Up, Lambda Legal Defense and Education Fund, and GLAAD, just to name a few) promotes the violence of abortion. Many of them see “gay rights” and “abortion rights” as a united front.

In a teleconference discussing Lamda Legal’s opposition to the confirmation of Chief Justice John Roberts, a participant asked the question: “I looked at your 30 questions and see that several of them relate to Roe v. Wade. Why is Lambda Legal focusing on abortion?” Jon Davidson, Legal Director of Lambda Legal, answered: “Well, for at least a century, reproductive freedom and LGBT rights have been inextricably linked both legally and politically. The ties between these rights are so strong that we really believe that a threat to one directly and profoundly impacts the other. That is true historically.”

He continued: “In the early 1900s, feminist pioneers like Margaret Sanger and Emma Goldman set out to convince the public that sexual freedom and the ability to control one’s reproductive destiny were intimately connected and beyond that that both were essential to individual liberty.”

Yet, here we are in 2015 with multimillion-dollar gay activist organizations embracing the ideals of a racist and elitist eugenicist and an organization birthed in her pseudoscience of eugenics. Some of these groups, like Human Rights Campaign, receive funds directly from Planned Parenthood—a billion dollar business that profits from the violence of abortion.

ACT UP, a homosexual group created to fight the horrible AIDS epidemic, boasted of this union: “In December of 1989, ACT UP made history…About 4500 protestors attended the first ‘Stop the Church’ action to protest the Catholic Church’s deadly, homophobic, and misogynistic AIDS and abortion policies.”

What does AIDS have to do with abortion?  Well, nothing. This historic event in New York was a massive ACT UP protest against what it charged as the Catholic Church’s  “denial of life-saving AIDS information” and its “opposition to a woman’s right to abortion.”

Mainstream media, in collaboration with groups like the National Gay & Lesbian Journalist Association and GLAAD (Gay and Lesbian Alliance Against Defamation), make sure these “rights” are communicated in the same breath, with the same indignant calls for “equality” and “freedom.”

“While many of us in the LGBT community see parallels between the gay and women’s rights movements, we often overlook the direct role of Roe in establishing a right to same-sex marriage…Reproductive freedom and LGBT freedom are two sides of the same idea,” declares GLAAD on its website. The media-focused organization’s mission is, in part, to “create a world where everyone can live the life they love.” Well, everyone except those who are aborted under GLAAD’s banner of “reproductive freedom”.

Sadly, these groups stand in solidarity with an industry that violently discriminates thousands of times every single day and over one million times a year. Apparently, “hate speech” is just fine if it calls for the death of a minority—a minority more vulnerable and more victimized than any other group of human beings…the unborn.

I can’t see the (co-opted) rainbow colors of the LGBT movement’s flag without seeing the blood that drips from the fabric of its hypocrisy. You can’t demand “equality” while proudly stripping it away from millions of others. No one should ever take pride in violence. It diminishes all of us—born and unborn.