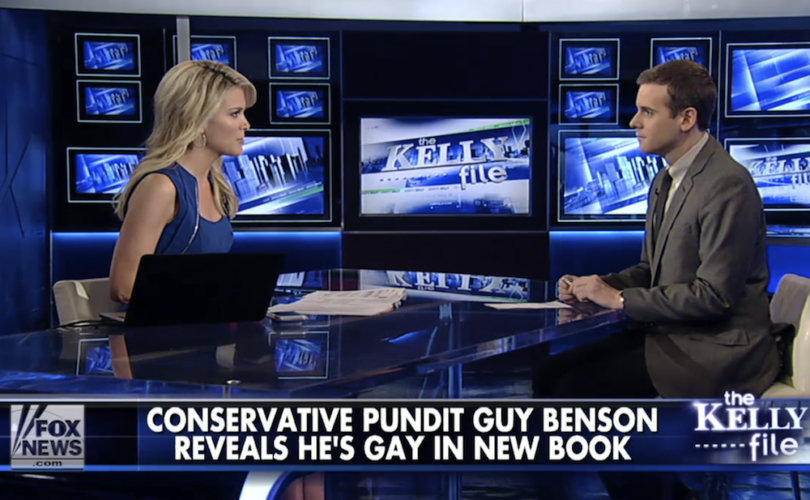 While the network still appeals to conservatives and takes plenty of flak from liberals, there has been a decidedly pro-gay uptick in on-air talent, editorial content and signaling.

When Fox News political analyst Guy Benson announced his engagement to another man on Twitter in May, Bret Baier tweeted back:

Guy — congratulations! It takes guts to ask in a wobbly boat — all the best. Thanks for sharing the moment. Love is cool. https://t.co/R4tz8kAZh2

Bret Baier apparently values sodomy over the tenets of his Catholic faith. And although Baier most likely wouldn’t see it that way, that message comes across loud and clear to Catholic viewers occupying the vast world outside the beltway.

Other Fox News personalities, including Jonah Goldberg, also offered congratulations to Benson, as did folks at The Wall Street Journal, The Washington Examiner, and National Review.

In so doing, they reveal they are not true conservatives, and that the Catholics among them are not fully dedicated to Catholic teaching. They have a soft spot for romantic sodomy.

Our conservative urban elites – once reliable brethren and fellow travelers – have drifted into libertarianism in order to more comfortably accommodate their sophisticated secular values.

Thanks to U.S. Sen. Dianne Feinstein, D-California, we all know that Catholic “dogma lives loudly within” Judge Amy Coney Barrett. Yet it is gay ideology that lives loudly in Baier and his colleagues.

On Monday, July 9, immediately following President Trump’s announcement of his Supreme Court nominee, Kennedy Montgomery –– host of her own show, Kennedy, on the Fox Business Network and who also appears on Fox News –– conducted a segment in which she interviewed a “married” gay couple entitled How Brett Kavanaugh could affect same-sex marriage rights. Her unwavering support for gay “marriage” was displayed throughout.

When one of the gay men suggested that there is no putting the same-sex marriage “genie back in the bottle,” Kennedy agreed, saying, “It’s not just a matter of cultural curiosity, it is something that has reached critical mass and there is now cultural acceptance and rightly so.”

“I think a lot of people think it’s time for the court to move on to other issues,” she added.

The following day, lesbian Tammy Bruce filled in for Tucker Carlson on his show.  Perhaps ironically, Bruce has been more circumspect about same-sex marriage and the heavy-handed suppression of religious liberty of Christian conscientious objectors than some of her Catholic colleagues at Fox.

In addition to Benson and Bruce, there are others leading active gay lifestyles at Fox News.

Amy Walter, national editor of The Cook Political Report who is often part of Baier’s Special Report panel, has been “married” to a woman since 2013.

Shepard Smith, who officially came out in a speech at his alma mater last year, said being gay is “not a thing. I go to work. I manage a lot of people. I cover the news. I deal with holy hell around me. I go home to the man I’m in love with.” His longtime “boyfriend,” a former production assistant on his show, was less than half the middle-aged network anchor’s age when they began dating.

Smith’s homosexuality was long known to his associates, and his pro-LGBT attitudes occasionally leapt out at viewers in editorial comments long before his “coming out.”

In 2012, Smith ridiculed “Chick-fil-A Appreciation Day,” calling it a “National Day of Intolerance.”

As far back as 2002, former Fox News heavyweight Bill O’Reilly said in an interview with gay-oriented The Advocate that he, “couldn't care less, to tell you the truth … You want to get married? Knock yourself out. Go to Vegas; have a good time.” Asked if he would oppose homosexual “marriage” if it were legalized, O’Reilly said, “If you can get that changed, I'm not going to jump up and down and say I think it's wrong, because I don't.”

Elsewhere, he explained, “I take a libertarian position on issues like gay marriage.”

O’Reilly, like Baier, is Catholic, yet LGBT ideology has lived more loudly in him, too,  than his Catholic faith.

Of all the Fox News Channel programming, “The Five” has the highest density of pro-gay sentiment among its regulars: former host Eric Bolling, Dana Perino, Kimberly Guilfoyle, Greg Gutfeld, and Geraldo Rivera.

None of this comes as a surprise. Fox News broadcasts from midtown Manhattan and Washington D.C.’s Capitol Hill. Both cities have large gay populations, with the nation’s capital boasting a higher density of gays than any state in the union.

In fact, according to Gallup, D.C. has more than twice as many LGBT-identifying individuals as the next most densely LGBT-populated state, Hawaii.

Gays and lesbians are nothing special in D.C. In fact, they are exceedingly ordinary.

In early 2015, Bret Baier pulled out of a speech he was scheduled to deliver at the Legatus Summit, a gathering of Catholic business leaders, at the request of the Fox News Channel executives.

Baier was among three high-profile speakers to withdraw from the event after the homosexual activist group “Good As You” campaigned against Legatus, calling it a “very anti-gay organization of Catholics.” The other two were actor Gary Sinise and Molson Coors board chairman Peter Coors.

In reality, Fox News and Baier were reacting against the presence of another man slated to speak at the conference, Paul Darrow, a lifelong gay man and former international male model who converted to Catholicism, now lives a chaste life, and is a member of the Courage apostolate.

In essence, Fox and Baier publicly favor sodomy for gays over and above chastity.

“I am a lifelong Mass-attending Catholic – I’m a lector at my parish. I consider myself to be in line with my Church on most things,” Baier wrote. “This isn’t about me.”

“(D)escribing homosexuality as a ‘disorder’ and talking about ways to ‘cure’ people from it – does not seem to line up with the loving, accepting Church that I know,” Baier said. “Nor does it match up with how Pope Francis has talked about the issue recently.”

Yet sometimes – not all – the Pope’s utterances about being gay don’t match up with the Church’s teaching and pastoral wisdom, and in fact, sharply challenge both.

The Catechism of the Catholic Church does indeed describe homosexual acts as acts of “grave depravity,” and the homosexual inclination as “intrinsically disordered,” while also urging that those with same-sex attraction “be accepted with respect, compassion, and sensitivity,” as we do here at LifeSiteNews.

In the shadow of the Capitol Dome seen five nights a week over Bret Baier’s left shoulder swarms a vibrant gay culture. It can no longer be called a subculture, because it is fully insinuated into daily life in the halls of power on Capitol Hill and is integrated as completely normal within D.C. national media, including the Fox News Channel.