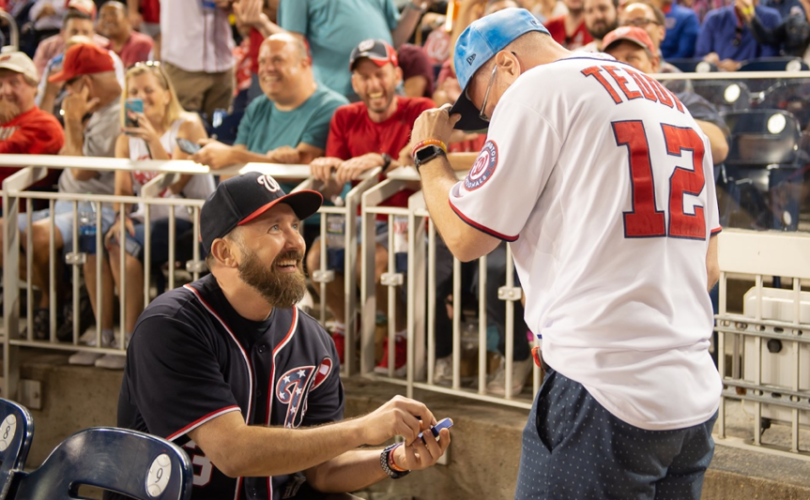 This year, every single Major League Baseball (MLB) team will have hosted a “Pride Night” except for the Houston Astros and Texas Rangers, although both of those teams have held homosexual “pride” events previously.

Teams routinely post pictures of these events on social media, treating “pride” as just another theme night, yet they simultaneously wrap these events in a mantle of social justice, hyping their promotion of “diversity” and “inclusion.”

“On the scoreboard inside the stadium, the team’s signature Curly W was painted in rainbow colors,” reported an MLB News description of the Nats’ most recent celebration of homosexuality, which took place on June 4. “The DC Different Drummers and Cheer DC performed as they welcomed fans entering the stadium via the Center Field Plaza.  The Gay Men’s Chorus of Washington gathered on the field to sing the national anthem.”

Barney Frank, the nation’s first openly gay congressman, and his “husband,” Jim Ready, stood side by side on the mound as Ready threw out the ceremonial first pitch.

“The two men followed it up with a kiss,” according to the report.

Frank gained national notoriety in the late 1980s when it was revealed that a male prostitute he had hired for sex took up residence with him and operated a prostitution service out of the congressman’s Capitol Hill apartment for two years.

“The in-game marriage proposal shown on the scoreboard in between the sixth and seventh innings featured a man proposing to another man,” continued the MLB News report, “and the 32,573 fans in attendance stood for a round of applause when he said, ‘Yes.’”

Among those fans would have been many innocent children who, though they came to watch a baseball game, ended up witnessing the absurdity of a bearded man down on one knee, proposing marriage to another man.

In celebration of the newly engaged couple, the Nationals foundation will donate $1,500 to @SMYALDMV in support of leadership development and services for LGBTQ youth.

Bean – a former outfielder for the Detroit Tigers, the Los Angeles Dodgers, and the San Diego Padres who “came out” as homosexual after his MLB career ended – was named the MLB’s first “Ambassador of Inclusion” in 2014.

“We don't have any players that are out or open,” and “I don’t know if that is on the horizon or not,” said Bean. He maintains that that’s not what’s really important. What is important to him is that all the major league teams have “bought in” to “expanding the message of [LGBT] inclusion and acceptance.”

“It’s a good sign, too, that we’re not just winning a narrow segment [of fans],” he said. “It’s broad acceptance.”

The Atlanta Hawks sent their mascot, “Harry the Hawk,” wearing “pride” flag plumage, to entertain the young children at the event, where a large man dressed as a woman read the LGBT-themed books It’s Okay to be Different and Mary Had a Little Glam.

Where will big-league sports teams draw the line?

Just a handful of big-league sports teams were holding “pride” events a decade ago.

In 2015, the NFL’s New England Patriots and MLB’s Tampa Bay Rays were among 379 corporations who signed an amicus brief asking the U.S. Supreme Court to strike down all state laws against same-sex “marriage.”

After becoming proponents of homosexuality to the satisfaction of LGBT proponents, major league sports teams are now on the cusp of throwing their weight behind transgenderism.

And why wouldn’t they? Support for the emasculation of young males is the logical conclusion of their current trajectory.

It wasn’t that long ago that comedian Rodney Dangerfied cracked up audiences with his famous line, “I went to a fight the other night, and a hockey game broke out.”

It’s conceivable, if not likely, that NHL fans in the near future might be able to say, “I went to a hockey game the other night, and a Drag Race broke out.”