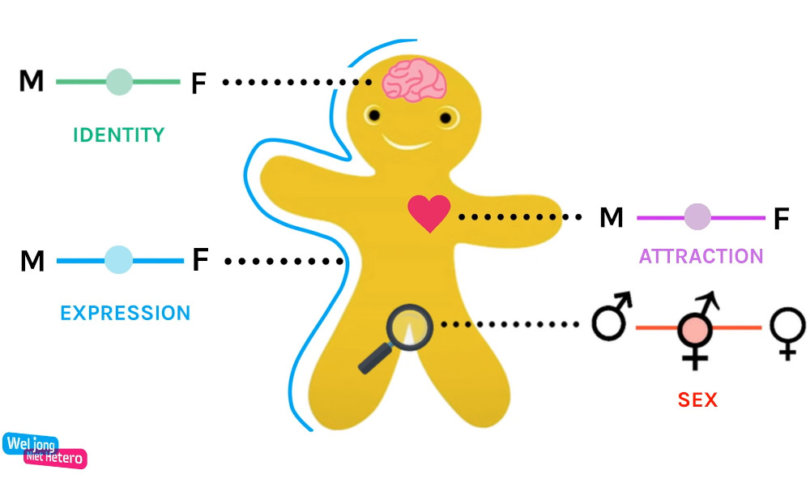 So, you want to better understand gender, or need help explaining it to someone else? Used by — and contributed to by — countless people around the world and throughout the decades, the genderbread person (and all of the different evolutions of it, and ideas it evolved from) is a wonderful way to start an important conversation. While the versions created by Sam Killermann (many of which are featured on this site), are the most popular, the idea goes far beyond him, and is a creation of the commons.

The entire purpose of the Genderbread Person is simple: To teach kids that “anatomical sex,” which is “comprised of things like genitals, chromosomes, and hormones” is not related to “gender identity,” which is “your psychological sense of self … who you, in you heard, know yourself to be, based on how much you align (or don’t align) with what you understand to be the options for gender.” And neither of these have anything to do with “attraction,” which can mean anything at all.

To sum up: The Genderbread Person is a teaching tool to inculcate kids into a worldview that tells them they can choose whatever gender they want to be (and there are scores of options); that these genders are functionally irrelevant to their bodies; and that both their “gender” and their body are irrelevant to their sexuality. This is being taught to very young children in schools from the United Kingdom to Canada, from the Royal Marines to the civil service, from Australia to the United States.

The Genderbread Person’s latest appearance is in the Hadley Public Schools in Massachusetts. The district’s sex-ed curriculum has included a 2018 YouTube video created by a Belgian LGBT group. According to the video:

Sex is biologically determined and has everything to do with what’s inside of your pants. It is often assumed that everyone is born either male or female.

The video explains that children have any number of options, including genderqueer, non-binary, bigender, genderfluid, agenda, genderneutral, pandgender, or third gender. In short: “Only you can decide which word fits you best.” You can identify how you feel, and when you feel differently, you can identify differently. In the meantime, it is the duty of society and those around you to play along with your feelings and treat you the way you identify, including (but not limited to) granting you access to the bathroom, locker room, and sports teams of your choice, as well as referring to you by your chosen pronouns.

This, of course, all leads straight into the transgender medical industry, with kids being turned into lifelong medical patients with puberty blockers, breast binders, and sex-change surgeries which often include “top surgery” — double mastectomies — or “bottom surgery” — castration and the attempt to create a crude imitation of the genitals of the desired sex. Once children or teens embark on this path, the damage is usually irreversible, and the effects — even if they attempt to “de-transition” later on — are permanent. The Genderbread Person may seem innocent, but the concepts being taught are very, very dangerous.

It gets more confusing. The video tells kids that “being heterosexual means someone is attracted to someone of the opposite gender on the traditional gender binary. By their definition, a man being attracted to a man who identifies as a woman would be heterosexual rather than homosexual.”

Mary Ellen Siegler of the Massachusetts Family Institute told the New Boston Post that this form of indoctrination is unacceptable:

The Hadley school district is acting unethically by using videos like this to teach unscientific and harmful transgender identity lessons. These lessons not only seek to reform reality by challenging the basics of the biological binary, but they trample parental rights and authority by undermining what parents teach their children about sex and gender. Instead of indoctrinating students with dangerous ideas that set them up for mental, emotional, and physical harm and that disrespect the sacred parent / child relationship, Hadley school officials need to focus on teaching reading, writing, and math.

Not surprisingly, Hadley Public Schools superintendent Anne Mackenzie could not be reached by the New Boston Post for comment. In other jurisdictions, the Genderbread Person has been pulled from schools under protest from parents. Mothers and fathers with children in the Hadley Public Schools should follow suit.