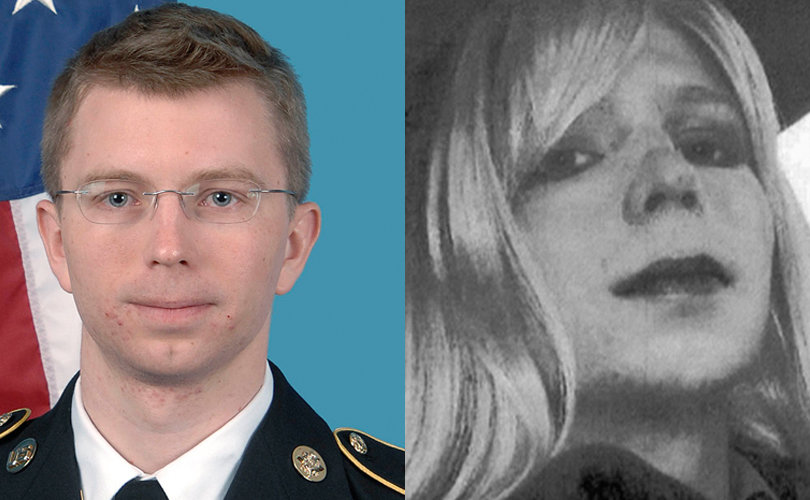 May 17, 2017 (LifeSiteNews) – Private Bradley Manning, a.k.a., “Chelsea Manning,” is expected to walk out of the military prison at Fort Leavenworth, Kansas today a free man, 28 years early.  The commutation of Manning’s sentence was President Obama’s parting shot as he prepared to leave office in January.

In his final press conference in the White House Press Briefing Room, the president said, “It has been my view that given she went to trial, that due process was carried out, that she took responsibility for her crime.”

Manning’s actions, the leaks of classified information, his prison sentence and the commutation were distractions from the real story. These provided a smokescreen for the earthshaking actual story which is found in the president’s use of two simple three letter words: she and her.

This was the first time a United States president referred to a man as she and her and it wasn’t meant as a joke.  So nobody laughed. Nobody in the press room dared laugh. The gathered erudite, the urbane, the sophisticated sat silent.

At that press conference, those humble little pronouns were not humble. They were bold and brazen. The president, the nation’s commander-in-chief, weaponized them against natural law, against complementarity, against truth, and against the Gospel. Yet for the most part it slipped past the national radar, never having registered as news.

This audacious act was merely the capstone of a long professional political history of undermining respect for human life and dignity.

As a member of the Illinois State Senate, Barack Obama never failed to oppose the destruction of nascent human life, either inside or outside the womb.  In January 2007, before the Obama campaign had taken off, Associated Press reported:

Abortion opponents see Obama's vote on medical care for aborted fetuses as a refusal to protect the helpless. Some have even accused him of supporting infanticide . . . Obama argued the legislation was worded in a way that unconstitutionally threatened a woman's right to abortion by defining the fetus as a child . . . It would essentially bar abortions because ‘the equal protection clause does not allow somebody to kill a child, and if this was a child then this would be an antiabortion statute,’ Obama said in the Senate's debate in March 2001.

Yet they are children. The complete absence of empathy for a child born during a botched abortion was stunning.

In 2006, Human Events published a story with the headline, Obama More Pro-Choice Than NARAL.  “Sen. Barack Obama (D.-Ill.) portrays himself as a thoughtful Democrat who carefully considers both sides of controversial issues, but his radical stance on abortion puts him further left on that issue than even NARAL Pro-Choice America.”

The candidate did not run from that headline.  He wore it as a badge of honor.

We had been told that Barack Obama had “never favored same-sex marriage.”  Yet, David Axelrod told the world in Believer: My Forty Years in Politics: “When President Obama said during the 2008 campaign that he did not support marriage for same-sex couples, he only did so because it was politically expedient.”

This was the first president whose administration sought not to advance religious liberty, but to squash it, turning even the Little Sisters of the Poor into enemies of the state.

And finally, according to a recent Pew Report, faith and religion plummeted among Americans during his presidency, with religious affiliation and practice dropping off dramatically during his two terms in the White House.  At the outset of his administration, those who identified as atheists or agnostics totaled only 16 percent of the U.S. adult population. Eight years later, the non-religious in America made up nearly a quarter of the population, a stunning 50% increase over a very short span of time.

Barack Obama will go down in history as having presided over a great unraveling of respect for human life and human dignity; over the devolution of marriage; over the eradication of gender; over the increase of misogyny and misandry; over transforming children from a gift from God into nothing more than commodities, into chattel, into disposable objects of adult entertainment and satisfaction, nothing more.

Obama had an uncanny knack for dragging us backward to pre-Christian, pre-Judaic times, when human dignity and human life were mostly unformed, unconsidered concepts. As it turns out, while seemingly agnostic to religion—any religion—he showed himself to be thoroughly pro-pagan, leaving our nation in a tailspin, plunging into the twilight of a new, but ancient, paganism.