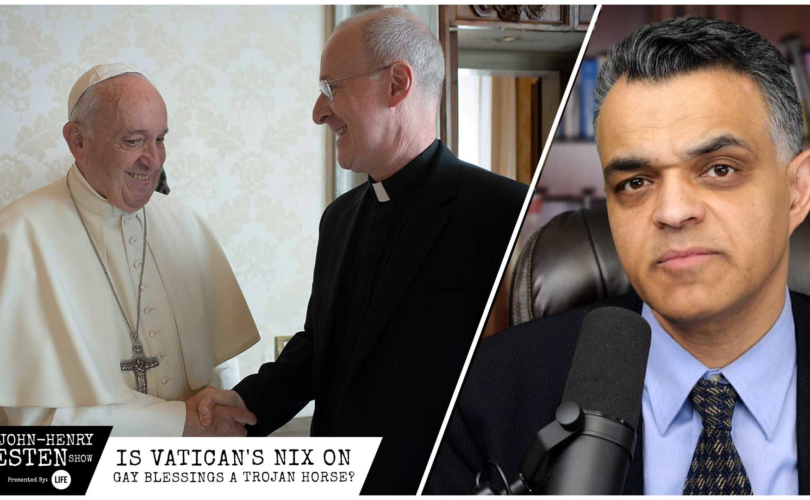 March 17, 2021 (LifeSiteNews) — How is it that Pope Francis’ Vatican has released a document forbidding the blessing of homosexual unions? Isn’t this the same Pope who famously said: “If someone is gay and he searches for the Lord and has good will, who am I to judge?” Isn’t this the same Pope who approved of civil unions for homosexual couples both in Argentina while bishop there, and just recently as Pope in a film?

Isn’t this the same Pope who met with Fr. James Martin, the most noted LGBT-promoting priest in the Church? Didn’t the Pope also appoint Martin to speak at the Vatican’s world meeting of families and appoint Martin to the Vatican’s secretariat for communications? Isn’t this the same Pope who made Blase Cupich a cardinal, after Cupich endorsed giving Holy Communion to homosexual couples?

So how could Pope Francis’ Vatican do this?

There was big news Monday from Rome with the release of a Vatican document forbidding the blessing of homosexual unions. From what I said in my intro it’s not surprising that the world was shocked at the statement, which for Catholics was nothing more than more evidence of the sad reality that such a statement was actually needed in the first place.

The famed homosexual musician Elton John was quick to tweet about the Vatican’s hypocrisy. “How can the Vatican refuse to bless gay marriages because they ‘are sin’, yet happily make a profit from investing millions in ‘Rocketman’ — a film which celebrates my finding happiness from my marriage to David?? #hypocrisy.”

The intrepid Catholic commentator Matt Archbold had sympathy for Elton’s charge over at his blog Creative Minority Report. Archbold recalled how the Vatican “had taken money that had been donated for the poor and invested in other ventures, including Hollywood movies such as Rocketman.” Quoting from a newspaper, he noted that “the Vatican’s Secretariat of State reportedly contributed £850,000 toward the biopic, which is roughly 3% of the film’s budget.”

I have to admit that I’m a little suspicious when I see something good coming out of the Vatican these days. But I always remain hopeful for signs of conversion from Pope Francis for which I pray each and every day. So, when the document forbidding blessings on homosexual relationships came out, I read it very carefully.

One line caught my eye that made me uncomfortable. It was this line speaking about homosexual relationships: “The presence in such relationships of positive elements, which are in themselves to be valued and appreciated, cannot justify these relationships and render them legitimate objects of an ecclesial blessing, since the positive elements exist within the context of a union not ordered to the Creator’s plan.”

What can be positive about these relationships when they ultimately lead to hell? While the overall statement was good and praiseworthy, this line could be dangerous, I thought — and I have to admit, I suspected an agenda.

It’s not without reason. I recall vividly the mid-term report of the extraordinary synod on the family in Rome in 2014 which contained similar language saying, “Homosexuals have gifts and qualities to offer to the Christian community.” It then asked: “Are our communities capable of providing [them a welcoming home], accepting and valuing their sexual orientation, without compromising Catholic doctrine on the family and matrimony?”

At the Vatican press conference when the document was released, Michael Voris of Church Militant challenged the wording, asking, “Are the synod fathers proposing that ‘gifts and qualities’ flow from the sexual orientation of homosexuality?” he asked. “Is the synod proposing that there is something innate in the homosexual orientation that transcends and uplifts the Catholic Church, the Christian community, and if so, what would those particular gifts be?”

So, could this new Vatican document which is seemingly so good and accepted by so many of the good in the Church be a trojan horse bringing with it the eventual destruction of the very teaching it seems to uphold?

There is definitely precedent for that in Pope Francis’ history. Do you remember when Pope Francis in one of his public remarks totally contradicted the Church’s teaching against contraception, and then it was confirmed as such by the Vatican Press Office? It is an incident which could be important to consider with this new Vatican document.

As he was seemingly overturning the Church’s teaching on contraception, Pope Francis did it in the midst of his strongest ever condemnation of abortion. He said abortion is a crime and compared abortionists to the mafia. “Abortion is not the lesser of two evils. It is a crime. It is to throw someone out in order to save another. That’s what the Mafia does. It is a crime, an absolute evil.” Wow.

The statement was praised by pro-life groups everywhere. But in that very same answer he threw the teaching of the Church against contraception under the bus. He said contraception was the lesser of evils and could be used in cases where there was a risk of zika virus transmission. And the Vatican press secretary confirmed that the Pope was indeed approving of the use of “the possibility of taking recourse to contraception or condoms in cases of emergency or special situations.”

And finally, there is now some evidence that the Vatican document was a trojan horse, as the soldiers for the anti-Church most pushing the LGBT and leftist agenda are working on that very phrase. The vanguard of the ecclesial left is in Germany and officially called the Synodal Path. An email communication to the group, which was sent to LifeSiteNews, notes that they will be studying the new Vatican document carefully.

Bishop Helmut Dieser is quoted as highlighting the positive assessment of homosexuality by the Vatican’s Congregation for the Doctrine of Faith. “On the one hand, it is assumed and thus recognized that there are homosexual couple relationships,” he said. “On the other hand, it is said that there are positive elements in them that are to be valued and emphasized, so that they must be treated with respect and tact.”

“Oh, come now,” you might say, “how could a document specifically forbidding the blessing of homosexual unions be used to infiltrate the church with the eventual aim of allowing for such blessings?” In exactly the same way that the laws were changed to allow for same-sex “marriage”. Remember Biden and Obama, when they were promoting same-sex civil unions and being all against homosexual “marriage” and all about marriage between a man and a woman? It was the thin edge of the sword. It was the trojan horse that brought in homosexual “marriage,” and now it’s enforcement.