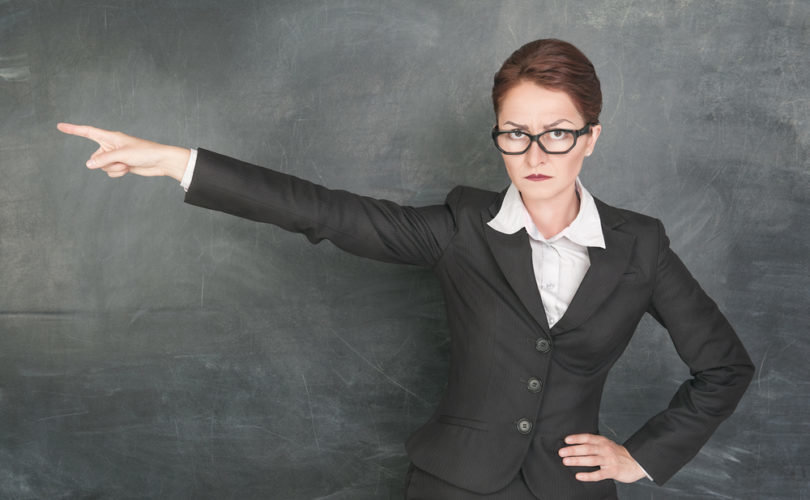 If there's anything that the pornogogues don't allow in the classroom, it's great poetry, because that might introduce students to real beauty and wisdom.Shutterstock

Several years ago, I was rummaging about a used furniture store in Antigonish, a college town in Nova Scotia. It was September, I was on sabbatical, and yet the urge to teach got the better of me when three young men entered the store, obviously looking for a few cheap things for their dormitory. They were freshmen, all Canadians, though one of them had gone to high school in Washington, D. C.

I could not resist. “I'd like to know a little about what they teach and what they don't teach in school these days,” I said. “I'm going to name a few famous writers. You tell me if you recognize the names. You don't have to tell me anything about them. I just want to know if you've ever heard of them.” They were up for the game, so I started naming English poets.

I tried Dante. “Dante's Inferno?” asked one of the boys. “All right, that's something,” I said. “Do you know anything else about him?” No, he said; it was just that Dante's Inferno was a video game.

I tried Homer. “He was Greek, wasn't he?” asked the same boy. “I don't know anything else, though. But literature isn't really my strong suit,” he said. He was going to be a biogeneticist, and in fact he and his friends seemed to be pretty bright. Their brains weren't the problem. They had just never had an education.

So I named a prominent historical figure. “Hannibal?”

I've since tried the same experiment with my own college freshmen, with similar results – except that students who have been homeschooled or who have gone to more traditional Catholic schools fare much better than the rest. I am now regularly meeting students who have never heard of Chaucer.

They tell me that they spent very little time on poetry in school, sometimes only a “unit,” usually taken up with contemporary political doggerel. For this, I have to open one of my veins every year and bleed five thousand dollars into the local school district, not to mention the additional pounds of flesh I have to cut and toss to the state and federal piranhas of miseducation.

In my last essay I said that the exodus of sane people and their children from our public schools, and from all schools that follow their lead, is long overdue. It isn't just that I don't trust Mr. Pornogogue to teach children about sexuality. I don't trust Mr. Pornogogue to teach anything at all, nor do I trust the people who would hire him, or who establish curricula to his liking. I don't graft healthy slips onto a rotten stock.

It is no wonder that schools run by the Pornogogues have no use for Milton or Keats or Tennyson. These are our allies even when they are not explicitly religious; they are our allies because they love beauty, and they are human.

But it occurs to me that Mr. Pornogogue has a dreadful weakness. If we are rightly disgusted by his using his position as a teacher to recommend sodomy in the sunshine to impressionable children, or to bend their “genders” into pretzels, we should understand that there are things that repel him too, that he will do all he can to avoid; or to make of them as little as possible, to flatten them, or pervert them beyond recognition. One of those things – and there are many others – is great poetry.

Suppose you have the diseased mind of Mr. Pornogogue. Perhaps you are like the imbecile feminist professor at a state college in my country, who gives extra credit to female students who do not shave their armpits, or to male students who shave off all their hair below the neck. Perhaps you are like the creepy fellow in a formerly Moravian university, whose “project” was to get his male students to dress in drag. The last thing you really want to do is to bring real beauty and wisdom to their consciousness. You aren't interested in that stuff, just as a man in the grip of a beastlike vice has to shy away from the beauty of youthful chastity, or snort at it in contempt. He has to betake his amphibious form down into a dark wet hole, there to dwell in the muddy grip of his compulsions.

So it is no wonder that schools run by the Pornogogues have no use for Milton or Keats or Tennyson. These are our allies even when they are not explicitly religious; they are our allies because they love beauty, and they are human.

I am thinking of the final stanza of what may be the loveliest lyric poem in English, Keats' “Ode to Autumn”:

Where are the songs of Spring? Ay, where are they?
Think not of them, thou hast thy music too, –
While barred clouds bloom the soft-dying day
And touch the stubble-plains with rosy hue;
Then in a wailful choir the small gnats mourn
Among the river sallows, borne aloft
Or sinking as the light wind lives or dies;
And full-grown lambs loud bleat from hilly bourn;
Hedge-crickets sing, and now with treble soft
The redbreast whistles from a garden-croft;
And gathering swallows twitter in the skies.

Every student in every school in every English speaking land should hear these words, and almost none of them will. They say nothing about politics. There is nothing lurid or lewd about them. They are not pretty; they are beyond that. They are sublime. And yet their sublimity is quiet, as it were hidden in the art of the poet and in the simplicity of the things he describes. We have the level clouds in the west as the sun sets, just shading with rose the warm brown of the field of stubble after the reaping; we have the low hum of the simple gnats down by the weedy river, rising or falling with the wind; the lambs on the hillside; crickets still in the hedges, the redbreast still here to sing, and the swallows, still here but probably on their way south, just before the chill of winter to come.

Keats has said nothing about death, but it is there, like a shadow, a gentle one, not to be feared. His ode is sweet and sad, a companion for life. You cannot do anything political with it. You cannot do anything at all with it, no more than you can do anything with a sunset, or the warm pressure of a friendly hand. It brings beauty that clears the mind of what is merely ugly or crass or squalid. It is fresh air, God-sent.

A true school is one in which the teacher's second-highest aim will be to raise students whose hearts beat warmly to the impulse of such beauty.

What does this have to do with cherishing human life? Still more to come.