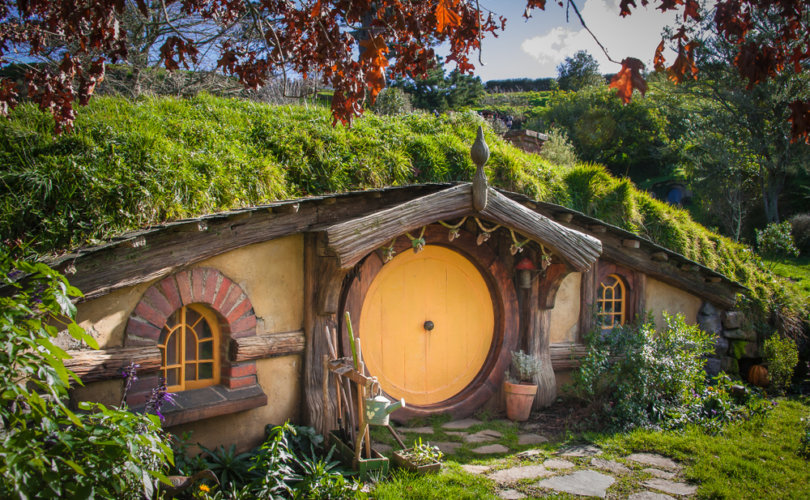 Hobbiton movie set created to film Lord of the Rings and The Hobbit.By Linda_K / Shutterstock.com

December 19, 2019 (LifeSiteNews) — In reading the new book Beyond Tenebrae: Christian Humanism in the Twilight of the West (Angelico Press, 2019) by conservative biographer and Hillsdale professor Brad Birzer, I discovered a fascinating fact about Tolkien’s great work The Silmarillion, published posthumously in 1977.

In the copious and not terribly well organized notes for The Silmarillion that were given final form by his son and literary executor Christopher, JRR Tolkien had included a conversation between an elf and a human wise woman, called Athrabeth Finrod ah Andreth (“The Debate of Finrod and Andreth”). As Birzer relates:

The conversation deals with the possible Incarnation of Eru (God the Father) in the world. How could an author enter into his book without exploding it? How could God enter into His creation without destroying it? Tolkien had written a note on the manuscript of the conversation stating — in no uncertain terms — that this conversation must serve as a central part of the final, published version of The Silmarillion. I can state without exaggeration that this conversation explains and describes the Incarnation more expertly and with more beauty than anything I’ve ever read (with the important exception of T.S. Eliot’s “Little Gidding”). And yet, pick up your copy of The Silmarillion. Thumb through it, and you’ll see no such conversation. As literary heir, Christopher chose to exclude all explicit theological and philosophical discussions, focusing instead on the mythological narrative of the story. This vital conversation that reveals so much about Tolkien and his mythology did not see print until volume 10 of the History of Middle-earth: Morgoth’s Ring. (Birzer, 157–58)

Birzer says elsewhere in the book (121–22) that he no longer holds Christopher at fault for some of the hard editorial decisions he had to make in preparing so much material for publication. Christopher at times made decisions based on what he believed would best represent Tolkien to various readerships, and he also wished to allow his full legacy to emerge gradually, as the receptivity grew.

Nevertheless, it is striking to consider that some of the most profound pages Tolkien ever wrote about the central mystery of Christianity had to wait until 1993 to see the light of day, although Clyde Kilby, an English professor from Wheaton, had seen them already in 1966.

In his profound philosophical and theological analysis of the works of JRR Tolkien, The Flame Imperishable: Tolkien, St. Thomas, and the Metaphysics of Faërie (Angelico Press, 2017), Jonathan McIntosh summarizes and quotes from this dialogue, Athrabeth Finrod ah Andreth (internal page numbers refer to volume 10 of the History of Middle-earth):

At one point in their conversation Andreth tells Finrod about a “rumour” reported amongst those Men of the “Old Hope” that one day “the One will himself enter into Arda, and heal Men and all the Marring [of the world] from the beginning to the end” (321). Andreth, who for her part does not believe the rumor of the Men of the Old Hope, since “all wisdom is against them,” raises the following, reasonable objection: “Eru is One, alone without peer, and He made Eä, and is beyond it; and the Valar are greater than we, but yet no nearer to His majesty…. How could Eru enter into the thing that He has made, and than which He is beyond measure greater? Can the singer enter into his tale or the designer into his picture?” (321–22). Finrod replies by reminding Andreth of the simultaneity of Eru’s immanence and transcendence, stating how Eru is in fact “already in it, as well as outside,” to which Andreth agrees but replies that the legend speaks rather of Eru “entering into Arda, and that is a thing wholly different.” When Andreth asks how this could be possible without the Earth — indeed, without created reality itself — being “shattered,” Finrod pleads ignorance, though he does not doubt that, should Eru purpose to accomplish it, “he would find a way,” but that, if “he were to enter in, He must still remain also as He is: the Author without.” … For Tolkien, Eru’s ability to be simultaneously immanent within while transcendent to his creation, as his metaphysics of eucatastrophe requires, is directly connected with a kind of Trinitarian complexity or distinction within Eru’s own being. (McIntosh, 69–70)

“How could Eru enter into the thing that He has made, and than which He is beyond measure greater? Can the singer enter into his tale or the designer into his picture?” The answer: “He would find a way.”

Wisdom will dictate the way; love will endorse it; omnipotence will produce it. As the great scholastics of the Middle Ages put it: Potuit, decuit, ergo fecit— He could do it; it was fitting that He do it; therefore He did it. Or, as Pope Benedict XVI said in a Christmas homily:

God is so great that He can become small. God is so powerful that He can make Himself vulnerable and come to us as a defenseless child, so that we can love Him. God is so good that He can give up [the manifestation] of His divine splendor and come down to a stable, so that we might find Him, so that His goodness might touch us, give itself to us and continue to work through us. This is Christmas: “You are my son, this day I have begotten you.” God has become one of us, so that we can be with Him and become like Him. As a sign, he chose the Child lying in the manger: this is how God is. This is how we come to know Him.