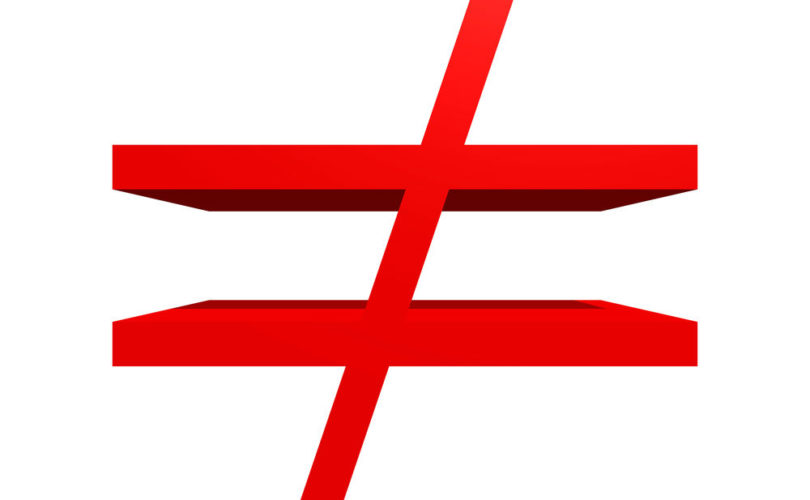 Words have meaning. Well, until we decide to strip that meaning from them by expanding their definition to suit our ideology. “Equality” is a concept that is thrown about all the time.  Ensuring it has become a religion with the devout willing to do anything to force it upon everyone.

Recently, homosexual “rights’ groups continued their attacks on TLC’s Duggar family for supporting our First Amendment freedoms by encouraging the repeal of an intrusive and unconstitutional Chapter 119 city ordinance. Just one provision from the ordinance tells you how far LGBT activists will go to muddle reality: “Discriminate, Discrimination or Discriminatory means any act, policy or practice that has the effect of subjecting any person to differential treatment as a result of that person’s real or perceived race, ethnicity, national origin, age (if 18 years of age or older), gender, gender identity, gender expression, familial status, marital status, socioeconomic background, religion, sexual orientation, disability, or veteran status.”

Ok, wait. So if someone is black, it could just be a perception thing? One’s veteran status could be real or perceived?  The rhetorical acrobatics one has to go through to justify LGBT activism is mind-bending.

In addition to establishing the unscientific assertion that gender is simply a fluid personal choice and that homosexuality is equivalent to innate characteristics like pigmentation and age, the ordinance also declared that transgendered people (with no proof that they are actually “transsexual”) can use the public bathroom of their choice.

The Duggars, churches, business owners and the majority of Fayetteville, Arkansas residents (52%) passionately disagreed with the Chapter 119 Ordinance and voted to repeal it.

Homosexual activists are always invoking the Fourteenth Amendment (while conveniently ignoring the First Amendment) and demanding “equal protection”. Well, what about equal protection for women and girls? So, an infinitesimal percentage of the population’s emotional discomfort should overshadow the privacy and safety of females?

Before an LGBT activist spits a rainbow, I’m not saying that every transgender person is violent, but it creates an understandable atmosphere of concern. Most, especially parents, understand this.

Laverne Cox, a transgender male who stars in Netflix’ sexually explicit and violent prison dramedy, Orange is the New Black, made a public stand for a fellow transgendered male—a convicted rapist and murderer. Laverne was featured in a video for the Silvia Rivera Law Project supporting Synthia China Blast. The transsexual male’s internal brokenness led him to commit the heinous 1993 rape and murder of 13 year old Ebony Nicole Williams, a young black runaway from Harlem. Her mutilated and molested corpse could only be identified by dental records.

But like most identity politics the person who aligns with your ideology can do no wrong. Once news reports criticized his support of a convicted rapist and murderer, Laverne Cox apparently went into public relations mode and requested that his support video be removed.  (You can still view it here w/ commentary). You would think Laverne would’ve Googled the prisoner’s name to find out why he was actually convicted before he publicly defended Luis Morales (aka Synthia China Blast).

Too bad Ebony Nicole Williams didn’t get equal treatment from Laverne Cox or the Sylvia Rivera Project, which demands humanity for convicted transgender prisoners but ignores the grotesque inhumanity shown toward their victims.

Our hashtag-driven society rarely looks beyond the buzz words to the content that gives context to LGBT issues. The inequality of “equality” is spreading like wildfire across the country, and many of these efforts are led by HRC (Human Rights Campaign), a leading gay “rights” group. I find it interesting how multi-million-dollar LGBT activist groups, who decry “discrimination” against homosexuals, are some of the leading voices in the support of the ultimate violent discrimination—abortion. HRC is even directly funded by Planned Parenthood, according to the abortion chain’s most recent tax filings (2013 and 2012).

Incidentally, the pro-abortion founder of HRC, Terrance Patrick Bean, was recently convicted by a grand jury for allegedly raping a 15-year old boy. Of course, the group he founded is also behind criminalizing any therapy or counseling for minors with unwanted same-sex attraction that is the result of sexual molestation. How convenient.

People need healing from sexual trauma and sexual confusion. And those with gender identity disorder don’t need taxpayer-funded “reassignment surgeries” that are now covered by Medicare, thanks to a policy change from the Obama administration earlier this year. In an Op-Ed in the Wall Street Journal, the former psychiatrist in chief at Johns Hopkins Hospital, Dr. Paul McHugh, described why they stopped “sex-change” surgeries at the world renown medical facility: “Most of the surgically treated patients described themselves as ‘satisfied’ by the results, but their subsequent psycho-social adjustments were no better than those who didn’t have the surgery. And so at Hopkins we stopped doing sex-reassignment surgery, since producing a ‘satisfied’ but still troubled patient seemed an inadequate reason for surgically amputating normal organs. At the heart of the problem is confusion over the nature of the transgendered. ‘Sex change’ is biologically impossible. People who undergo sex-reassignment surgery do not change from men to women or vice versa. Rather, they become feminized men or masculinized women.” Dr. McHugh continued: “When children who reported transgender feelings were tracked without medical or surgical treatment at both Vanderbilt University and London’s Portman Clinic, 70%-80% of them spontaneously lost those feelings.”

But you won’t ever hear that from the liberal mainstream news media organizations that regularly meet and cooperate with LGBT groups in promoting their distortion-filled agenda.

Instead, mainstream media works overtime to present homosexuality, bisexuality and transgenderism in the most positive light possible. Anyone who dares to challenge the emotionally-charged propaganda is branded a “hater”. Well, the only thing I hate is a lie. I love people and know how powerfully love can illuminate and elevate the human condition. Doesn’t everyone deserve the truth?  No one is free when our words are policed, our faith is legislatively dictated, and facts are forced into the closet.