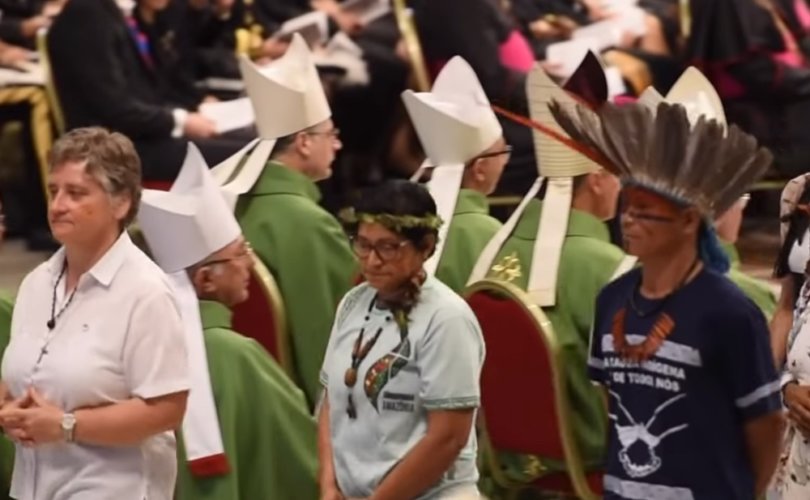 October 25, 2019 (LifeSiteNews) – Pope Francis has an enthusiasm for images and metaphors. The Church is a “field hospital,” shepherds should “smell like the sheep,” etc. This week, he tried out a new one. The Church, he said at his Wednesday audience, is not a fortress. It is, rather, an “expandable tent,” a tent that “always has its doors open” and is “on the move.”

Someone (I don’t remember who), sardonically remarked on Twitter: “So, like a circus tent.” I admit it, I laughed. The image, I’m afraid, feels a little too apt at the moment. Indeed, if the goings-on at the Vatican these days didn’t have such a sinister undercurrent, they would surely be funny.

To wit: Today, at a Vatican press conference, the head of the Vatican Communications department – Paulo Ruffini – categorically denied that anybody prostrated themselves in front of that now-too-familiar wooden statue during a ceremony in the Vatican gardens. More than this, he denied that any such ceremony even took place. The exact quote: “There were no rituals. No prostration took place.”

But alas for Ruffini, merely saying something is so, does not make it so. The video of the event is quite unambiguous. It shows a dozen or so people bowing down before the statues during some sort of ritual conducted in front of the pope. And so, we now have the twilight-zone experience of reading news articles about how the Vatican communications head has said something did not happen, illustrated with crystal-clear photographic evidence that it most certainly did.

Strangely, after Ruffini made this obviously false declaration, another Vatican official, the deputy director of the Vatican press office, began to applaud. So did several others in the hall. Applauding what, exactly? Heaven knows.

Another example: Over the past few weeks, a handful of curiously tenacious defenders of the Amazon synod have insisted that the wooden statue of the pregnant woman making the rounds  is not a representation of the Incan fertility goddess Pachamama (as some have claimed), but rather of the Blessed Virgin Mary. They base this claim upon video that appears to show (it’s hard to hear) that the woman who presents the statue to the pope in the Vatican gardens calls it “Our Lady of the Amazon.”

Skeptics might well point out that, given the kind of religious syncretism on display at various points in the synod, it’s well worth asking whether the woman meant by “Our Lady of the Amazon” what most Catholics would mean by that phrase. But there is no need to go down that rabbit hole, since literally nobody else who had anything to do with the synod seemed to know what these defenders knew with such iron-clad certitude. Not the officials presiding over the synod (who seemed strangely unconcerned with the whole question), nor the indigenous volunteers responsible for displaying the statues at a nearby church – who happily agreed that the statue represents Pachamama.

And so, over the past two weeks barrels of tweets have been spilled by the likes of Austen Ivereigh, Dawn Eden, and Massimo Faggioli in excoriating the racist fundamentalists who argued, in the face of the evidence, that the statues represented Pachamama, and (what is worse) committed the “violent” act of tossing the statues into the Tiber River.

Which brings us to today, which is when the pope threw the proverbial spanner in the proverbial works. Today, the pope announced that the soused statues had been fished out of the Tiber by the Italian police. The pope apologized in the synod hall on behalf of those who had disposed of the carvings, during which apology he referred to them as …”Pachamama statues.”

Now, given that Ivereigh, et al. seemed to think it mightily important that the statues should represent the Virgin, and not an Incan fertility goddess, one might think they would now change their tune, and express their own concerns that an image the pope himself apparently takes to depict a pagan fertility goddess was apparently worshipped in the Vatican gardens. Alas, as we have learned, this is not how it works (Ms. Eden, it seems, has already found a way to square the circle).

One more, for good measure: Yesterday, the Vatican’s favorite celebrity priest, Fr. James Martin, posted on Twitter a quote from a book by a protestant theologian that asks whether the Bible might not be wrong when it consistently condemns homosexual behavior. Fr. Martin posted this quotation with a single interposition of his own: “Interesting.” Now, he didn’t say exactly what about the quote he found interesting. But for anybody who knows anything about his … preoccupations … it wasn’t hard to connect the dots.

But when certain bishops, priests and lay Catholics called out Fr. Martin for seeming to promote a heterodox interpretation of Scripture and erroneous moral theology, he reacted with what one can only hope, for his sake, is faux surprise and outrage. After all, he protested, he had never said he agreed with the quotation he posted, he just happened to find it interesting. A response that was, one might venture to say, a tad Jesuitical.

I could go on (i.e. Did someone in the Vatican communications office really alter synod critic Dr. Taylor Marshall’s Wikipedia article to include childish lies and slander?; did papal biographer Austen Ivereigh really suggest that the men who dunked the Pachamama statues are worse than ISIS terrorists?; did curial officials really divert hundreds of millions of dollars collected on behalf of the pope for the poor toward highly suspect investments in luxury real estate?; did the pope really expend his breath finding sinister symbolism behind various clerical hats?; did an Amazonian bishop really boast about not having baptized a single Amazonian indigenous person in his 25 years as a “missionary”?; did a bunch of bishops and clerics really go to the catacombs, of all places, to sign this theologically insipid pledge, which included a promise to help preserve indigenous “spiritualities”?)

The hard truth is this: Many younger Catholics like myself, who grew up accustomed to the serious, meaty moral and mystical theology of John Paul II and Benedict, have long since stopped looking to the Vatican for anything like spiritual nourishment. It’s not that we have any delusions that things were perfect under JPII and Benedict (after all, it’s impossible not to think the thought that many of the prelates causing this chaos now were appointed by Francis’ predecessors). But we are weary.

We are weary of the drama, intrigue, and confusion; of the parade of prolix, unreadable and fuzzy papal documents and interviews; the depressing social media wars over matters that the pope and the Vatican could clear up in a moment, if they so chose; the stream of papal abuse against priests and laymen who have the slightest preference for the traditional, contrasted with the unqualified enthusiasm for sworn enemies of the Church; the elevation of the peripheral over the theologically essential, and the relegation of the theologically essential to the periphery; the pervasive puerility, shiftiness and Orwellian double-speak; and the growing body of evidence of metastasizing and unchecked financial and moral corruption among the curia. And, all in all, the dispiriting triviality of it all.

So, what then? What are we to do? How are we to respond to all this chaos, this sideshow, this spiritual circus?

I don’t know really. We are adrift amidst dark and uncharted waters. But here’s a little suggestion. I have, in my office in the basement of our house, a corner set aside. In that corner I have a double-sized prie dieu. It is made of oak, crafted for me by a friend. I gave it to my wife for one of our anniversaries. On the wall is a crucifix, and a pair of sconces with two candles each. Sometimes – less often than I should, I freely admit – I light those candles, and kneel down, and open the Gospels, or a book on prayer by a saint, and I read a little, and then I close my eyes, and I pray. I really, really pray.

And when I do this, something within me changes. I am no longer distraught in the least at all this chaos. I no longer harbor any grudge against those I think are sowing confusion and chaos. Quite the contrary. I pray for them. Not with an ironic prayer (“I’ll pray for you,” we say passive-aggressively to those we disagree with on social media), but with a heartfelt prayer. Most of all, my eyes are opened to the fact that the greatest cause of the chaos in the world is my own sinfulness, my own personal distance from God. And I have an intense sense that I am doing precisely what I should be doing, and an intense desire to get better at it. And that getting better at it (praying, that is) is ultimately the one and only thing that really matters, and that if I did that, a great number of other things would begin to fall in place.

Lately, my wife and I have begun to pray the rosary every night with our six young children. We light a couple of candles in front of a framed copy of that famous painting of the Annunciation by Fra Angelico. We sing Immaculate Mary. We say who we will pray for – all the sick, needy people we know in our lives and in the world. Our eldest child is 10 years old, and the youngest is one, so things can get a little chaotic sometimes. The littlest children tumble and sprawl on the floor. But it feels peaceful. It feels like we’re doing what we’re supposed to be doing.

The Church is not a circus tent. It is the Ark, the Bride, the mystical Body of Christ. I honestly have no idea how to solve curial corruption and theological high-jinks coming from the highest strata of the Church. For some people it will mean fighting it head on. For others, focusing on more local efforts. But I do know that for all of us, despairing, or losing hope, or losing our peace of mind, or letting the chaos disturb our prayer life, or giving up our prayer life, is certainly not the solution. It can feel trivial to say that we should respond to this confusion by praying more. But when I say prayer, I don't mean the rattling off of prayers. I mean what the saints meant by prayer, and what Christ Himself did in the desert and in the Garden of Gesthemane – the placing of ourselves in the presence of the Living God, the communing face-to-face with He Who IS, and the comforming of our will to His perfect will. And surely there is absolutely nothing trivial about that.