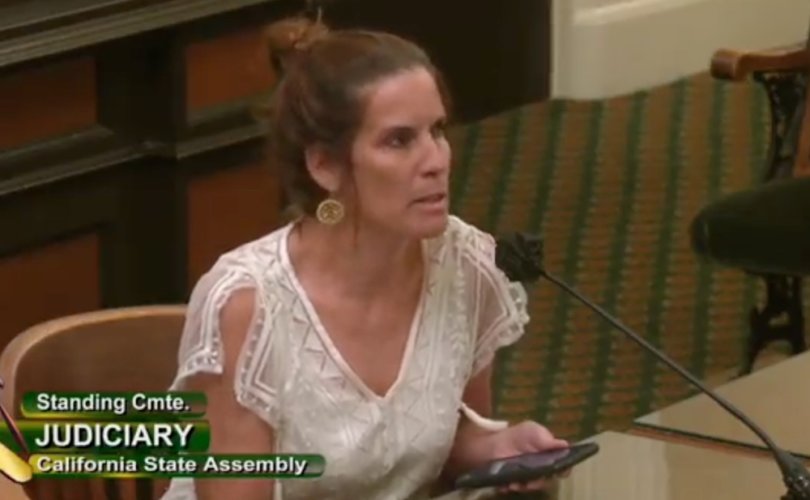 SACRAMENTO, California (LifeSiteNews) — Erin Friday, a Democratic parent of a daughter who was previously “transitioned,” warned the state not to become a “a refuge for what will be seen as the largest medical scandal in history.”

Her June 8 comments were in response to Senate Bill 107, pending legislation that started as a proposal about social services spending and then was stripped and redone by Democrat Scott Wiener. Wiener, who is a homosexual, has suggested that drag queen shows should be part of K-12 curriculum. He also supports children getting jabbed without their parent’s knowledge.

“Parents in the state of California have lost custody of their children merely by calling their child by their legal name,” Friday said, noting that Wiener has no kids. “California cannot just wipe away an out of state agreement addressing which parent controls the medical health of a child.”

🧵…the remainder of Erin Friday’s testimony today in Sacramento against Scott Wiener’s SB 107, which would make California a Sanctuary State for families of children seeking “Gender-Affirming Health Care”https://t.co/mMeT7gVzl6 pic.twitter.com/HlbSQnDPxY

The law would require California to become the “exclusive” jurisdiction for making child custody claims. Currently, judges can defer to other states if it is more appropriate for that state to make the determination.

The law, if enacted, would practically make California a sanctuary for a parent who wants to take away a kid from the other parent in order to have him or her chemically or genitally mutilated, sometimes called “gender-affirming care.”

Friday is a leader in a group called “Our Duty” which opposes the chemical and genital mutilation of children. She noted that other countries are moving away from permissive standards.

“Look to Sweden, Finland, Norway, the U.K. and France,” she said in her testimony. “You need to be 100% confident that sterilizing children is truly life-saving,” she said.

In reality, of course, no person can change their gender and all medicine that in any way seeks to “affirm” someone is a different sex should be prohibited. But the issue can be scarier among children, when they are making irreversible decisions, often prodded, I believe, by parents and friends to block puberty and cut off healthy body parts.

Friday noted that transgenderism is a “social contagion” and parents know this from personal experience.

“We parents know it’s a social contagion as we watch clusters of friends groups come out as trans. It’s not organic,” Friday warned.

She questioned the claims that “trans medicine” prevents suicides, noting that gender-dysphoric individuals are continuing to experience “severe depression” and are killing themselves even as “trans medicine” becomes more available.

READ: ‘Detransitioner’ tells all in horrifying account of what ‘gender affirmation’ really means

Her claims about transgenderism being a social contagion are supported by research from Eric Kaufmann, a social scientist with the University of London. Kaufmann linked the rise in identification as LGBT to it being “trendy” and tied it to mental illness and liberal political beliefs.

He also said that identification as LGBT has risen faster than LGBT sexual behavior, “indicating that people with occasional rather than sustained feelings of attraction to the opposite sex are increasingly identifying as LGBT.”