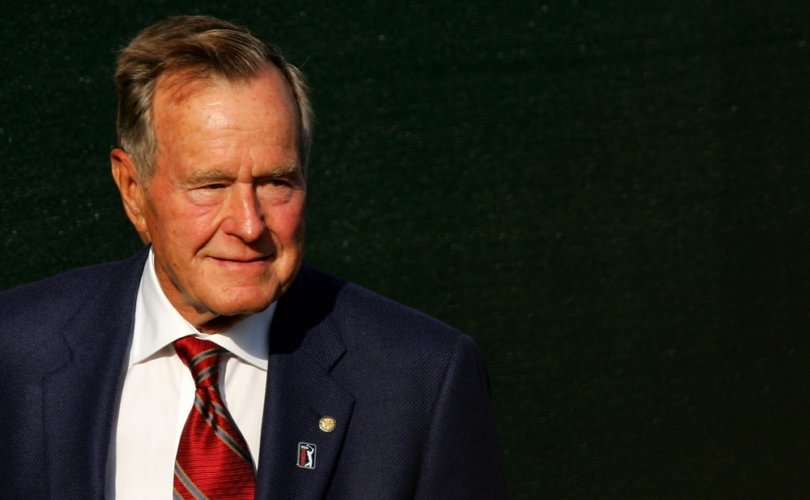 December 5, 2018 (LifeSiteNews) – With the passing of President George H.W. Bush, the last president to have served in World War II, there has been an outpouring of bipartisan sympathy. President Trump has declared December 5 to be a national Day of Mourning, and ordered all the flags to half-staff for 30 days. Obama and Clinton both spoke kindly of their predecessor. And at the Capitol, thousands of people are still lining up to file past his casket and pay their respects. As Russell Moore of the Southern Baptist Convention noted: “George H.W. Bush was one of this country’s best presidents, and one of the best men to ever serve as this country’s president. He served with character, integrity, and competence. We will miss him more than we even realize.”

Not all are treating the departed president with kindness, of course. Gay activists have been taking the opportunity to speak savagely of him, just as they did when Billy Graham died earlier this year. The accusations are standard: They claim he was not committed enough to addressing the AIDS crisis, he spoke of homosexuality as “not normal,” and opposed gay parenting in even stronger terms, stating that, “I can’t accept as normal [the] lifestyle of people of the same sex being parents. I’m very sorry. I don’t accept that as normal.” Even though he and Barbara attended a much-publicized same-sex union in 2013 as witnesses, Bush still clung to his beliefs, telling his biographer in 2015 that although he had “mellowed,” he had not changed his mind: “Personally, I still believe in traditional marriage.”

On abortion, too, Bush’s record is unacceptable to progressives: He became powerfully pro-life. He is often not recognized for this due to the fact that his position evolved over time—he was pro-abortion when he joined the Ronald Reagan ticket in the leadup to the 1980 election, and had said as much publicly. He joined Reagan for several meetings with pro-life activists, and listened quietly and carefully. It was Dr. Jack Wilke of National Right to Life who knocked on his hotel room door on the campaign trail shortly after he became Reagan’s running mate, and asked Bush if he could sit down with him and explain the pro-life position. Bush agreed to have his secretary set up a meeting. Wilke informed him that he’d like to have at least four hours, and noted that Bush would need pro-lifers to get elected. Bush agreed to have Wilke come up to his house in Maine to give him a presentation.

On a beautiful summer morning in 1980, Wilke later recalled, he drove up to the Bush compound in Kennebunkport and spent two and half hours going through a slideshow, the projector sitting on the coffee table (and Barbara in the next room). At lunch, Wilke asked Bush directly where he stood on the pro-life issue. When I came in this morning, he told Wilke, I was not on your side. But I think you’ve changed my mind. Bush committed that day to supporting the overturn of Roe v. Wade, and when Wilke challenged him to share that promise with several pro-life activists who joined them for the afternoon, he willingly did so. And as president, his Justice Department asked the Supreme Court to overturn Roe at every opportunity. (Most notably, his Attorney General Dick Thornburgh asked the Court to overrule Roe in its landmark 1989 decision Webster v. Reproductive Health Services.)

Bush 41 was not always adept at addressing the pro-life issue—his verbal mishaps were as famous during his career as his son’s would be a decade later—and as such, he was sometimes more persuasive by making the issue personal rather than abstract. During the October 13, 1988 debate with Michael Dukakis, he explained how one of his grandchildren—his son Marvin Bush and his daughter-in-law Margaret adopted two children—informed his position on abortion. “I think human life is very, very precious,” he noted. “And look, this, hasn’t been an easy decision for me to meet. I know others disagree with it. But when I was in that little church across the river from Washington and saw our grandchild christened in our faith, I was very pleased indeed that the mother had not aborted that child, and put that child up for adoption. And so I just feel this is where I’m coming from. And it is personal. And I don’t assail [Michael Dukakis] on that issue, or others on that issue. But that’s the way I, George Bush, feel about it.”

Bush’s pro-life position fit into his desire for a “kindler, gentler” nation—Karl Rove noted that he was horrified when he discovered that abortion was becoming increasingly common. “Bush's mind worked by drawing on deeply engrained principles, and he constantly sifted information,” Rove recalled. “This made him open to profound growth. He read that the number of abortions in D.C. had eclipsed the number of live births. This callousness toward life deeply disturbed him and he began moving more firmly into the pro-life camp. It wasn't as if he were at one point on the continuum one day and at the opposite point the next day. He had a constantly engaged mind, a habit he passed on to his children.”

As president, Bush upheld the Mexico City Policy, and vetoed an entire Labor-HHS spending bill when Congressional Democrats attempted to loosen the Hyde Amendment restrictions on abortion funding—and according to National Right to Life, he would veto a total of ten bills that lacked pro-life protections like Hyde—an enormous change from his co-sponsoring of Title X in Congress. Although he was supportive of contraception, he vehemently opposed abortion, including in his collection of correspondence All the Best. In a 1989 letter, he noted that, “If there was an issue in the campaign that was clear, it was the abortion question. My opponent strongly supported the ‘choice’ position, and I strongly supported the ‘life’ position. I am not ‘imposing’ my views, because I clearly stated them in running for office, and I am not about to change. I strongly support family planning and have always favored disseminating information on birth control. I do not favor advocating abortion in any way, shape, or form.”

Bush would also release annual Sanctity of Life Proclamations, which he used to promote the pro-life ethic. In his January 11, 1991 Proclamation for National Sanctity of Human Life Day, he noted that: “My Administration has championed compassionate alternatives to abortion, such as helping women in crisis through maternity group homes, encouraging adoption, promoting abstinence education, and passing laws requiring parental notification and waiting periods for minors.” He also enacted legislation that banned NIH funding for the use of fetal tissue, and appointed Justice Clarence Thomas to the Supreme Court—although David Souter would later prove to be an enormous disappointment, just as Reagan’s appointments of Sandra Day O’Connor and Anthony Kennedy would be. It continues to be a singular tragedy that pro-life Republican presidents have appointed the very justices who have upheld the legality of abortion.

Historically speaking, it was the back-to-back pro-life administrations of Ronald Reagan and George H.W. Bush that truly cemented the GOP as a pro-life party as the Democrats veered sharply in the direction of abortion extremism. Activists like Phyllis Schlafly and countless other pro-life heroes worked tirelessly from convention to convention to put pro-life planks in the Republican Party, while meetings like Wilke’s presentation to Bush presented the pro-life position persuasively to those on the fence.

George H.W. Bush was a man of honesty, integrity, and honor. The pro-life movement had the opportunity to witness that first-hand.