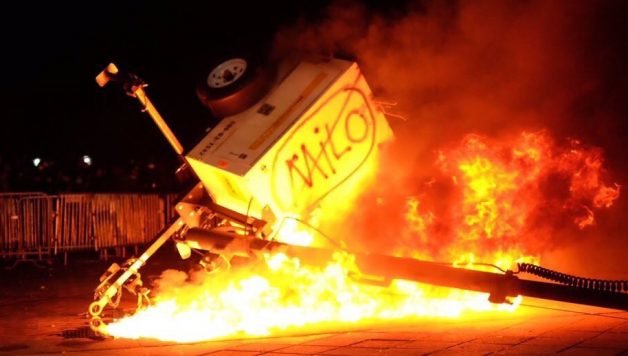 Feb. 9, 2017 (LifeSiteNews) – Last week, I wrote two columns on the escalating clashes in the United States. In the first, I noted that the hysteria that has gripped the Left has reduced their ability to see Donald Trump in political terms, and argued that their insistence on referring to him in hyperbolic terms is hurting democracy. In the second, I highlighted the willingness of the Left to respond to their loss of power with widespread violence and pointed out that despite their accusations of fascism, it is they who are posing a threat to democracy.

In response, some pointed out that the Right has not always been guiltless in the matter of vicious temper tantrums. That, of course, is something I agree with. Bad behavior can be bipartisan. The Hill, for example, posted a blog urging conservatives to remember the backlash that occurred following Obama’s election, listing one violent assault, six examples of grotesquely racist vandalism and graffiti, and one act of arson.

I read through a few other lists detailing this “backlash,” all of them fairly anemic and most of them selecting a few examples that strained credulity (like comments made by grade school children). But granted: there were definitely a few racists who responded in a racist manner when Obama was elected, and took out their frustration with racist graffiti, some racist statements, and – in at least one or two cases – physical violence.

That said, there is really no equivalence between the Left and the Right on the question of violence and lawbreaking. And I can speak from experience. With the Left, violence is not an aberration but an instinctive response.

When I was a pro-life university student, my club members and I expected our displays to be trashed and vandalized. This was completely normal. Signs spray-painted, displays kicked over, placards slashed with knives while people held them—I’ve seen it all, and I’ve seen it consistently.

That is why universities and student unions often demand that pro-lifers pay exorbitant security fees: Because they know that many on the Left are prone to respond with violence to things they disagree with. Pro-life speakers are regularly shouted down, even during organized debates, by protestors willing to scuffle with security, throw things, or blockade doors.

Again, these things are not aberrations. They are par for the course. If I had to make a list of the incidents I have seen happen myself, not to mention those that have happened to friends of mine, I would need the space of several columns. This does not happen to pro-choice events and displays, which need no protection and incur no hefty security fees.

The same is true for conservative or right-wing speakers—and increasingly, any speaker at all that violates the ever-expanding webs of progressive orthodoxy.

Recently, provocateur and incendiary entertainer Milo Yiannopoulos had to be evacuated from UC Berkeley by a security team after an explosion of violence. Many conservative speakers, authors, and politicians now have bodyguards accompany them on campus. The volatility of the Left is so well-known that nearly everyone who disagrees with them has time to prepare by taking precautions for their physical safety.

Again, I’ve seen this myself many times, including one case where a Canadian speaker had to forgo a book signing and get whisked out the back door to avoid an angry mob. Progressive speakers do not need phalanxes of hefty guards, and are not accosted by mobs of angry conservatives.

Then there is the matter of left-wing protests, which almost inevitably involve some element of window-smashing, car-torching, cop-taunting, or physical violence. The Occupy Wall Street movement, for example, was defined by these actions. Political protests often rage out of control—even the protestors at Obama’s 2013 Inauguration were left-wing anarchists. Violent rhetoric is the standard, even at the Women’s March on Washington. Black Lives Matter and other opportunists nearly destroyed Ferguson. When a left-wing faction hosts a protest of some sort, violence bubbles beneath the surface. Police expect it. That’s why they prepare so thoroughly for left-wing protests.

Progressives might point to the alt-right Internet trolls and repulsively racist online commenters as a right-wing equivalent, but that doesn’t quite work. For one, conservatives like myself reject the alt-right out of hand. And while Internet trolls are distasteful, irritating, and often hateful, that is not the same as physical assault or property damage.

The reason the alt-right is so mysterious to so many people is that they seem to exist primarily online, and can’t be found harassing some speaker they don’t like on campus. The same applies to the Left’s favorite bit of evidence that America is a seething, hateful place in need of their totalitarian nanny state: racist graffiti. Again, while disgusting, graffiti is not violence. It is graffiti. Rhetoric is nasty, but is easier to handle than a smashed window or broken nose.

The reason the Left manages to get away with claiming that the Right is violent is that they have redefined what violence is. They now show up at events literally having painted bruises and wounds on their skin to show that the words they are about to voluntarily hear will do them violence. They point to microaggressions, the ever-expanding category of “hate speech,” and “violent rhetoric” as evidence of a real and present danger, even though nearly all of this is fictitious and it certainly does not constitute an actual physical danger.

There are plenty of unpleasant and stupid people on the Internet saying ugly and vile things, but that is not the same thing as having bricks tossed at your speaking event or your pro-life display torn down. And those things happen routinely.

As I said previously, bad behavior is bipartisan, but the Left seems to have an instinct for violence. This makes perfect sense for a worldview with revolutionary underpinnings, and since they have a habit of claiming that violence is all around them, that makes it easy to justify responding with violence of their own. Nobody is threatening their free speech, or tearing down their displays, or forcing their speakers to arrive on campuses with a small army. But yet, they claim oppression due to their inability to control the words and minds of others.

That is why the Left is a threat to both freedom and democracy: Because at the end of the day, they don’t really believe in either.

The curious mind of Milo Yiannopoulos