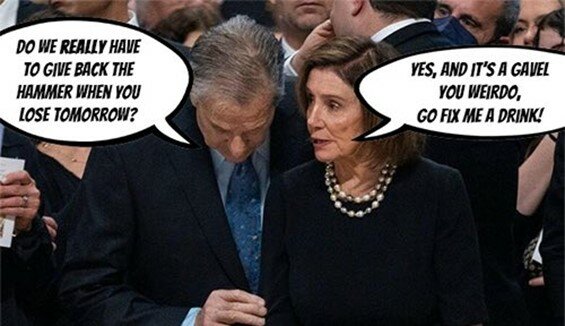 (LifeSiteNews) – It has been 10 days since the world woke up to conflicting reports about Paul Pelosi, husband of the Speaker of the U.S. House of Representatives Nancy Pelosi, being attacked by a hammer-wielding home invader and yet many questions remain unanswered and suspicions, some of which are quite outrageous.

Democratic strategists. politicos, and legacy media journalists immediately sensed an opportunity to turn this into an “October surprise” to be wielded – ironically, like a hammer – against GOP candidates just days before the midterm elections and began spinning a web of partial truths while hiding real evidence. The attacker was at first said to be a crazed MAGA conservative activist. Turns out he was, according to friends and family as well as archival evidence, a crazed run-of-the-mill, dime-a-dozen San Francisco nudist progressive activist.

But the Democrats, their media cheerleaders and their caretakers seem to be getting caught in their own sticky web.

To date, the body cam footage recorded by the police first responding to the incident at the Pelosi’s San Francisco residence has been withheld by law enforcement officials. And the man arrested for attacking Pelosi, David DePape, has been prevented from speaking to reporters.

Exactly one week after the incident, NBC correspondent Miguel Almaguer presented facts that were evidently inconvenient truths contradicting, or at least calling into question, the Democrat-Approved-Narrative. The report disappeared from all of NBC’s platforms.

“In it, Miguel Almaguer alleged police didn’t know what was happening upon arrived & Paul didn’t ‘declare an emergency,’ instead walked toward the suspect, away from police,” noted Curtis Houck, who posted the video.

Here’s the Paul Pelosi report from NBC’s ‘Today’ show that’s been scrubbed from their Twitter & site.

In it, Miguel Almaguer alleged police didn’t know what was happening upon arrived & Paul didn’t “declare an emergency,” instead walked toward the suspect, away from police (1/2) pic.twitter.com/nWUyZdn75x

Tucker Carlson responded to the “Epsteining” of the NBC report:

Now you’ll remember that authorities had previously told us that the intruder, David DePape, had broken into Paul Pelosi’s bedroom on the third floor of the house and woken him up. Yet somehow, both Pelosi and DePape were on the ground floor by the time police got there. Moreover, according to Almaguer, Pelosi and DePape had been together in the house for at least half an hour, and yet strangely, they both seemed fine.

With police present, Almaguer reported Paul Pelosi “did not immediately declare an emergency or leave his home.” Instead, he “walked back several feet toward the assailant and away from police.”

“What? Paul Pelosi walked away from the police and toward David DePape?” Carlson asked. “What could possibly explain behavior like that and what were they doing for the 30 minutes before police arrived?”

“[U]nfortunately for Paul Pelosi, there’s an election coming next week and his wife’s allies immediately politicized the assault against him,” Carlson explained.

Carlson wasn’t the only commentator drawing the public’s attention back to alternatives to the Democrat-Approved-Narrative:

Elon Musk was right. There’s more to the Paul Pelosi story than meets the eye. pic.twitter.com/sNUgyYdUE6

“I’m sorry, [San Francisco District Attorney] Brooke Jenkins, but when politicians, the media, & political pundits are exploiting of the alleged incident to demonize / blame it on half the country, you have a positive obligation to release information that might dispel that political blame game,” tweeted popular YouTuber David Freiheit.

I’m sorry, @BrookeJenkinsSF, but when politicians, the media, & political pundits are exploiting of the alleged incident to demonize / blame it on half the country, you have a positive obligation to release information that might dispel that political blame game. pic.twitter.com/I0l87gbWR9

The New York Times quickly sought to douse the new round of questioning.

“[A]ctivists and media outlets on the right began circulating groundless claims — nearly all of them sinister, and many homophobic — casting doubt on what had happened,” asserted a weekend article headlined “How Republicans Fed a Misinformation Loop About the Pelosi Attack.”

“Some Republican officials quickly joined in, rushing to suggest that the bludgeoning of an octogenarian by a suspect obsessed with right-wing conspiracy theories was something else altogether, dismissing it as an inside job, a lover’s quarrel or worse,” the hit piece continued.

The flood of falsehoods showed how ingrained misinformation has become inside the G.O.P., where the reflexive response of the rank and file — and even a few prominent figures — to anything that might cast a negative light on the right is to deflect with more fictional claims, creating a vicious cycle that muddies facts, shifts blame and minimizes violence.

The three Times journalists who authored the article pointed their fingers at Republicans while failing to mention that President Joe Biden’s dangerous rhetoric about how “MAGA Republicans represent an extremism that threatens the very foundations of our republic,” in front of Philadelphia’s Constitution Hall in September and his more recent declaration that “Democracy is on the line” in this election likely triggered those attacks on GOP candidates across the nation.

The Times accused public personalities such as Elon Musk and Tucker Carlson as having  “abetted the viral spread of lies” and “trafficked in falsehoods.”

Last week, LifeSiteNews reported the Paul Pelosi attack for what it was – a tragic event – and encouraged readers to pray for Mr. Pelosi and his family. But by suppressing available evidence, Democrats and corporate media have only themselves to blame for the wild speculation that persists.