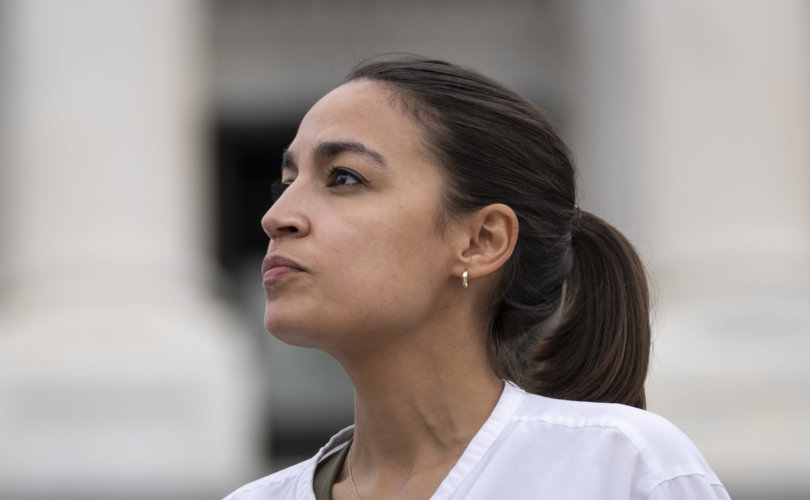 (LifeSiteNews) — In an interview with The Guardian recently, 27-year-old British songwriter Sam Fender noted that in recent years, the term “leftie” has become “a slur in working-class towns.” While he hates the Tories, Fender said, “The left wing have abandoned the working classes, and with a lot of the left — I don’t want to sound like Piers Morgan when I say this — I feel like there is too much nitpicking and stupid fights, especially online … A quarter of the kids in working families in my region are in poverty.”

The Left still likes to talk about the working class, mind you—but it is the elites and the progressives (I repeat myself) who get the real payoff. Union pubs are out; Pride Parades are in.

Perhaps the perfect encapsulation of this was Democratic Congresswoman Alexandria Ocasio-Cortez wearing a white gown with the words “Tax the Rich” scrawled across the back in bloodred letters — to the Met gala, which costs over $30,000 a head to attend. These days, the wealthy are woke, Big Business is fighting the culture wars on behalf of the sexual revolution, and AOC’s rich supporters and fellow Met attendees have their cash stashed safely in offshore accounts. It’s not just a fashion show — its performance art.

It’s a sin to get a crossdresser’s pronouns wrong, but profaning the crucifixion with a pornographic display is award-winning entertainment for the American upper classes. Blasphemy alone isn’t shocking these days, and so the elites have to go to great lengths to profane all that is sacred. The mainstream media, predictably, thought the performance was “the night’s official instant-classic.”

There was plenty of overlap, incidentally, between the attendees of the Met gala and the VMA awards. American elites of every sector cross-pollinate (or, perhaps more accurately, cross-contaminate) and so it is that a socialist can procure a ticket to a gala that costs more than the down payment on most people’s houses wearing a dress that costs more than most people’s cars and party like a Romanov in the Winter Palace.

The MTV Video Music Awards ended, incidentally, with Lil Nas X — the homosexual American rapper infamous for his “Satan shoes” containing a drop of human blood — yelling “Let’s go, gay agenda!” The crowd, predictably, went wild — just as they did for his appearance at the Met gala, shedding various outfits on the red carpet. The elites let their freak flag fly in public, and they do so with corporate sponsors.

As for the poor, the working class, those still “clinging to their guns and religion,” as political celebrity and high society hobnobber President Obama called them? Well, they’ll just have to make do with patronizing platitudes scrawled across AOC’s expensively-clad backside.