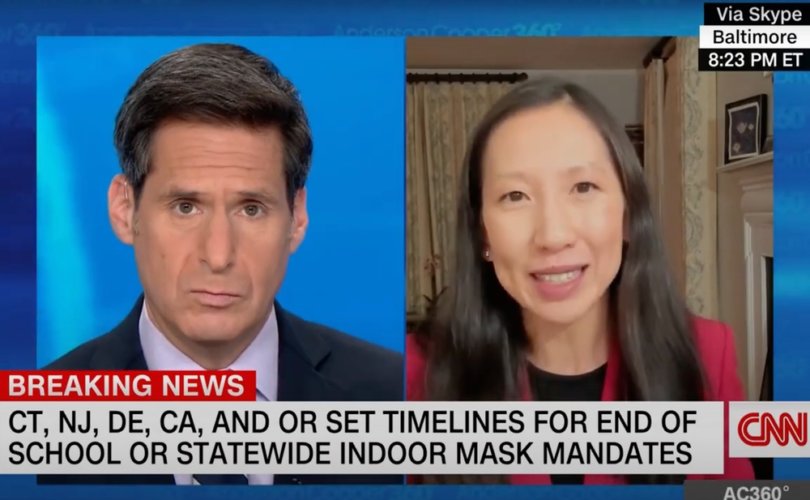 (LifeSiteNews) — CNN health pundit and former Planned Parenthood director Leana Wen made waves this week when she said it was time to lift coercive mask mandates.

“There was, and is, a time and place for pandemic restrictions,” Wen claimed Monday. “But when they were put in, it was always with the understanding that they would be removed as soon as we can. And, in this case, circumstances have changed. Case counts are declining. Also, the science has changed.”

But the only science that’s changed, as many observant social media users and conservative commentators have already pointed out, is the political science.

Along with NIAID head Dr. Anthony Fauci, CDC director Dr. Rochelle Walensky, and all the other ghouls and goblins who haunt the public health establishment, Wen has repeatedly expressed support in the past not just for masking and vaccines but for wielding the potentially life-destroying power of the government and major corporations to force Americans to do their bidding.

Wen herself famously said life should be made difficult for the unvaccinated, urged the Biden administration to impose vaccine mandates for domestic flights (which would probably violate the 14th amendment, but who cares about the Bill of Rights these days?), and spoke out strongly in favor of mask mandates.

Now, Wen says, things are different because case counts are down and the circumstances have changed.

Or is it because poll numbers are down and the politics have changed?

Make no mistake: the data on omicron and masking and vaccines didn’t change. The politics did. Any Democrat pretending otherwise is lying.

As the 2022 midterms rapidly approach, blue state governors have started dropping mask mandates like a bad habit. In lockstep, the public health establishment is now pretending “the science” has suddenly changed and we can now have our freedoms back.

But what’s true about COVID now has always been true.

Despite being pushed by left-wing talking heads and mandated by businesses and governments for two years, masks have never worked, and there are dozens of studies to prove it. The experimental injections have also been a major political and medical disaster, driving wedges between family members, obliterating trust in government institutions, failing to stop transmission of the virus, and contributing to hundreds of thousands of adverse reactions and tens of thousands of deaths. And we don’t even have the long-term data yet.

Lockdowns, too, were also a horrific boondoggle, stripping Americans of their fundamental liberties, shutting down churches, and sending many spiraling into depression, suicide, job loss, and drug addiction while doing nothing to protect the public health.

A new study by Johns Hopkins University has concluded that global lockdowns have had a much more detrimental impact on society than they have produced any benefit, with researchers urging that they “should be rejected as a pandemic policy instrument.”https://t.co/i55MrP1bsF

The results of all the left’s pet COVID solutions have been perfectly predictable. Conservatives have foreseen all of it because it’s just common sense that muzzling yourself, locking yourself in your home, and injecting yourself with experimental drugs to treat a virus that is extremely mild for the vast majority of people is, to put it rather mildly, a little silly.

And the government forcing you to do all of that, meanwhile, is something like petty tyranny.

Now, suddenly it appears the public health bureaucracy agrees with conservatives. Wen isn’t alone in suddenly advocating for a return to normal.

Fauci, that is to say, “The Science™” himself, has suggested there’s light at the end of the tunnel: Mask mandates may soon be merely a weird episode for the history books.

“As we get out of the full-blown pandemic phase of COVID-19, which we are certainly heading out of, these decisions will increasingly be made on a local level rather than centrally decided or mandated. There will also be more people making their own decisions on how they want to deal with the virus,” Fauci said in an interview with the Financial Times.

“I hope we are looking at a time when we have enough people vaccinated and enough people with protection from previous infection that the Covid restrictions will soon be a thing of the past,” he said.

People making their own decisions? People can have protection from previous infections? Dr. Fauci had better be careful. He’s beginning to sound like a fascist insurrectionist spreading deadly misinformation.

Of course, there’s more than enough mealy-mouthed politician jargon in Fauci’s response to let him change his mind if the media can invent a new variant or find some other way to gin up terror about a cold virus again. I don’t want to give him too much credit.

Still, it’s an interesting posture for Fauci and Wen. And it’s not just them.

The Biden administration itself has changed its tune in recent weeks, as steadily nosediving poll numbers have put Biden squarely in the “worst president ever” category.

After promising repeatedly to “shut down the virus,” Biden has admitted what everybody already knew: that the so-called COVID-19 pandemic has “no federal solution.”

With poll numbers in the gutter and trust in the media nearing all-time lows, Biden and the corporate media establishment have now run off and tried to start a war with Russia, hoping to distract us from two years of senseless and oppressive COVID restrictions and mandates plus empty grocery store shelves, soaring gas prices, flailing international relations, and a mind-boggling immigration crisis.

But it’s not working. Distraction tactics, evasion, and doubling down aren’t fooling anyone.

The thousands of Canadian truckers who took to the highways and the streets of Ottawa last week to demand an immediate end to COVID-19 mandates are not alone.

The Freedom Convoy has sparked similar movements here in the United States, as well as New Zealand, Australia, and Europe. And it’s not just truckers.

People around the world have recognized that demanding freedom to make healthcare decisions for yourself and your family is a rational position. Rejecting big government intrusion is perfectly logical. Refusing to participate in a “show-me-your-papers” culture that excludes an entire class of citizens who dissent from government orthodoxy is clearly the right decision. It always has been.

The left wanted to see how far it could push before the people started pushing back, and after two years of “two weeks to slow the spread,” unfortunately, they’ve learned they can push pretty far.

So, as the Canadian truckers demand a return to normal, and freedom-loving people around the world join in a chorus of righteous anger, we must refuse to settle for simply a temporary removal of this or that restriction.

In her comments this week, Wen made clear that the lifting of mask mandates is a political move to attempt to salvage the credibility of the public health establishment so they can impose more mandates in the future. Don’t let them do it.

Their next move is to try to convince you they never advocated for the mandates that have destroyed lives and embittered millions. Don’t let them gaslight you.

The good news is, the cynical political posturing of the left that is leading them to advocate for a return to normal means they’re afraid of the political process. They’re afraid of people making their voices heard, of voting, of taking back political power in whatever ways they can.

This should tell us something important: We have more power than we think. So let’s use that power, and most important, let’s never forget what the left put us through over the longest two weeks of our lives.

Gov. Ron DeSantis, also known as America’s Governor or the leader of the Free State of Florida, perhaps put it best:

“From the onset of the pandemic, corporate media outlets were advocating for lockdowns, school closures, and forced masking of children,” he said. “Two years later? The facts show lockdowns didn’t work, masks didn’t reduce spread, and that Democrats followed politics – not science. Even worse, our school children were used as pawns in their political games. The legacy media will try to whitewash the Left’s failures and hypocrisy. Don’t let them just move on to the next narrative.”

Even worse, our school children were used as pawns in their political games.

The legacy media will try to whitewash the Left’s failures and hypocrisy. Don’t let them just move on to the next narrative.