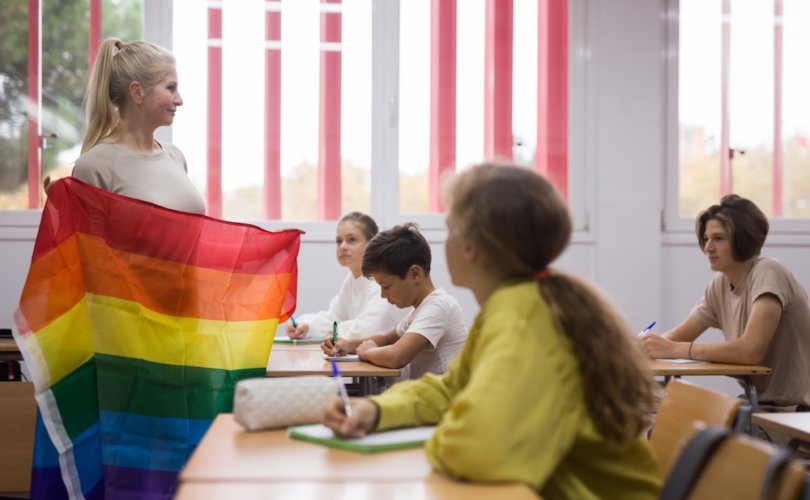 (LifeSiteNews) — Earlier this month, I noted in this space that LGBT activists have so effectively taken over the curriculum of Canadian public schools that students were now being encouraged to choose different gender identities — including fresh new categories such as “non-binary,” which almost nobody had heard of until very recently

Our school system is not simply providing information about new “gender identities” — it is actively encouraging and facilitating children to push boundaries and question their sex.

Indeed, the effectiveness of this indoctrination is creating a massive spike in children identifying as anything but themselves everywhere it has been implemented—even liberal comedian Bill Maher, long-time supporter of the LGBT agenda, noted the trend: “If this spike in trans children is all biological, why is it regional? Either Ohio is shaming them or California is creating them.”

If this spike in trans children is all biological, why is it regional? Either Ohio is shaming them or California is creating them. pic.twitter.com/t3Tx23MOsu

The last few years have seen the trend escalate. A report by The Post Millennial, for example, highlights new data from Seattle Public Schools shows an 853% spike in students identifying as non-binary over only three years. In 2019, 53 out of 55,417 students identified as “non-binary.” In the 2022-2023 school year, that number was up to 505, including three children in preschool, 16 in kindergarten, 89 in grades 1-5, 125 in middle school and 272 in high school.

It is obvious to any reasonable person that a child of four or five years old identifying as “non-binary” has very little to do with the child’s identity, which he or she cannot even conceptualize at that age. A non-binary preschooler or kindergartener is, as one wag put it, a bit like a vegan cat — we all know who is making the decisions here. But despite that, they have been recruited into an industrial-scale social experiment in which confusion is introduced, encouraged, and facilitated. Kids want to be popular and special. The fastest route to achieving that these days is to identify somewhere on the LGBT spectrum.

Two year ago, Politico published an essay explaining how Generation Z (those born after 1996) will change America’s political landscape. This generation is thus far staunchly progressive on a range of issues, but where the future of religious liberty is in doubt is data that indicates “roughly 1 in 4 identify as gay, lesbian, bi-sexual, transgender, or ‘genderqueer.’” That number is mindbogglingly high, especially considering the fact that a few years ago, less that 3% of the population identified as LGBT. To put it bluntly, those stats are hard to believe. But as the Daily Mail noted last year, many teens want to identify as anything but straight: As rates of trans kids skyrocket (a “social contagion,” as Dr. Lisa Littman noted), many students are afraid that they are “dumb and boring” if they do not identify as something other than heterosexual.

Additionally, Politico noted that “a third of Gen Zers say they know someone who uses gender-neutral pronouns to refer to themselves and nearly 6 in 10 say forms or online profiles should allow more options than ‘man’ or ‘woman,’ according to Pew Research Center.”

A more recent survey in the UK by the LGBT group Stonewall, found similar numbers in the United Kingdom, with more than a quarter of Generation Z identifying as LGBT.

As the popularity of identifying as LGBT grows, so will the trends. These numbers are truly stunning, and will have very real political and cultural implications in the coming decades.

Sure, some will grow out of identifying as “non-binary,” and will be able to do so far less painfully than a child who underwent sex change surgeries or took puberty blockers. But the underlying worldview — that I can be whoever I say I am and society is morally (and perhaps legally) obligated to positively affirm my delusions —are here to stay.