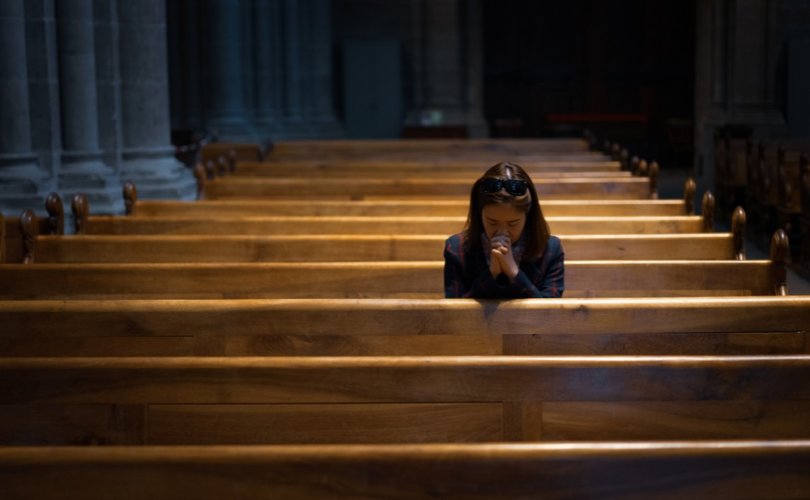 In every aspect, the usus antiquior is like a perpetual exorcism of the devil, pointing over and over again to the incarnate God’s triumph over the ancient enemy of human nature. The very fact that the new liturgy abolished or abbreviated exorcisms wherever they were found — in the rite of baptism, in various blessings, in the very rite of exorcism itself! — speaks volumes.

A lady in Germany wrote to me about this interview, sharing with me her thoughts on Pope Benedict’s speech in Freiburg on September 25, 2011, in which he called for a “deworldification” (Entweltlichung) of the Church. Here is the gist of her very interesting observations.

If the Church is supposed to withdraw from the world — not to abandon it to hell, but to call it forth to its ultimate destiny and lift its vision above the ephemeral — then her liturgy must do the same, pointing us to heavenly realities that abide forever and give meaning to all that passes here below, and relativizing the temporal against the horizons of history and eternity.

This deworldification takes place particularly strongly in the old rite, less so in the new one. The traditional celebration of the Mass emphasizes that the sacrifice of Jesus Christ on the Cross at Golgotha is renewed in a bloodless way. The Lord mystically joins us to His death on the Cross; His boundless love for men irradiates us at the moment when He gives His life as a sacrifice in atonement for our sins. Under the Cross stand the Blessed Mother and the disciple whom Jesus loved. The curtain of the temple is torn in two; the soldiers fall to the ground. Darkness descends over the whole country. The evil forces are thrown into the abyss of hell. As a result, a deep cleansing takes place, an “exorcism” occurs, and this is done in every Holy Mass in which the Holy Sacrifice is offered. The Church is glorified by Christ’s holy love and at the same time freed from evil powers. Her enemies are destroyed. In the celebration of the Sacrifice of the Mass there is always a deworldification in the sense of purification from evil, strengthening in the good, and the promise of immortality.

In the new rite of Mass, however, the celebration of the “Last Supper” is at the center. Here the aspect of fraternal love is renewed; it promotes a peaceful coexistence, the idea of community, and the togetherness of the assembly. Nevertheless, in the Upper Room, Judas is also still present. The Blessed Mother is missing. No enemy is destroyed, not even threatened. Judas goes off by himself, unnoticed, like many who leave the church today. Almost all those gathered approach the Lord’s table to receive Communion, whether they are spiritually in communion or not. Do they assent in full to the Master’s teaching and receive Him as their Lord and God, or are they aligned with the Pharisees and Scribes who are plotting His downfall, with Pontius Pilate who shrugs his shoulders and washes, or tries to wash, his hands of complicity? This rite of Mass, as a liturgical act, does not exorcise the darkness in our souls and magnify the true Light that enlighteneth every man.

To make a comparison to a drama, it does not make any sense why the final act and climax (the sacrifice of Christ on the Cross) is more or less ignored in the play, and instead, the penultimate act (the Lord’s Supper) is performed. The phenomenological suppression of the sacrificial character of the Holy Mass in favor of its meal character is basically a scandal. It can be explained only by the fact that the enemies of the Church knew that they could never eliminate the Holy Mass altogether; they first had to create a weaker form, which becomes ever weaker and at some point is assimilated to mainstream Protestant devotionalism.

That is why Holy Mother Church’s enemies, great and small alike, are against the old Mass. Even churchmen who see that under the new form they are surrounded on all sides by problems for themselves continue to cling to it.

The deepest spring of Pope Benedict’s decision to “liberate” the usus antiquior — that is, the historically continuous Roman rite of Mass handed down by tradition — was not simply reconciliation with the Society of St. Pius X, or friendly relations with scattered groups of traditionalists. As he said in his letter Con Grande Fiducia, it was about reconciling the Church to herself, to her own history and tradition. What he omitted to say, no doubt for reasons of papal diplomacy, is that it was his predecessor Paul VI who did more than any other pope to sever ties with immemorial Catholic heritage in every aspect of the Church’s life. This was no mere “misapplication” of the Second Vatican Council, but a papally endorsed frontal assault on the otherworldliness or supernatural essence and mission of the Church of Christ on earth.

Unfortunately, almost ten years after the speech in Freiburg, we can say Pope Benedict’s message of Entweltlichung or “deworldification” has fallen on deaf ears, both in the lavishly funded bureaucracy of the German episcopate and in the wider Church that continues on its not very merry secularizing way.

Courtesy of Juventutem DC, we have these stunning statistics from Germany. Details have changed somewhat since these plans were originally announced, but the very fact that they were and still are being contemplated gives us an effective “portrait of the New Springtime”:

On the other hand, since the promulgation of Summorum Pontificum in July 2007, the number of (non-SSPX) traditional Latin Mass locations in Germany has increased from 35 to over 150, according to Pro Missa Tridentina. The SSPX, for its part, reports 42 sites, a number that has steadily climbed over the years. There are, after all, shoots of green in this strange springtime. They are precisely where the process of deworldification either has not set in or is conscientiously resisted.