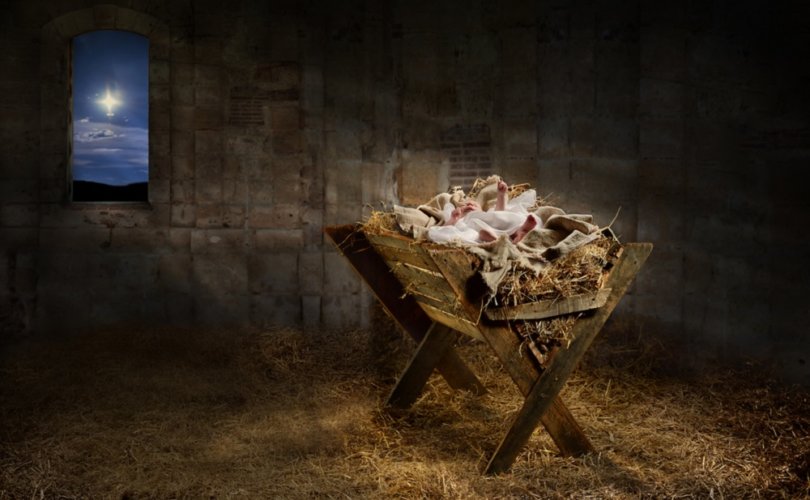 December 24, 2019 (LifeSiteNews) — In Advent, we expect Christ’s coming in several senses. There is an eschatological sense: we expect Christ to come as Judge at the end of time, an expectation key to the Christian life. There is a sacramental sense: we expect the coming of Christ in the Eucharist, where He will be as real as He was in Bethlehem. There is the spiritual sense: we hope and prepare for Christ to come into our hearts. And then there is the most obvious one, which forms the backdrop to the others. The Second Person of the Trinity, Jesus Christ, is to be revealed as a baby.

Christ has been present on Earth since the Annunciation, hidden in the womb of His Mother. That day, 25 March, was for centuries the start of the English financial year; it is also the date JRR Tolkien chose for the final destruction of the Ring in the Lord of the Rings trilogy. It is, in truth, the date of the Incarnation. In His birth, however, Christ is revealed to us: He becomes, as a man, a public person. It is now possible and appropriate for Him to be venerated by the shepherds and the Wise Men. In His birth He becomes subject to the Law of Moses, at least apparently, though really He is the Lord of it: it pleases Him and His Mother to fulfil the Law scrupulously. In His birth He also becomes vulnerable, and He must be carried into safety from the wrath of Herod. We might say that in His birth, the logic of the Incarnation is worked out more fully.

The logic of the Incarnation is that God has a human mother, that He eats and sleeps, that He forms human relationships, of blood, place, and acquaintance, that He can be publicly disgraced, suffer, and die. We might be tempted to say He does and suffers these things only in His human nature, but if He does and suffers them, then God does and suffers them. It is not natures who have mothers, but persons; it is not natures who have friends and relations, who are mocked, tortured, and killed, but persons. The reluctance we might feel to saying that God had a mother, or that God died on the Cross, is understandable, but it must be overcome, if we are to see the full, staggering reality of the Incarnation.

If God became Man, then He had a language of His own, fellow countrymen, customs, and traditions, and all the particularities of place and ancestry. These were not chosen at random. They had been carefully prepared since the time of Abraham: approximately two thousand years of human history had been crafted and shaped by Providence to create a fitting religious and cultural community to give a home to the God-Man. It is tempting to dismiss many or even all aspects of Christ’s culture as an unfortunate distraction from the message, but culture and message cannot so easily be separated. Yes, the Old Testament prophecies were not always correctly understood by Jesus’s contemporaries; yes, there were problems with the way the Pharisees had developed the Law of Moses; and yes, in the end, the religious and political establishment, and the bulk of the Chosen People, did not accept Jesus as the Messiah. Nevertheless, the Old Testament, the worship of God in the Temple, the tradition of kingship and prophecy and priesthood, and the Law of Moses made it possible for Our Lord to set out His teaching, and for His followers to comprehend and accept it, in a way which it would not have been in any other ancient culture. We are the heirs to that culture also, and we must seek to understand it not in order to disentangle Christ’s ‘real message’ from the ‘cultural forms’ in which it was expressed, but in order to grasp the concepts Christ used to express that message, and the cultural references which give it meaning.

The Incarnation is not over, however, and therefore limited to a distant time and place. It is continued in the Church, the Mystical Body of Christ spread throughout the world. As God gradually transformed the culture of the ancient Hebrews to prepare for Christ, so Christ’s presence in the Church has gradually transformed the cultures of Christian peoples. In the season of Christmas we are particularly aware of the cultural artefacts which surround the Mystery of the Incarnation: the crib animals, the Christmas tree, the music of Handel and Bach, not to mention the more modern, popular aspects like Dickens’s Christmas Carol and its many adaptations, and carols of all ages. These aren’t things to be rejected or downplayed in order to get at the ‘real message of Christmas’; they are, some better and some less good, ways of expressing, developing, and meditating upon that message. They may need to be selected and purified, but they are part of the logic of the Incarnation.