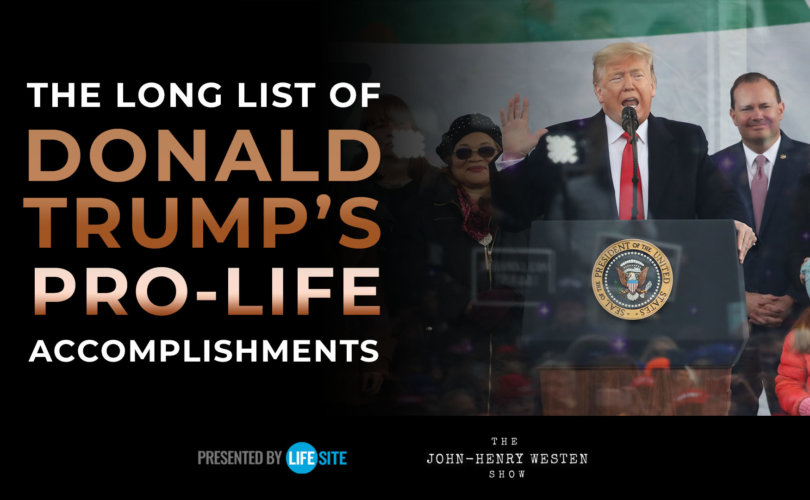 July 28, 2020 (LifeSiteNews) — There are some pro-lifers in America who are steadfastly opposed to President Trump. They suggest that his words and raunchy behavior in the past are too disgusting to get over. They believe that even as president, his trash-talking to his opponents is unpresidential. Some suggest that his immigration policies show him to be racist.

Today on my podcast, I talked about these and plenty of other topics surrounding President Trump with Fr. Frank Pavone, national director of Priests for Life.

Fr. Pavone has come under criticism lately because of his outspoken support for President Trump. He told me today that his message of preaching the Gospel has always been the same and that Trump has simply been doing things that coincide with the Church’s moral teachings.

He also pointed out to me that the Democratic Party is againt the freedom of the Church and her right to religious liberty. It is also uncompromisingly in favor of abortion without restriction. How can the Church be neutral in the face of such opposition to her mission? he asked. “If we didn’t see a party identifying itself with evil, then maybe we could be more neutral.”

Fr. Pavone has published a long list of Trump’s pro-life accomplishments on his website. Read them by clicking here.

I agree with Fr. Pavone. I also think he’s right to highlight the president’s accomplishments for the pro-life cause. The list of things President Trump has done for the unborn is so long that I can’t cover all of it without simply reading a list of one thing after another.

Some of the major milestones President Trump has delivered for pro-lifers are enormous. He is, for example, the first sitting president in the history of the United States to personally attend the March for Life. His speech, which can be viewed here, highlighted just some of the many measures he’s taken to defend the life of unborn children.

President Trump wasn’t exaggerating about his accomplishments in his remarks at the March. He was actually just giving a small glimpse of what he’s done.

For instance, he didn’t only come to the March for Life in 2020. He has addressed the March every single year of his presidency in one way or another. Right off the bat in 2017, he attacked the mainstream media for not covering the March for Life. When NBC asked him about the Women’s March, he responded by calling the network out for ignoring the much larger March for Life.

Trump also sent Vice President Mike Pence and adviser Kellyanne Conway to speak to the March in 2017. No previous president had ever sent such senior representatives to speak at the March. Because of President Trump’s actions, the major television networks covered the March for Life 37 times more in 2017 than in 2016.

In his 2020 live appearance at the March, President Trump concluded his speech by invoking God and clearly identifying himself with the pro-life cause. He also expressed great pride in and gratitude for pro-life activists in America.

Here is a list the Susan B. Anthony List has compiled of Trump’s pro-life accomplishments. Fr. Pavone and I spoke about several of these in our chat today, so be sure to watch it.

And if you think that’s a long list, check out the LifeSite list co-founder Steve Jalsevac compiled in late 2017. It’s amazing.

If that isn’t enough, read these words of Cecile Richards, the former head of Planned Parenthood, the foremost abortion-promoting organization in America and around the world. She said in 2017 that the Trump administration had at that time already done more to set her organization back than any other in the last half-century. She said that during an interview with People Magazine. “This White House has been worse for women than any administration in my lifetime.”

It has to be admitted that Donald Trump was, during his life before becoming president, a very foul-mouthed man whose actions seemed to go along with his words. Of course, he’s apologized for much of what he’s said, but let me tell you — especially for converts and reverts to the faith like me — to judge someone on their past as if people can’t change is truly unjust.

My past is full of sin, and as I’ve said before and will say again, I was deservedly going to hell before my coming back to Christ. Fr. Pavone has likewise said it’s better to think about what President Trump has done and what his judicial nominees are going to do for us in 20 and 30 years instead of focusing on things the president did 20 or 30 years in the past. This election is about the rule of law and the future of America versus mob rule and chaos, he added.

I do for a second want to address some of the criticisms of President Trump during his time in office. He does indeed use pejorative language and ad hominem attacks, and it can sometimes be said that he seems rather “unpresidential.”

But my question is, in this day and age, can he be anything else? The culture of America and indeed most of the world today is so toxic, so laden with all things uncivilized, that it seems almost impossible to survive and thrive without resorting to “unpresidential” tactics.

To me, he is the first conservative to respond to the left with the same ugly language they use to disparage him and all of their opponents. As a former liberal himself, he knows the lingo and gives back what he gets with a flair and gusto that are at least amusing. While it may be impolite and definitely improper in civilized society, we are no longer civilized!

He also does not take insults and attacks lying down; he punches back with a quick wit that has baffled his opponents.

You could say he’s not fit for office, but the presidency has been so demoralized with the likes of Bill Clinton and Barack Obama that such a statement has little relevance to America and the Western world anymore. Indeed, most world leaders today support the killing of innocent children in their mothers’ wombs. How is it possible to even speak about someone being “unpresidential” when these morally bankrupt people support such a terrible crime?

Yes, Trump built a wall, and he insists on a vetting process for those wishing to immigrate to the U.S. However, a reality check is needed. He has welcomed and encouraged legal immigrants, and his policies for immigrating to the USA are a lot less stringent than those for immigrants to Mexico. Moreover, one of Trump’s biggest critics on building the wall — Pope Francis — should remember that the pope’s own Vatican City State is surrounded by a wall much higher than the one the president built along the southern border.