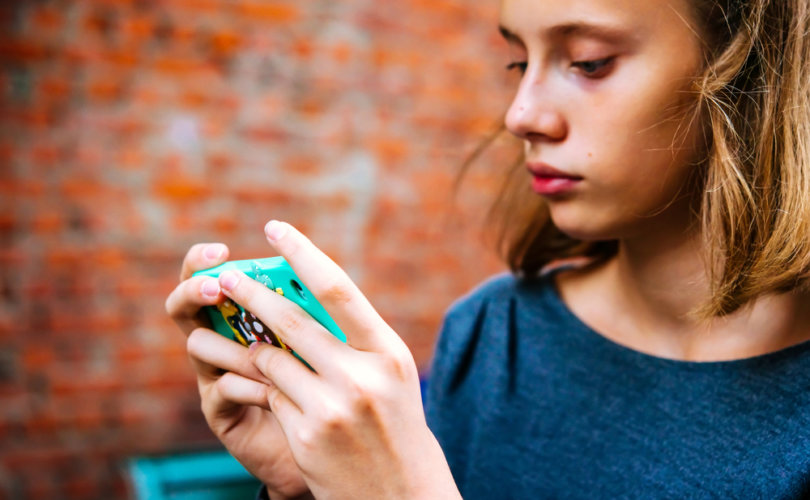 Oct. 4, 2016 (LifeSiteNews) – After spending four days at the Coalition to End Sexual Exploitation Summit in Houston, Texas, my brain is very tired. We heard lectures on neuroscience, human trafficking, sexual abuse, child exploitation, and so much more. And we heard many, many lectures on the poison that is seeping in everywhere, fueling sexual abuse, destroying relationships, breaking down the ability of men to function, and obliterating childhood: pornography.

I’ll be writing a lot more about what I’ve learned (read my reports from the conference here, here, and here) but for now I’d like to make one simple plea to parents, something nearly every speaker and every lecturer advised: don’t give your children smartphones.

This advice has made me very unpopular in some circles—one teenager greeted me at a high school presentation by saying balefully, “So you’re the one who told my parents I shouldn’t have a cellphone.” But it is essential. Children, and most teenagers, do not need a phone with Internet access.

It’s crazy to think that a decade ago, smartphones were uncommon. Many people didn’t even own a cell phone. Now, as we heard from Vanity Fair journalist and author of American Girls: Social Media and the Secret Lives of Teenagers Nancy Jo Sales, nearly every social interaction – and sexual interaction – of teenagers is shaped by the tiny, always-throbbing devices they carry with them wherever they go. This has given rise to cyber-bullying and a spate of suicides, sexting and sexual exploitation of teens by teens, and the nearly non-stop viewing and amateur production of pornography. Teenagers – and children – are pulled into the social webs woven from Facebook to Instagram, from Snapchat to a half-dozen other underground cyber-settings, the interactions and content curated only by the children who populate them, free of parental or adult supervision.

Teenagers know that it’s making their lives miserable. The girls Sales talked to told her so. They also said that they had no way of getting out. Much of life is now lived online, and to opt out is to engage in voluntary isolation. The currency is often nude or sexually explicit pictures or “selfies”—and increasingly, that’s often non-optional, too.

Parents cannot control the new world of teenagers. In many cases, they cannot even penetrate it. That is why one man was so bewildered when his daughter hung herself after a teenager cruelly posted a video of her in the shower on Snapchat—that was the first time the girl’s bereaved father had ever even heard of Snapchat. For parents who wish to rescue their children from the cyber-jungle or spare them the pain that is engulfing millions, there are a number of answers. Open communication and open conversations. Attempted oversight of social media use. Accountability software and filters on all technological devices.

But for today, I just want to push one: Don’t give your children smartphones.

This advice has made me very unpopular in some circles—one teenager greeted me at a high school presentation by saying balefully, “So you’re the one who told my parents I shouldn’t have a cellphone.” But it is essential. Children, and most teenagers, do not need a phone with Internet access. They do not need nonstop access to social media sites that put them under the influence of their peers rather than adults. They do not need the social pressure that inevitably – inevitably – comes with entering a cyber-world of teenagers with new standards and new currency. And above all, they should not have access to all the pornography the web can offer, vile material that is setting new sexual standards teenagers across North America and beyond are beginning to conform to, through pressure, through force, or by choice.

Don’t give your children smartphones.

I understand that teenagers are more likely to actually need a cell phone. My parents signed for a cell phone for me when I got my driver’s license—not so I could interact with my friends or go online, but so they could contact me and I had a way of communicating with people when I was out and about. My first cell phones had no Internet capability, and I didn’t miss it. I sometimes wish my current phone didn’t have Internet either, because I’m as guilty as the rest of this generation of wasting time on my phone when I could be doing something – or anything, really – more productive. But when teenagers need a phone, they still don’t need a phone with Internet access. A phone that allows them to make phone calls and text is good enough. They don’t need nonstop social media connection, they don’t need SnapChat (a “sexting” app that destroys photos in seconds), and they absolutely should not have access to the twisted pornography that they will almost inevitably find.

Don’t give them one.