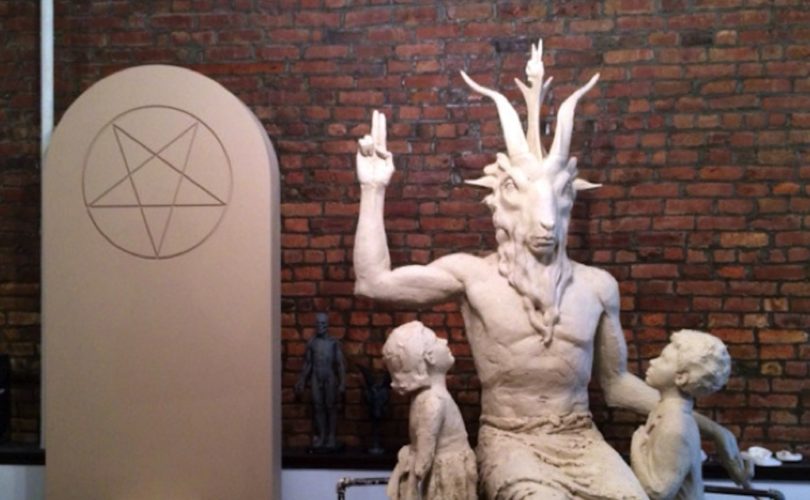 The media have been abuzz for the past 24 hours with a report that The Satanic Temple is demanding that women be excused from mandatory pre-abortion counseling on the grounds that it violates the religious teachings of Satanism. Indeed, there has been so much reporting that you may be tricked into believing it is news.

But the story is old hat to readers of LifeSiteNews. We reported the group’s decision more than six weeks ago.

The national spokesman of The Satanic Temple, “Lucien Greaves” (who was apparently born Doug Mesner), announced more than a month ago that abortion restrictions violate Satanic beliefs, and that same-sex “marriage” is a Satanic sacrament. “We [members of the demonic cult] feel we should protect women from superfluous procedures like the transvaginal ultrasound, with [a] religious exemption,” Greaves told a local media outlet at the time.

I brought this story to national attention in a piece on LifeSiteNews June 10. In fact, I did an entire radio segment on it on “As the Spirit Leads” Catholic radio program, based in Philadelphia. (And, ahem, you can contact me for other radio gigs.) A few other outlets have picked up the story since then.

Then the story made its way into the mainstream media in the usual way: A liberal group sent out a press release, a reporter barely rearranged its contents, and – voila! – journalism.

The Satanic Temple finally went through with its threat to lampoon religious objections. A letter (pdf) posted on its website yesterday states that the demon-worshiping body is “asserting a religious exemption from the burden of state-mandated ‘informational’ abortion materials for those who share their deeply held beliefs.”

The group says that warnings contained in such materials – e.g., that women suffer from post-abortion psychological trauma, and information linking abortion to an increased risk of breast cancer – are “'scientifically unfounded’ and ‘medically inaccurate’” and are therefore an affront to Satanic religious beliefs. The group has drawn up a letter that women may print and hand to their abortionist, telling him, “I trust that you will … keep me fully and accurately informed of my health based on science, not politics.”

Most reporters have likened this purported “religious objection” to the one Hobby Lobby successfully cited to opt out of the HHS mandate. Like most MSM reporting, that does a disservice to religion. The owners of Hobby Lobby place their faith in Jesus Christ at the center of all their decisions. The founders of The Satanic Temple do not actually believe in Satan at all.

“While the original thinking was that the Satanic Temple needed to hold to some belief in a supernatural entity known as ‘Satan,’ none of us truly believed that,” Mesner/Greaves told Vice.com. Thus, they have no religious beliefs to violate. He has been open about the fact that he and his largely unpublicized circle of followers intended the group to satirize those mostly evangelical and orthodox Catholic people who exert their First Amendment rights.

To that end, the inveterate publicity hounds have milked the media for every ounce of fame they could wring out of them. They defiled the grave of Fred Phelps’ mother, attempted to host a Black Mass at Harvard, and petitioned to erect a statue of Satan at the state capitol building in Oklahoma. Indeed, they have collected an untold sum of donations to build this yet-to-be-produced sculpture of the dark one, proving P.T. Barnum’s assertion about intelligence and obstetrics.

Expect more in the future. The Satanic Temple says this is “the first campaign in a series of Women’s Health [sic] initiatives the Satanic Temple intend [sic] to make public in the near future.” (Any actual religious group that so mangled the English language would have seen its errors highlighted in media coverage.)

The mainstream media love Mesner, et. al., for two reasons. Reporting the jokesters’ actions allows the media elite to attack the nation’s moral, faithful majority via proxy. And it lets them pretend they are covering news in a timely manner, reinforcing their delusion that they are actually journalists.

To read what the mainstream media will report tomorrow – and what it is covering up today – keep reading LifeSiteNews.