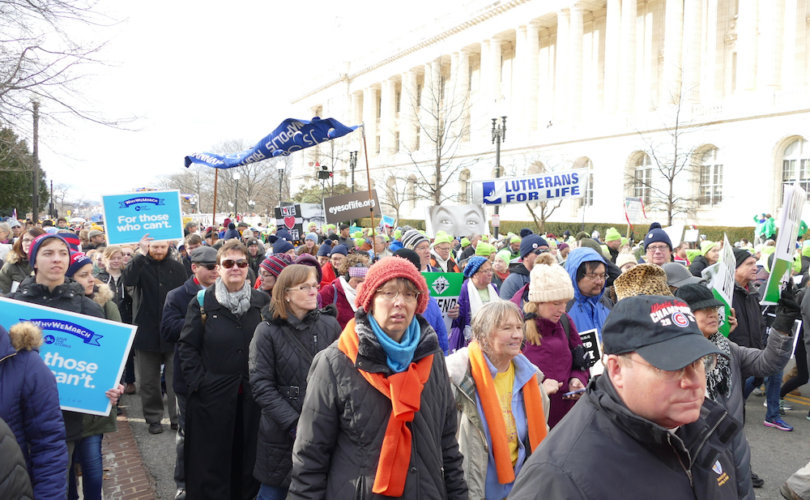 WASHINGTON, D.C., January 31, 2017 (LifeSiteNews) — With the tightest security ever at the March for Life, the schedule for screening was pushed ahead and I missed getting into the press tent before the rally.

Security split up the more than half a million pro-lifers, and I was with a group of tens of thousands fenced away from the main rally, where the sound of cheers could be heard literally blocks away over the busy nation's capital traffic.

Wanting to make myself useful, after Vice President Mike Pence said, “God bless you, and God bless America!” to thunderous applause, I shuffled, slid, and squirmed my way through several blocks of solid people to the front of the March at 14th and Constitution.

I figured I'd video the entire March as a way to more accurately measure the size of the crowd.

I perched atop a huge planter, about five feet above the sidewalk, and started filming.

With the rally still going on in the distance, tens of thousands of marchers began their trek to the Supreme Court. I was surprised to see them start, with the cheers from the rally still clearly heard. From the east on 14th Street, groups of hundreds of people merged with the thousands from Constitution Avenue, and the March Before The March was underway.

Still stunned that so many began before the official beginning, after a few thousand passed by I decided to video the “pre-march march” going on in front of me.

It was a slow-moving crowd. I've been to the March for Life since the early 1980s and this was by far the densest mass of humanity I'd ever seen. Usually the March is very well attended — averaging a quarter of a million marchers over 44 years — but usually there is enough space on the super-wide Constitution Avenue that folks can walk freely, and the crowd moves along briskly at a fairly decent clip.

Not so on Friday. Marchers walked very slowly — often forced to a complete and sustained standstill — because the mass of people was so thick.

The sea of people continued for more than 45 minutes. I got most of it on video. At one point, I asked a fellow photographer, “Do you know what's going on?”

“Well, I never saw the front March for Life banner, I never heard an official beginning, just people started, while the rally was still going on.”

Signs included “Be Strong: I will never leave you,” “Life Trumps Death,” “Every living thing wants to live,” “Giving murder a nice name like 'choice' doesn't make it okay,” “Babies are not disposable,” “No law can give me the right to do what is wrong,” “Babies can feel joy while in the womb,” “We march to preserve families,” “Trump Loves Unborn,” “We march because abortion stops one heart and breaks another,” “A nation's greatness is measured by how it treats its weakest members,” “We march for those who can't,” and many more.

Thinking the march was over, I noted that the crowd began to thin a bit. Then I heard shouting and cheers from a huge group way behind the march I had been videoing for 45 minutes.

The distant crowd grew louder, and I decided to check this second crowd out. I met up with a fellow journalist and asked, “What is this group? The march is long gone.”

“This IS the March,” she informed me. An even larger mass of pro-lifers than I saw march past me was now ready to begin.

Then I saw the familiar March for Life banner to begin the official March. In other words, though perhaps more than a hundred thousand people had already marched, the vast majority of the pro-lifers had not begun yet.

A few notes about what I observed as a wave of humanity continuously and relentlessly passed by my perch:

While there was significant police presence, they were smiling and joking in self-enclosed circles, almost oblivious to the hundreds of thousands of marchers a few feet away. I even heard one cop tease another with a joke about the proper way of putting up a barricade. It seemed clear to me that they didn’t believe they would have any trouble from pro-lifers — unlike the so-called “Women's March” the previous week, and completely unlike the Inauguration, where protesters destroyed shop walls and smashed huge windows, violently screaming hatred against newly sworn-in President Trump.

Significantly, it was obvious that the police were acting casually, knowing there was absolutely no danger. These were the same people than under the Obama administration were defined as potential terrorists and one of the greatest threats to domestic security. Not a hint of anything like that Friday.

The largest March for Life was in 2013, after Barack Obama was re-elected to the White House, with an estimated 650,000 activists. I'm no expert, but I certainly think this one beat it.