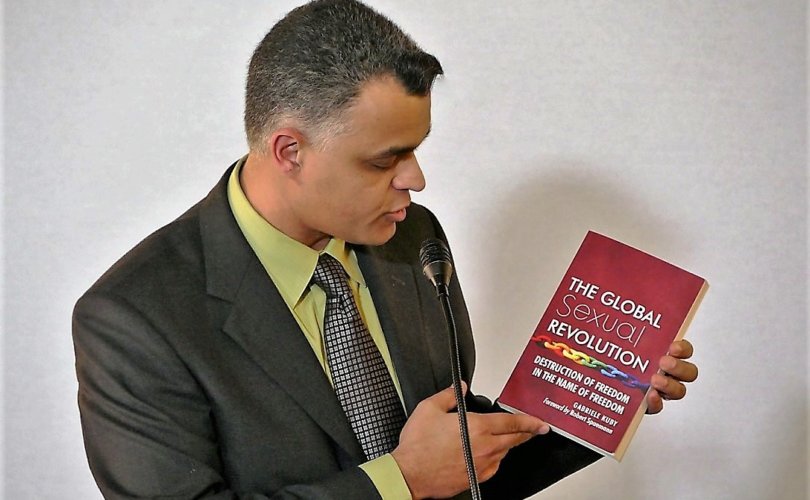 May 27, 2016 (LifeSiteNews) — Under the guise of fighting homophobia, sex education, freedom of choice, LGBT rights, and non-discrimination we are experiencing the imposition of an ideology that is asserted all over the world with religious fervor. Unlike the Christian faith however, this set of beliefs is imposed rather than proposed. It employs the education system, national legislation, attacks on religion and the Church in an effort to achieve total adherence, forbidding dissent.

Across North America and Western Europe for the last 20 years we’ve seen bakers, wedding photographers, florists, professors, counselors, health care workers, media personalities, professional sports players, bed and breakfast owners, mayors, printers, politicians, foster parents, fire chiefs, magistrates and police fined and some lose their jobs for failing to adhere to the new dogmas of the religion which paints itself as neutral and objective — the arbiter of the acceptability of various expressions of the multiplicity of world religions.

In the movement for life and family we have long seen international economic pressure used on developing nations to force them into compliance with the new dogmas of false freedom, gender ideology and a warped conception of human rights.  The United Nations, Europe and North America have conditioned aid money to poor countries on the acceptance of contraception, abortion and homosexuality. According to Bishop Badejo of Nigeria, even help with fighting Boko Haram was impeded by the nation’s refusal to accept homosexual ‘marriage’.

Of late however we have seen use of these same economic pressure tactics on a national level.  In the United States, large corporations have effectively usurped democracy by strong-arming elected officials into betraying the people they represent with the threat of financial ruin.

It was foretold by a homosexual activist financier in March of 2015.  Tim Sweeney spoke of defeating religious freedom exemptions in the U.S. within three years. “We are at a crossroads where the choices we make will mean we will fight religious exemptions for two to three years or have a protracted twenty year struggle on our hands,” Sweeney told leading business executives and others attending the Out & Equal Workplace Advocates executive forum, held in San Francisco.

Last month, executives at more than eighty companies—including Apple, Pfizer, Microsoft, and Marriott—signed a public letter to the governor of North Carolina urging him to repeal the state’s new law (protecting religious freedom). Lionsgate Studio is moving production of a new sitcom out of the state, Deutsche Bank cancelled plans to create new jobs there, and PayPal has cancelled plans for a global operations center. In Mississippi, G.E., Pepsi, Dow, and others attacked the law there as “bad for our employees and bad for business.” Disney said that it would stop making movies in Georgia, which has become a major venue for film production, if the governor signed the bill. Something similar happened last year in Indiana, after the state passed a religious-freedom law allowing businesses to discriminate against L.G.B.T. customers and employees. At least a dozen business conventions relocated.

A little corporate muscle flexing can work wonders, it turns out. Last month, Georgia’s governor vetoed its religious-freedom bill, implicitly acknowledging that the state could not afford to lose Disney’s business, and South Dakota’s governor, citing opposition from Citigroup and Wells Fargo, vetoed a law that would have required people to use the bathroom that corresponded to their biological sex at birth. Last year, Indiana and Arkansas amended their religious-freedom bills after a corporate backlash (led, in Arkansas, by Walmart).

We have seen the financial coercion go from the international level to the national. As I mentioned earlier we have also begun to see it affect certain individuals. I would suggest it will not be too long before that pressure is applied to each individual.

Such a development was predicted over 2000 years ago in the Apocalypse or the book of Revelations.  In the 13th and 14th chapters of the Apocalypse we read about the so-called “mark of the beast.”

16 And he shall make all, both little and great, rich and poor, freemen and bondmen, to have a character in their right hand, or on their foreheads. 17 And that no man might buy or sell, but he that hath the character, or the name of the beast, or the number of his name.

9 And the third angel followed them, saying with a loud voice: If any man shall adore the beast and his image, and receive his character in his forehead, or in his hand; 10 He also shall drink of the wine of the wrath of God, which is mingled with pure wine in the cup of his wrath, and shall be tormented with fire and brimstone in the sight of the holy angels, and in the sight of the Lamb. 11 And the smoke of their torments shall ascend up for ever and ever: neither have they rest day nor night, who have adored the beast, and his image, and whoever receiveth the character of his name.

Having some mark which allows buying and selling is not evil in and of itself, thus there must be something attached to getting the mark which makes receiving it worthy of eternal damnation.  It would follow logically that in order to have the means to buy and sell people could perhaps be required to be upstanding citizens.  Might not they be expected to sign on to some statement of human right to attest to such a state?

For over 20 years the ideologues of the new global religion have worked to insert language into United Nations human rights documents that would support the new ideology.  They have had partial success and with every new UN conference comes new incursions.

The purveyors of the new religion have achieved a level of global saturation in the developed world which seems ready to demand from each and every citizen adherence to their dogmas. With false love and false mercy a universal salvation is promised to all those who ‘lovingly accept others’ sexual lifestyles without discrimination and bigotry.

Many have wondered how, when persons with homosexual tendencies form such a small minority of the population, they can have acceptance of their deviant sexual lifestyle made a universal requirement.

With most of the world engaged in aberrant sexual behaviour such as the use of pornography or contraception, the link to protecting the sexual aberration of homosexuality becomes clear.  One cannot allow for the condemnation of one sexual perversion when he is himself engaged in another, rather all should be protected and accepted.

The coming years will see an increase in persecution I’ve described thus far.  There is an increasing hatred for those who dare to dissent from the dogmas of the new religion coming from the general public which has been taught that most of the world’s problems are due to those unwilling to embrace love and tolerance.

It is instructive to remember the passage from chapter 11 of the Apocalypse where the two end-time prophets are finally slain by anti-Christ.  The Scriptures note that their bodies shall lie in the streets for three days and all shall rejoice and exchange gifts “because these two prophets tormented them that dwelt upon the earth.”

In what way did they torment those on earth? By giving voice to their consciences.

In the end there remains hope along with faith and charity. Cardinal Caffara was sent a letter by Sister Lucia of Fatima who wrote him saying “the final battle between the Lord and the reign of Satan will be about marriage and the family.”  She added: “Don’t be afraid, because anyone who works for the sanctity of marriage and the family will always be fought and opposed in every way, because this is the decisive issue. And then she concluded: however, Our Lady has already crushed its head.”

The battle is the Lord’s and He has already won. We are on the winning team, despite what the situation may look like. Ours is but to do our best to carry out the will of the God in our lives and accept even with thanks all the circumstances He sends our way.

Just as the Passion brings us Easter, the tougher the times the greater good God will bring from them. He never gives us more than we can bear and all things work for good for those who love Him.