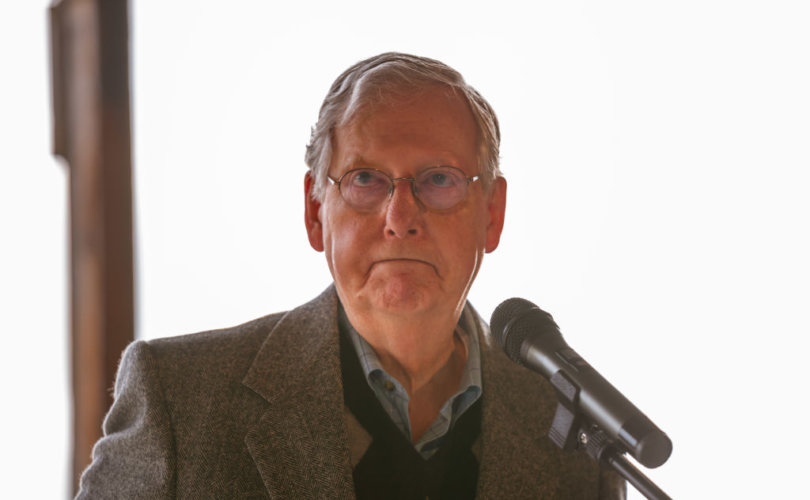 November 5, 2020 (LifeSiteNews) — The corporate news media are currently waging a coup against President Donald Trump. And it’s not just the mainstream press that’s in on it. It’s the Democratic and Republican establishments that want him out as well.

I was scrolling through likely 2024 presidential candidate Nikki Haley’s Twitter feed last night. Not once did she express support for President Trump as he endured round after round of social media censorship while fighting back the media’s attempt to declare him the loser in this year’s race.

Instead, Haley was busy posting dozens of smiling photos of herself with various Congressional candidates. Not a peep about how the media was scuttling the president’s re-election bid.

Senate Majority Leader Mitch McConnell (R) has likewise not pushed back against the unaccountable media’s decision to award as fast as possible states for Biden that have no legitimate reason to be declared for him.

In fact, hardly any Republican lawmakers have put up much of a fight in response to the press’s attempt to steal the election from the president.

The simple fact is that President Trump has been left for dead by the GOP. He, like President John F. Kennedy when the Secret Service detail backed off his motorcade in Dealey Plaza, is now a sitting duck. His one-time allies in the GOP and at Fox News (which has proven itself to be a major traitor) have decided to sit this one out. He alone will have to fight for his re-election.

In Wisconsin, there’s an alleged 90% voter turnout — a near-statistical impossibility that absolutely needs to be investigated and closely recounted.

In Michigan, an overnight magical discovery of hundreds of thousands of mail-in ballots have catapulted Biden far ahead of Trump, who was previously comfortably in the lead.

Many media outlets also called Arizona for the former vice president early in the race despite there being north of 500,0000 ballots still outstanding. Some news organizations, thank God, have not been that foolish and are awaiting more results to come in. We should know more today.

Finally, Alaska and its whopping 3 Electoral College votes are not being awarded to Trump despite him having a commanding margin there. Talk about pouring salt in the wound!

The media’s goal all along has been to inch Biden as close to 270 Electoral College votes as they can and to keep Trump’s total as low as possible. They’ve done this for two reasons.

One, they want to give the Biden campaign a sense of legitimacy, a sense of inevitability that preps the psyche of the American people to accept his eventual presidency should they decide to give it to him whenever they feel like it.

Second, by pumping up Sleepy Joe’s Electoral Votes, the press makes Trump look weak and unpopular. Should he ever make the enormous comeback that he now needs, the American people will be led to believe he did it with nefarious methods, thereby casting doubt on his second term.

Ultimately, the media want to declare Joe Biden the victor of the 2020 race as quickly as possible so they can box Trump into a corner he can’t get out of. They want to put in front of the American people on their television screens the term, “President-Elect Joe Biden,” ASAP.

If the media succeeds in doing this, they’ll be making it darn near impossible for President Trump to take back the momentum he had on election night.

But President Trump is, if nothing else, a fighter. He realizes the absurd votes that poured in overnight in Michigan are likely fraudulent. He sees that the ridiculous turnout rate in Wisconsin is utter nonsense. He has rightly called this sinister assault — conducted under the cover of night, mind you — as an attack on the American people.

President Trump was absolutely correct to declare victory in Pennsylvania, Georgia, and North Carolina yesterday. The media weren’t ever going to give him those states. It was the only way he could fight back.

By every impartial measure, he now stands at 268 Electoral College votes. And yet, when he repeated that simple fact on Twitter on Wednesday, he was immediately censored.

All of this is a sure sign of things to come should Joe Biden become president. Big Tech is done with Donald Trump and with conservative voices like ours. They’re no longer hiding their true colors. As far as I can tell, they’re in on the coup attempt being waged against our president, a coup carried out not only by the Deep State and the Democratic Party, but, sadly enough, by the Republican establishment as well. These people are not our friends.

Pray for our president like never before. He is, in many ways, fighting a one-man battle against legions of diabolical forces that want to destroy not only our country but you and me too.