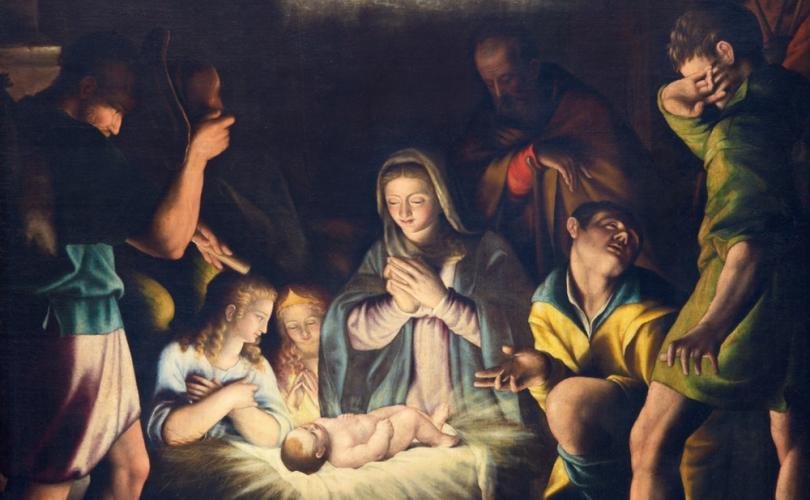 (LifeSiteNews) – What an Advent! As I write these words, Christmas is drawing near and bad news seems to be piling up on every front. On Friday, France’s Prime minister announced that a vaccine pass will replace the present sanitary pass required for a large number of activities as soon as a new law is adopted in January. Less than 24 hours later, a document from Rome hit us on the head: severe restrictions have been placed on the traditional Roman rite, with the avowed purpose of banning it altogether. We are worse than lepers, we are being turned into sanitary and liturgical outcasts.

And yet our family is preparing for Christmas, as if nothing were wrong: Midnight Mass in the traditional rite, and a warm family celebration with decorations, festive meals and presents.

Our simple joy, echoed in so many faithful Catholic households, is true and good. Right now, it is probably the best answer to their lies, their loathing, their cruel scheming that is none other than a concomitant attack against God’s sacred inheritance: our identity as human beings created in His image, and our duty and right to worship Him according to the age-old tradition of the one Church He willed as the only means for salvation.

Our minds and hearts turn to the Blessed Virgin, how could they not? She was also waiting for Christmas… ever since her Immaculate Conception.

In her times there was only a remnant of the royal family of David, and Joachim, her father, the last prince directly descending from the great king, and Anne, her mother, of the lineage of the chiefs of the priests of Juda and last descendant of Aaron, were too old to conceive. But nothing is impossible to God! In Aramaic, the name of their daughter, “Mariam,” means: “the little princess.”

Was it because they were too elderly that they presented their three year-old daughter to the Temple to be brought up there? Or was she already orphaned at that tender age, when tradition tells us that she who is the true Temple that would receive the Son of God in her womb, was entrusted there to the care of the widow Anna?

For eleven years, Mary was educated at the Temple, learning to spin, to weave and embroider with the group of virgins who prayed especially for the coming of the Messiah, and had the task of making the sumptuous priestly vestments that served for the glorification of God. She also received a profound religious formation, already keeping the Word of God in her Immaculate Heart before truly and physically becoming the Mother of the Word of God.

Joseph was also of Davidic lineage, as the Gospel teaches in the Genealogy of Our Lord, giving his adoptive son the legal right to become King of the Jews. Our Lord would be born into a royal family, even though Mary and Joseph had no riches nor power, and lived simply by the work of their hands.

Was this the darkest time of Israel, with time running out as the descendants of David dwindled and as both Mary and Joseph, as future spouses but also legitimate heirs, had vowed to remain virgins in the name of God, seemingly shutting the door to the birth of the Christ? But nothing is impossible to God!

We join Mary in thought as she hastened towards the mountains to see her cousin Elizabeth, bringing her not only help but her Lord.

As Mary travelled along the road, having set forth immediately after the Annunciation, she composed a lullaby to sing to the Son so tiny in her womb, as was the custom for pregnant women in her times. Her “Magnificat” is a pure masterpiece, an intricate literary jewel woven together from echoes of the Scriptures. It is a proof of the intimate knowledge she had of the history of the chosen people, and of the prophecies and mercies of God, and the humble proclamation that all generations would call her blessed.

Surely, in our dark times, the “Magnificat” is our hope and our consolation! “He hath shewed might in His arm: He hath scattered the proud in the conceit of their heart. He hath put down the mighty from their seat, and hath exalted the humble.”

As Christmas neared, and as Christmas came, as angels, men and women proclaimed the royalty and the divinity of the boy-child Jesus, Mary knew who she was, and what awaited her. She was ready for the hostility of Herod that would oblige the Holy Family to flee to Egypt; she was ready to live hidden in Nazareth for the protection of her Son; she was ready for the Cross and for His cry of victory at the end of His Passion: “All is accomplished.” Nothing is impossible to God!

This is as true now as it was then. We have not the promise of ease and comfort and peace and freedom and justice here below, although they are often given to us without merit on our part, but we know that true, eternal victory is already ours, through Jesus-Christ. We are never stronger than when we kneel before Him, never happier than in front of the manger where the most beautiful and good of all the daughters of Eve placed her newborn and her God. When she embraces him, she embraces us. We are safe.

The message of Christmas is ever one of hope, sure hope, hope that cannot be destroyed whatever happens, the hope of a victory already obtained. Dear readers, I can truly wish you a blessed and happy Christmas, safe in Mary’s arms.

Because whatever happens, our deliverance is at hand. Because nothing is impossible to God.

• These reflections were inspired by Marie, Mère de Mémoire (“Mary, Mother of Memory”), éditions du Jubilé 2019, by Pierre Perrier, a specialist of the oral structure of the Gospel in Aramaic.