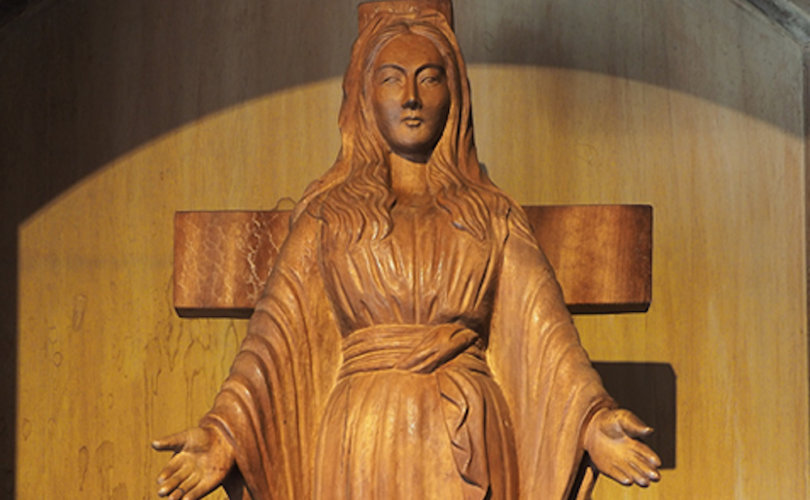 (LifeSiteNews) — As Western neoconservatives continue to recklessly hurl the world toward nuclear war with Russia, warnings from approved apparitions of the Blessed Virgin Mary in Akita, Japan, provide a foreboding warning.

The convent of the Handmaids of the Holy Eucharist in Akita became the site of multiple supernatural events following the arrival of an incurably deaf novice named Sr. Agnes Katsuko Sasagawa in 1973.

A month following her entrance in May, reports of visions of “brilliant light” emanating from the tabernacle along with a type of smoke in the sanctuary and even “a multitude of beings similar to Angels who surrounded the altar in adoration” were reported and observed by even the local bishop and others.

Later, many hundreds of people witnessed a now famous statue of the Blessed Virgin Mary weeping on 101 occasions between 1975 and 1981.

But Sr. Agnes also received visions and direct communications from her Guardian Angel and the Blessed Virgin, some containing dire warnings and an urging for her and all to prayer and acts of penance.

On August 3, 1973, Sr. Agnes received the following message from the Blessed Virgin Mary while praying in the convent chapel:

Many men in this world afflict the Lord … In order that the world might know His anger, the Heavenly Father is preparing to inflict a great chastisement on all mankind … I have prevented the coming of calamities by offering Him the sufferings of the Son on the Cross, His Precious Blood and beloved souls who console Him forming a cohort of victim souls. Prayer, penance and courageous sacrifices can soften the Father’s anger[.]

On October 13 of that year, the anniversary of the 1917 Miracle of the Sun at Fatima, Portugal, Our Lady spoke the following to Sr. Agnes:

The work of the devil will infiltrate even into the Church in such a way that one will see cardinals opposing cardinals, bishops against other bishops … the Church will be full of those who accept compromises … If sins increase in number and gravity, there will be no longer any pardon for them.

With regular conflict between prelates of the Church in recent years, including the current controversy over the duty of bishops to deny Holy Communion to professed Catholic politicians who support direct abortion, who can deny the “increase in number and gravity” of grave sins in the world over the last century?

For one example, after the Anglican Lambeth Conference accepted the use of contraception in 1930, becoming the first Christian ecclesial community ever to do so, the increased use of these unnatural methods has introduced “massive social and psychological disorders” which have contributed to over 63 million direct killings of children in the womb, an acceptance of euthanasia, a high divorce rate, broken families, gang violence, along with the celebration of sodomy and the so-called “LGBTQ+” ideology.

Recalling the fact that abortion (Gen. 4:10) and sodomy (18:20-21) are sins that cry to heaven for vengeance, and Sodom was destroyed by fire from the sky (19:24), the next words of Our Lady of Akita to Sr. Agnes should be well noted:

As I told you, if people do not repent and better themselves, the Father will inflict a terrible punishment on all humanity. It will be a punishment greater than the Flood, such as one will never have seen before. Fire will fall from the sky and will wipe out a great part of humanity, the good as well as the bad, sparing neither priests nor faithful. The survivors will find themselves so desolate that they will envy the dead (emphasis added).

Never before have two nuclear powers gone to war against each other, with such weapons ironically serving, until now, as a stabilizing factor, deterring open conflict. But since the Joe Biden administration took power last year, war with nuclear Russia has shown itself to be an intended policy objective, beginning with manifest insults in March 2021 to the full funding of the Ukraine government and military with a recent $40 billion “aid” package.

Director of National Intelligence Avril Haines told a U.S. Senate hearing on May 10 that the administration recognized that Putin may initiate use of nuclear weapons if he perceives “there is effectively an existential threat to his regime and to Russia,” and further, such a scenario could occur if “he perceives that he is losing the war in Ukraine.”

In 2019, Princeton’s Program on Science and Global Security created a simulation of how nuclear war could occur between the U.S. and Russia, “based on real force postures, targets and fatality estimates.” It begins with Russian forces in the process of losing a conventional conflict against the U.S. and NATO and ends with 91.5 million casualties, including 34.1 million fatalities, with compounding increases in these numbers due to long-term nuclear fallout.

Despite these catastrophic dangers, the U.S. foreign policy establishment is dumping ever more sophisticated offensive weapons in Ukraine, while at least providing intelligence to the Ukrainian military assisting them in targeting one Russian ship and several generals for assassination, while bragging about it to the Western media.

Commentators have rightly called the administration’s policy in this regard, as well as the media’s pushing for escalation, “reckless,” “demented,” “crazy,” and “utterly nihilistic,” with some courageous congressmen objecting, including Rep. Matt Gaetz (R-FL), who charged the Biden administration with insanely “probing Putin’s nuclear redline.”

As the neocon plan to “bleed Russia” continues involving the massive rearming of Ukrainian forces and plans for a counteroffensive later this summer — with the implicit purpose of doing everything possible to ensure Putin “perceives that he is losing the war in Ukraine” — the dangers of nuclear exchange can only drastically increase with time in the coming months.

Though Our Lady of Akita’s reference to fire falling from the sky wiping out “a great part of humanity” may or may not refer to a nuclear exchange, her advised remedy remains the same.

Men must “repent and better themselves … The only arms that will remain for you will be the Rosary and the Sign left by My Son. Each day recite the prayers of the Rosary. With the Rosary, pray for the Pope, the bishops, and the priests.”

“Pray very much the prayers of the Rosary. I alone am able to save you from the calamities that approach. Those who place their confidence in Me will be saved,” the Blessed Virgin told St. Agnes.

After much testing and discernment, on Easter Sunday, April 22 1984, Bishop John Shojiro Ito issued a pastoral letter declaring the events of Akita to be supernatural, including a miracle involving the permanent restoration of Sr. Agnes’ hearing, as the Blessed Virgin Mary had promised her on May 30, 1982.

Our Lady of Akita, pray for us.

St. Joseph, pray for us.