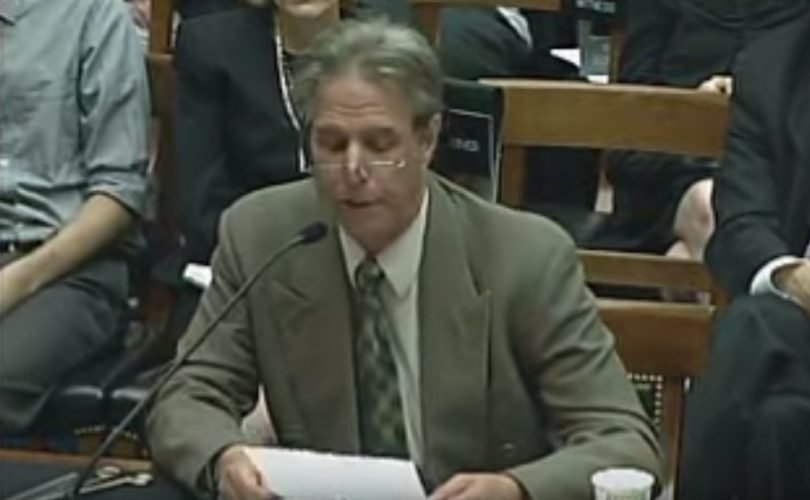 In 2012 a former abortionist, who admits to having committed around 1200 abortions, appeared before a U.S. House subcommittee. The hearing was on the so-called Pain-Capable Unborn Child Protection Act, which would ban abortions after 20 weeks in D.C., based upon the fact that unborn babies can experience pain at that stage of pregnancy.

“Once you have grasped something inside, squeeze on the clamp to set the jaws and pull hard – really hard. You feel something let go and out pops a fully formed leg about six inches long. Reach in again and grasp whatever you can. Set the jaw and pull really hard once again and out pops an arm about the same length.”

Dr. Anthony Levatino, who has since turned his life around and is pro-life, was speaking in favor of the ban. And his testimony is perhaps the most brutal explanation you will ever hear for why abortion is evil – plain and simple. (Read his testimony below, with the strongest portions in bold.)

For those who may be tempted to write off Levatino’s testimony because he’s just “another pro-life nutjob,” it’s interesting how his testimony has eerie echoes to that of notorious late-term abortionist Leroy Carhart, who is still involved in the gruesome trade. During a preliminary injunction hearing in a US District Court in 1997 on the issue of late-term abortions, Carhart testified that he would sometimes dismember advanced-stage unborn babies during abortions, while the babies were still alive. Carhart described in detail the process of grasping the limb of the baby to be removed, and then twisting it off. When asked if the babies usually die during the process of dismemberment, Carhart responded, “I don’t really know. I know that the fetus is alive during the process most of the time because I can see the fetal heartbeat on the ultrasound.”

How is this considered anything but evil?

Testimony of Anthony Levatino, MD, JD before the Subcommittee on the Constitution, Committee on the Judiciary, U.S. House of Representatives on The District of Columbia Pain-Capable Unborn Child Protection Act (H.R. 3803)
May 17, 2012

Chairman Franks and distinguished members of the subcommittee, my name is Anthony Levatino. I am a board-certified obstetrician gynecologist. I received my medical degree from Albany Medical College in Albany, New York in 1976, and completed my OB-GYN residency training at Albany Medical Center in 1980. In my 32-year career, I have been privileged to practice obstetrics and gynecology in both private and university settings. From June 1993 until September 2000, I was associate professor of OB-GYN at the Albany Medical College, serving at different times as both medical student director and residency program director. I have also dedicated many years to private practice and currently operate a solo gynecology practice in Las Cruces, New Mexico. I appreciate your kind invitation to address issues related to the District of Columbia Pain-Capable Unborn Child Protection Act (H.R. 3803).

During my residency training and during my first five years of private practice, I performed both first and second-trimester abortions. During my residency years, second- trimester abortions were typically performed using saline infusion or, occasionally, prostaglandin instillation techniques. These procedures were difficult, expensive and necessitated that patients go through labor to expel their pre-born children. By 1980, at the time I entered private practice first in Florida and then in upstate New York, those of us in the abortion industry were looking for a more efficient method of second-trimester abortion. We found that the “Suction dilation and evacuation” procedure (or “Suction D&E”) offered clear advantages over older installation methods. The procedure was much quicker and never ran the risk of a live birth.

Understand that my partner and I were not running an abortion clinic. We practiced general obstetrics and gynecology, but abortion was definitely part of that practice. Relatively few gynecologists in upstate New York would perform such a procedure at the time, and we saw an opportunity to expand our abortion practice. I performed first-trimester suction dilation and curettage abortions in my office up to 10 weeks from last menstrual period and later procedures in an outpatient hospital setting. From 1981 through February 1985, I performed approximately 1200 abortions. Over 100 of them were second-trimester Suction D&E procedures up to 24 weeks gestation, by which I mean 24 weeks from the first day of the woman’s last menstrual period (LMP), which is equivalent to 22 weeks post-fertilization age.

Imagine, if you can, that you are a pro-choice obstetrician/gynecologist like I once was. Your patient today is 24 weeks pregnant (LMP). At twenty-four weeks from last menstrual period, her uterus is two finger-breadths above the umbilicus. If you could see her baby, which is quite easy on an ultrasound, she would be as long as your hand plus a half, from the top of her head to the bottom of her rump, not counting the legs. Your patient has been feeling her baby kick for the last month or more, but now she is asleep on an operating room table and you are there to help her with her problem pregnancy.

The first task is to remove the laminaria that had earlier been placed in the cervix, the opening to the uterus, to dilate it sufficiently to allow the procedure you are about to perform. With that accomplished, direct your attention to the surgical instruments arranged on a small table to your right. The first instrument you reach for is a 14-French suction catheter. It is clear plastic and about nine inches long. It has a bore through the center approximately • of an inch in diameter. Picture yourself introducing this catheter through the cervix and instructing the circulating nurse to turn on the suction machine, which is connected through clear plastic tubing to the catheter. What you will see is a pale yellow fluid the looks a lot like urine coming through the catheter into a glass bottle on the suction machine. This is the amniotic fluid that surrounded the baby to protect her.

With suction complete, look for your Sopher clamp. This instrument is about thirteen inches long and made of stainless steel. At the business end are located jaws about 2 inches long and about 1/2 an inch wide with rows of sharp ridges or teeth. This instrument is for grasping and crushing tissue. When it gets hold of something, it does not let go. A second trimester D&E abortion is a blind procedure. The baby can be in any orientation or position inside the uterus. Picture yourself reaching in with the Sopher clamp and grasping anything you can. At twenty-four weeks gestation, the uterus is thin and soft so be careful not to perforate or puncture the walls. Once you have grasped something inside, squeeze on the clamp to set the jaws and pull hard – really hard. You feel something let go and out pops a fully formed leg about six inches long. Reach in again and grasp whatever you can. Set the jaw and pull really hard once again and out pops an arm about the same length. Reach in again and again with that clamp and tear out the spine, intestines, heart and lungs.

The toughest part of a D&E abortion is extracting the baby’s head. The head of a baby that age is about the size of a large plum and is now free floating inside the uterine cavity. You can be pretty sure you have hold of it if the Sopher clamp is spread about as far as your fingers will allow. You know you have it right when you crush down on the clamp and see white gelatinous material coming through the cervix. That was the baby’s brains. You can then extract the skull pieces. Many times a little face may come out and stare back at you. Congratulations! You have just successfully performed a second-trimester Suction D&E abortion.

If you refuse to believe that this procedure inflicts severe pain on that unborn child, please think again.

Before I close, I want to make a comment on the claims that I often hear that we must keep abortion legal in order to save women’s lives, or prevent grave physical health damage, in cases of acute conditions that can and do arise in pregnancy. Albany Medical Center, where I worked for over seven years, is a tertiary referral center that accepts patients with life-threatening conditions related to or caused by pregnancy. I personally treated hundreds of women with such conditions in my tenure there. There are several conditions that can arise or worsen, typically during the late second or third trimester of pregnancy, that require immediate care. In many of those cases, ending or “terminating” the pregnancy, if you prefer, can be life saving, but “terminating a pregnancy” does not necessarily mean “abortion.” I maintain that abortion is seldom if ever a useful intervention in these cases.

Here is why: Before a Suction D&E procedure can be performed, the cervix must first be sufficiently dilated. In my practice, this was accomplished with serial placement of laminaria. Laminaria is a type of sterilized seaweed that absorbs water over several hours and swells to several times its original diameter. Multiple placements of several laminaria at a time are absolutely required prior to attempting a suction D&E. In the mid-second trimester, this requires approximately 36 hours to accomplish. If one were to use the alternate method defined in federal law as Partial-Birth Abortion (but now generally banned), this process requires three days, as explained by Dr. Martin Haskell in his 1992 paper that first described this type of abortion.

In cases where a pregnancy places a woman in danger of death or grave physical injury, a doctor more often than not doesn’t have 36 hours, much less 72 hours, to resolve the problem. Let me illustrate with a real-life case that I managed while at the Albany Medical Center. A patient arrived one night at 28 weeks gestation with severe pre-eclampsia or toxemia. Her blood pressure on admission was 220/160. A normal blood pressure is approximately 120/80. This patient’s pregnancy was a threat to her life and the life of her unborn child. She could very well be minutes or hours away from a major stroke. This case was managed successfully by rapidly stabilizing the patient’s blood pressure and “terminating” her pregnancy by Cesarean section. She and her baby did well. This is a typical case in the world of high-risk obstetrics. In most such cases, any attempt to perform an abortion “to save the mother’s life” would entail undue and dangerous delay in providing appropriate, truly life-saving care. During my time at Albany Medical Center I managed hundreds of such cases by “terminating” pregnancies to save mother’s lives. In all those cases, the number of unborn children that I had to deliberately kill was zero.