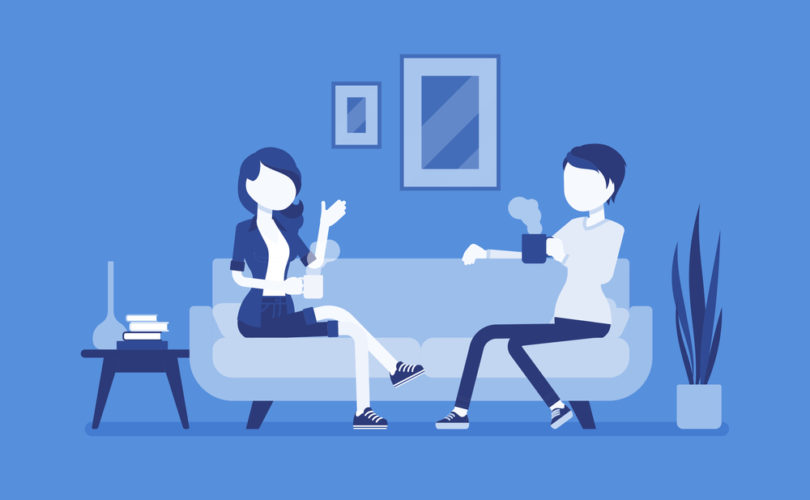 May 4, 2021 (LifeSiteNews) — Once upon a time, long, long, ago, marriage was considered a sacred covenant between a man and a woman. It was a relationship sealed before God until death brought separation. It was the context in which sex could be legitimately enjoyed for purposes unitive and procreative. From it flowed the family, which served at the foundation of any successful and prosperous society.

Now, of course, marriage has been hollowed out and reduced to a rider-ridden contract that rarely lasts for life and bears almost no resemblance to the sacred institution it once was. First came no-fault divorce. As always, the abuses that occur within any institution in this fallen world were used to gut it, and millions of homes collapsed as Mom or Dad walked away, leaving devastated children in their wake.

One of the greatest lies of the modern age is the one parents tell themselves about their little children in the wake of a divorce: “My kids want me to be happy.” No, they want you to love each other and be together and to be a family — but that fact is now fiercely denied.

Then, inevitably, marriage was redefined altogether. By the time the LGBT movement got to it, marriage was no longer for life; it was frequently intentionally childless; it was often something pursued exclusively for selfish reasons and discarded when something better came along. Redefining which romantic relationships qualified was not, at that point, much of a leap. After all, most of marriage’s defining characteristics had already been compromised. Why not the complementing and heterosexual nature of the couple?

Now, the New York Times is reporting, we are seeing the final step in reducing marriage to a coldblooded contract: “Platonic marriages,” in which best friends — no matter their sex — get “married” and, naturally, do not consummate the relationship. Consummation of the marriage bond — husband and wife becoming one flesh — has always been considered fundamental to the marriage being fully realized (and historically, there have been all sorts of bizarre traditions to confirm that this has taken place).

The Times gives several examples of best friends who are getting married, living together, and essentially granting another layer of paperwork to roommate status. Some refer to each other as “life partners,” and say they are pursuing marriage because “they want to be legally and socially recognized as a family.” These days, it seems that people want whatever relationship they pursue formally recognized by the state, which has replaced the church as the body that confers legitimacy.

The Times, of course, explained this new trend as the rectification of a previously unknown injustice. “It should be acknowledged that we’ve really normalized heterosexual monogamous romantic relationships to the point of stigmatizing other kinds of relationships,” a Californian family therapist told the Times. “All of this to say, I think this probably happens a lot, but people don’t talk about it much because their relationships are invalidated by others when they’re seen as not being part of the norm.”

In fact, friendships have always been part of the norm. They are just a different sort of relationship than marriage. It is an indication that people still recognize the fundamental importance of marriage that they so desperately wish to apply that label to any relationship they find significant, not realizing that by applying the term “marriage” to these couplings or contractual arrangements they are not actually bestowing more solemnity on them — they are simply gutting marriage of any solemnity it had to bestow in the first place.

Polyamory, polygamy, platonic relationships, same-sex couplings — marriage, now, is whatever people decide it is. Ironically, this is a sad bit of evidence that our culture is desperately trying to hang on to the glimmer of sanctity in the institution it has long since destroyed.