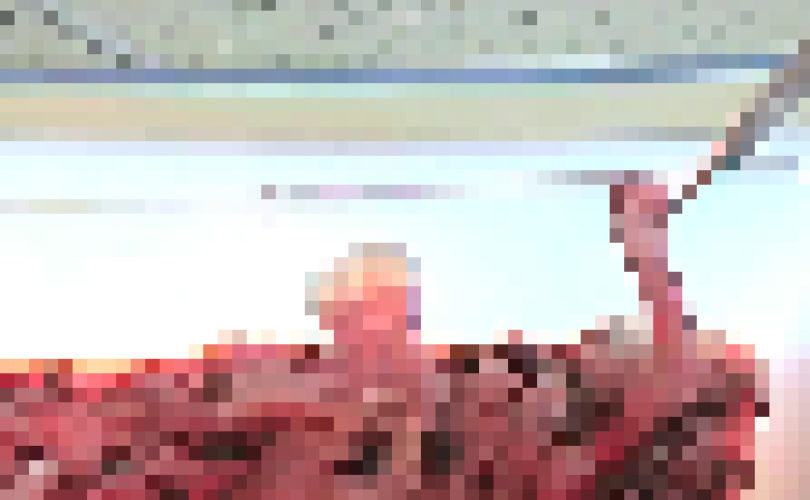 The non-pixellated version is shown below.

I’m about to show you something that, if you're alive and have a heartbeat, will deeply disturb you, and then make you hopping mad.

I warn you, it’s graphic. But everybody needs to see this. Because this is the truth. And even if the truth is difficult, and gruesome, and challenging, it must be known.

This morning the Center for Medical Progress released the latest in their series of undercover sting videos exposing the fact that Planned Parenthood is harvesting and selling the body parts of aborted babies.

The first part is plenty disturbing, as director of research for Planned Parenthood Gulf Coast, Melissa Farrell, discusses how she “diversifies” Planned Parenthood's “revenue stream” by selling aborted baby parts, and how their abortionists can modify the abortion procedure (Note: totally illegal) to obtain “intact” fetuses.

But then the camera moves into the lab, where workers are actually involved in dissecting and dismembering aborted babies to get the useful body parts.

Describing their “last case” of the day, one of the workers tells an actor posing as someone interested in purchasing fetal body parts, that “it was a twin” at about 20 weeks gestation.

The camera then pans over to a dish, filled with what Planned Parenthood describes as “tissue.” One of the workers uses tweezers to pick up the intestines, and boasts about how sometimes “the organs come out really, really well.”

And that’s when I saw it. A little, beautiful, perfectly formed hand, gently clenched in a fist – a hand attached to an arm that had been torn from its owner's body, and thrown in a dish swimming with body parts.

…And then I saw the foot. And the other foot.

I wish I could say I couldn’t believe what I was seeing. But I could, because I know what Planned Parenthood does. But there’s a difference between believing, and seeing.

And that’s why these photos must be shared as far and wide as possible.

After that, it gets even worse, as the man behind the camera uses his tweezers to pick up and inspect an arm and hand…and then the leg…and then another leg.

Yes, it is horrifying that Planned Parenthood is apparently lying about the fact that it makes a tidy profit off trafficking in the body parts of aborted babies.

The worst part is that every time Planned Parenthood sells a body part, it is because they have killed a baby, a human being like you and me – a human being that had the right to live, and love, and be, a baby whose life was summarily snuffed out, and turned into a “revenue stream.”

The worst part is that year after year, decade after decade, we let Planned Parenthood get away with the canard that they are only aborting “blobs of tissue,” or “products of pregnancy” – as if we don't all know perfectly well what the product of a pregnancy is: a baby.

I say, enough is enough. Shut Planned Parenthood down, now!