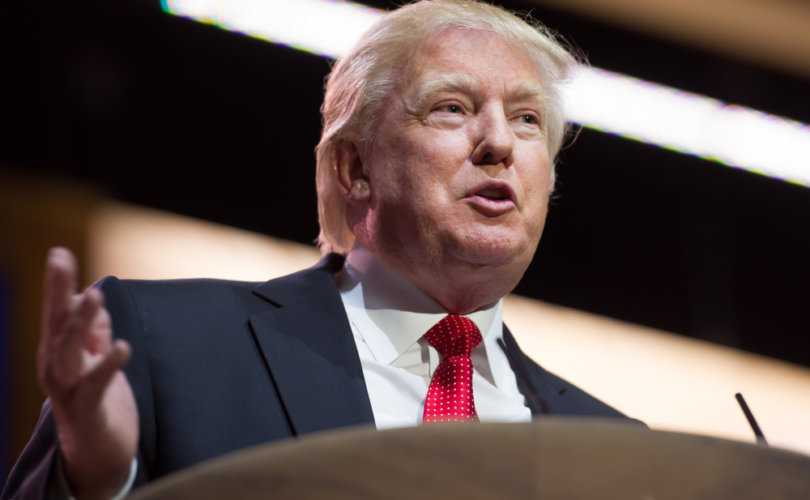 Nov. 14, 2016 (LifeSiteNews) – Since the election of Donald Trump, the level of meltdown on the Left has now reached proportions rivalling Chernobyl. University students at Cornell hosted a cry-in, meeting together to weep at the fall of Hillary Clinton. As per usual, more hate crimes were faked, and every bit of potentially racist graffiti was pounced on as evidence that Trump’s election would result in vicious race wars. Actual violence and rioting done by angry progressives has been almost completely ignored. And then, the one theme that keeps recurring on talks shows across the nation: fear. As the result of Donald Trump’s election, many people, apparently, feel as if the leadership of the country is now fundamentally opposed to them in some way, and they are scared.

Which is exactly how Christians have felt under Barack Obama for the past eight years.

Many of my non-Christian and liberal friends find it bewildering that both evangelicals and Catholics voted overwhelmingly for Donald Trump, a thrice-married casino operator infamous for his vulgar trash talk. I want to take a moment to explain to them directly why most Christians voted for him anyway. It’s simple, really: Christians voted for Donald Trump because they felt that the threat a de facto third Obama term posed to Christian communities was an existential one.

The attacks on Christians from the highest levels of government have been relentless now for nearly a decade. Obama wants to force Christian churches and schools to accept the most radical and most recent version of gender ideology, and he is willing to issue executive decrees on the issue to force the less enlightened to get in line. Christian concerns are dismissed out of hand as “transphobia.”

PETITION: Congratulate Trump, and urge him to keep his pro-life promises. SIGN HERE.

Meanwhile, Hillary Clinton informed one audience that Christians would have to change their beliefs on some issues. And now Christians are having conversations around the dinner table about what do if the government forces curricula on them that they cannot accept, because their own government is increasingly indicating that Christian parents are too homophobic and too hateful to teach their own children. Can you understand how terrified mothers and fathers are at the prospect that those in power want to actively prevent them from passing their beliefs on to their own children?

I can understand why those from some immigrant communities might be worried about how a Trump presidency could affect them personally—but as for the largely white liberal university students throwing a temper tantrum—what do you have to freak out about? No one is saying that you can’t pass your values on to your children. No one is saying you’re a bigoted, fascistic hater of minorities simply because you happen to have a different belief system. But they are saying that about Christians—and you were, too. And they mean it. The students weeping in fear at a Trump administration have nothing to worry about. No one’s going to cancel their Women’s Studies program or shut down their LBGTQ2etc Collective. Get over it.

And then there was the rapid rise of rainbow fascism. Christian bakers are under attack. Christian photographers. Christian pastors. Real people are losing real businesses that they had labored for years to build. Their way of life is being destroyed. In some cases, Christian business owners saw the wages they needed to feed their families dry up because they were targeted by gay activists and labeled hateful, homophobic bigots simply for declining to assist in celebrating a gay union. That’s all. They just wanted to live their lives in accordance with their own beliefs, and because of that, activists came gunning for them. It wasn’t good enough to go down the street to any number of photographers or bakers who would be more than happy to help celebrate a gay wedding. They needed to see those little family businesses destroyed, even if it meant that the baker and his family ended up on the street. Dissenters must be crushed.

These things happened, and are happening, and many of you shrugged your shoulders and thought to yourselves that the homophobes got what they deserved. You didn’t care about these people, and you didn’t respect their right to live out their beliefs because you thought there was something fundamentally wrong with those beliefs.

And then there was the fact that Barack Obama and Hillary Clinton wanted to force Christians to fund the abortion industry, something many of you support because everyone babbles on about “reproductive rights” without ever talking about what abortion actually is. Abortion. Google it. I’m challenging you in all seriousness. That’s how I ended up involved in the pro-life movement: by Googling it and realizing what abortion was. Take a second, and actually look at pictures of the dead babies, and then remember that Barack Obama even voted against protecting those children who survived abortion, and that Hillary Clinton defended abortion even in the latest stages of pregnancy.

Is it really so hard for you to understand that those who fight tirelessly to protect these babies might be willing to gamble on the support of a brash billionaire rather than cast their vote for someone who thinks the youngest members of the human family are nothing more than soulless trash? I’ve seen an aborted baby before. I’ve held a butchered little boy in my hands. Maybe if you did, too, you could understand why we don’t think Hillary Clinton is a good person. We think her political positions directly result in dead children, because that’s the truth.

This is not even to get into the fact that the Democratic war on religious liberty was so malicious it had them going to court to force nuns—a group called “Little Sisters of the Poor”—to fund birth control. Dissenters must be crushed, after all.

The simple fact is that Christians voted in self-defence. They voted to put the brakes on the relentless, eight-year-long assault not just on their values, but on their ability to live their lives unmolested without having radical progressives attempt to force some newly invented ideology down their throat or hang some new “phobia” label around their necks or garnish their wages to pay for medical exterminators to suction tiny human beings into bloody slurry. Most of these Christians are not activists. Most of them simply want to be left alone. But for eight long years, they weren’t left alone. And so this time around, they voted to give Obama and his progressive minions the hugest shove they could.

PETITION: Congratulate Trump, and urge him to keep his pro-life promises. SIGN HERE.

Donald Trump may well prove to be destructive force. Time will tell. But for many people, he is currently destroying all the right things. Michael Moore wasn’t wrong to refer to Trump as a “legal Molotov cocktail” that the voters threw right through the front window of the elites. Secular progressives have been using political correctness to strangle the life out of Christians, calling them every name in the book and treating them like seething, hateful gay-bashers. Now, the media saddled a man with every label they could possibly come up with—and he won anyway. Progressives created a system that would convict Christians every single time, replete with ever-shifting speech codes that informed any number of bewildered men and women that the hate they didn’t feel towards anyone was obviously there, anyway. And then a sledgehammer named Donald Trump showed up, and the harried and henpecked voters decided to use it to smash a system created specifically to marginalize and label them.

What you have to understand is that Christians hear the media much differently than the rest of you. They hear themselves being mocked and ridiculed by men like John Oliver, who believes that a man with a penis can simultaneously be a woman. They hear themselves being cursed as awful people by Samantha Bee, who thinks that it’s perfectly okay to stab a baby in the skull in the third trimester of pregnancy. They hear themselves being called hateful bigots by Bill Maher, who claims to value diversity. And they may chuckle painfully, but they also know that they are loathed by those who are now demanding to know how they could possibly have voted for Donald Trump over Hillary Clinton, a woman who would have taken her own sledgehammer to religious liberty at the very earliest opportunity.

We’ll have to see how a Trump presidency progresses. With men like Mike Pence around him, he may prove to be an ally to the Christians who cast their ballots for him last Tuesday. But even if he isn’t, Christians are simply relieved that he isn’t Hillary Clinton. As I pointed out prior to Election Day, most of us are quite aware that Donald Trump doesn’t care about abortion or religious liberty. But on the other hand, Hillary Clinton is passionate about abortion, and she is passionate about furthering her party’s radical social agenda. Even if Donald Trump does nothing for Christians, at least he’ll leave them alone. After eight years of Barack Obama, that would be a tremendous relief.

That’s why so many Christians voted for Donald J. Trump.