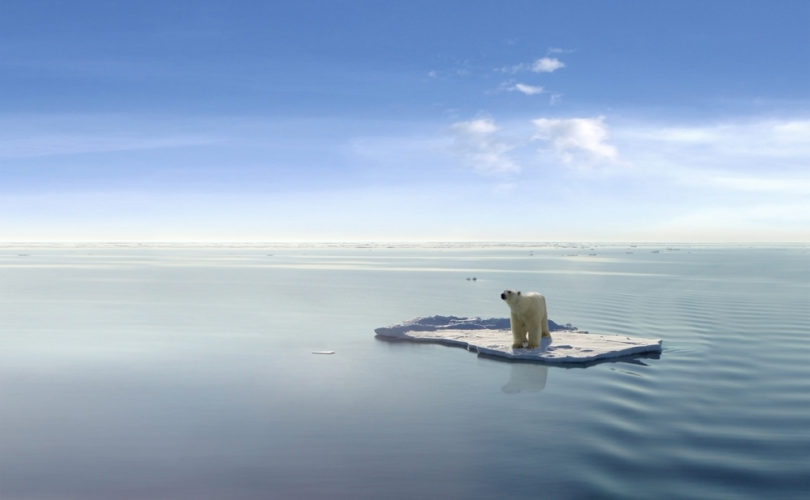 The polar bear population has been at a record level for the past several years contrary to alarmist claims.Shutterstock

Steve Jalsevac Introductory Comments: The Pope Francis encyclical on climate change, Laudato Si', is being heavily promoted in advance of the December, 2015 UN sponsored conference on climate change in Paris. It is believed that the moral authority of the papacy and the Catholic Church will motivate world delegates to finally agree to implement the plans of action proposed to counter this alleged man-made threat to the earth and its inhabitants of all kinds.

The many past environmental and climate mega-conferences have all failed to achieve agreement among states to implement the radical, extremely costly and revolutionary political and social proposals of the alarmist leaderships. In fact, public acceptance of climate alarmism has declined.

Developments related to the encyclical will accelerate when Pope Francis visits the U.S. this September and advocates for his encyclical at the United Nations, then to an unprecedented address to a joint session of the U.S. Congress and once again to a very willing President Obama at the White House. The build-up will continue up to the December UN meeting.

A serious problem is that the papal encyclical has a total climate alarmist bias. The many scientists who have expressed serious criticisms of alarmist  claims have been completely shut out of advising Pope Francis .

In the following article, Tom Harris relates the frustration and humiliation that his group of scientists and other experts experienced after traveling to Rome to attempt to provide at least some balance, which Pope Francis had publicly indicated that he wanted, to the currently only one-sided, very pessimist position of the Vatican on climate change.

The Pope’s climate letter urges ‘Dialogue with Everyone,’ so why did Vatican single out and harass us?

July 15, 2015 (PJMedia.com) – An encyclical letter is considered to be the most significant form of papal teaching for the world’s 1.2 billion Roman Catholics. Tragically, the June 18 encyclical letter on the environment from Pope Francis is riddled with contradictions and mistakes.

In the letter, “On Care for a Common Home,” Francis emphasized the importance of considering “a variety of opinions” about the problems we face:

Given the complexity of the ecological crisis and its multiple causes, we need to realize that the solutions will not emerge from just one way of interpreting and transforming reality. … No branch of the sciences and no form of wisdom can be left out … this Encyclical welcomes dialogue with everyone.

But not only has the Vatican failed to meet this standard, the members of the Heartland Institute delegation that traveled to Rome to urge the Vatican to reconsider its position on climate change and sustainable development in fact received the polar opposite of the encyclical letter’s recommended treatment.

Our opinions were not only ignored, but we were scoffed at and demeaned by high-level Vatican officials who called us deniers, Tea Partiers, and funded by oil interests.

Three members of the Heartland team were approved to take part in the news conference associated with the Vatican’s April 28 climate meetings. One, Marc Morano of the Climate Depot news service, described the experience:

The Vatican failed to treat Delingpole, Monckton, and myself with the same decorum as the other journalists. We were singled out and harassed at the April 28th climate summit in Rome.

Concerning the pontiff’s assertion in his encyclical that he wants to “encourage an honest and open debate,” Yore responded:

Based on our personal experience in Rome, there is no interest in hearing the other side of the science debate by the Vatican.

In his encyclical, Francis acknowledged the Vatican’s lack of expertise about climate change, writing:

On many concrete questions, the Church has no reason to offer a definitive opinion; she knows that honest debate must be encouraged among experts, while respecting divergent views.

The Vatican’s contradictions extend beyond its behavior: they even appear within the encyclical letter itself. The Pope stresses open dialogue, as in the quote above, but then the pope references “obstructionist attitudes” ranging “from denial of the problem to indifference,” supporting Yore’s contention that he in fact has no patience for divergent views on the topic.

Francis also contradicted himself by including numerous definitive opinions about climate change in his letter. After describing the science in a manner as overconfident as Al Gore’s – he even mistakenly calls carbon dioxide “pollution” — the pope concluded:

We know that technology based on the use of highly polluting fossil fuels — especially coal, but also oil and, to a lesser degree, gas — needs to be progressively replaced without delay.

Had Francis followed his own advice to listen to other points of view on global warming, he would have learned of the strong evidence that much of the climate change material in his encyclical is misguided.

For example, emeritus professor of meteorology Dr. Richard Keen of the University of Colorado-Boulder has since said:

Sections 23 and 24 of the Encyclical refer to numerous hypothetical disastrous consequences of climate change, or “warming.” But none of these projected catastrophic consequences are anywhere to be found on the real Earth.

Keen, an expert reviewer for the latest UN Intergovernmental Panel on Climate Change report, explained that there has been no global warming over the past 18 years. He continued:

Over the past two centuries humans have, through productive and beneficial endeavors, added one molecule of CO2 to each ten thousand molecules of air. Attempts at curtailing those human endeavors to remove that molecule would be flawed policies that will fail to solve a non-existent problem.

In his encyclical, Francis taught that “human life is itself a gift which must be defended from various forms of debasement.” He writes about “the moral imperative of assessing the impact of our every action and personal decision on the world around us.” The pope cited Saint Francis of Assisi, whose name he took as his “guide and inspiration” when he became the leader of the Catholic Church: “I believe that Saint Francis is the example par excellence of care for the vulnerable.”

Yet by promoting the idea that CO2 emissions must be reduced to prevent dangerous climate change, His Holiness unwittingly supports outcomes that hurt the world’s most vulnerable people.

For example: as a result of the expanded use of biofuels in an attempt to reduce emissions, 6.5% of the world’s grain now goes to fuel instead of food. This is causing food price increases that are a disaster for the world’s poor

This article was first published on PJ Media and is re-published with permission of the author.

Laudato Si’ ignores real gains for the environment and the poor​

Bishop who helped in first draft of Laudato Si’: Pope didn’t intend to pronounce on the science

Why is the Church entering the fray on ‘climate change’? And with such overblown rhetoric?