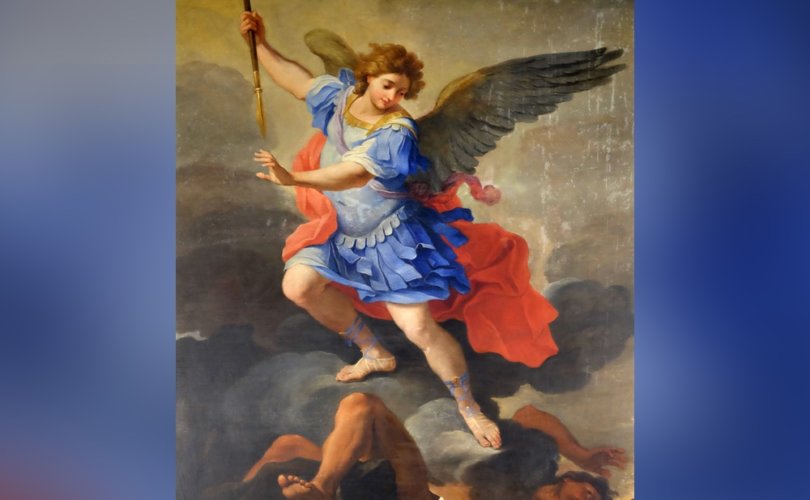 October 1, 2018 (LifeSiteNews) – Six United States bishops have now asked their priests to recite the Prayer to St. Michael (see the end of this article) after Mass. It was said at the end of Low Masses (less solemn Masses) from its institution by Pope Leo XIII in 1886 until 1964, and is still used in celebrations of the Extraordinary Form.

The context of this request from bishops is the sexual abuse scandal, a manifestation of demonic influence in the Church which surely calls for a response using spiritual weapons, as well as natural ones. The Prayer to St. Michael refers to the oppression of the Church by Satan, and the Church’s confidence in God’s power, wielded through St. Michael, to overcome him.

This kind of language is no longer familiar to many Catholics: it is rarely found in the liturgy as reformed after the Second Vatican Council, or in officially approved prayers and devotions. The bishops’ decision to bring this prayer out of retirement is part of a growing movement to recover the more forthright and supernaturally focused spirituality found in the Church’s tradition, in place of forms of words which appear unwilling to make supernatural realities clear.

The post-Conciliar change of orientation cannot claim justification from Vatican II. The Council’s Pastoral Constitution on the Church in the Modern World, Gaudium et spes 37 remind us:

A monumental struggle against the powers of darkness pervades the whole history of man. The battle was joined from the very origins of the world and will continue until the last day, as the Lord has attested.

This is exactly what the Prayer to St. Michael reflects. Why did it ever disappear from use?

Pope Pius XI understood that this cosmic conflict was also at issue in the Russian revolution. He directed that the Prayers after Low Mass, including the Prayer to St. Michael, be said “to permit the tranquillity and freedom to profess the faith to be restored to the afflicted people of Russia.” This intention is often linked to the significance accorded to the conversion of Russia by the revelations of the Blessed Virgin Mary at Fatima.

Pius XI’s intention was reiterated in 1952 by Pope St Pius X, but only twelve years later, in 1964, these prayers were abolished completely, and for practical purposes disappeared from the devotional lives of Catholics. The Second Vatican Council’s decree on the liturgy, issued only two years earlier, Sacrosantum Concilium, was in many ways very cautious about liturgical reform. However, those given the task of carrying it out were determined to strip Mass down to its bare essentials. Prayers appended to the end of Mass were natural targets of the editor’s scissors, but, as the reform proceeded, so were references to the angels and saints, their merits and prayers, the devil, sin, penance, and grace. St. Michael was a particular victim, disappearing not only from the Prayers after Low Mass, but in the new Missal being left out of the Confiteor and the Blessing of Incense. He also lost his separate feast day, Michaelmas, once one of the major feasts of the year, which became a general feast of the angels.

The downplaying of these themes in the liturgy was motivated partly by a desire that these texts should not be a barrier between Catholic and Protestants, and partly by an embarrassment felt by many Catholic theologians of the time and since to ideas perceived as “negative.” When, however, the reality around us shows a negative aspect – when sin and the influence of Satan become undeniably visible, as in the clerical abuse crisis – then to refuse to use this language stops looking like accentuating the positive, and starts looking like detachment from the reality of others’ suffering. Recognizing the activity of Satan is the first step to putting into words our confident plea for the necessary supernatural assistance against him.

The Prayer to St. Michael

Holy Michael Archangel, defend us in the day of battle; be our safeguard against the wickedness and snares of the devil. May God rebuke him, we humbly pray, and do thou, prince of the heavenly host, by the power of God thrust down to hell Satan and all wicked spirits, who wander through the world for the ruin of souls. Amen.