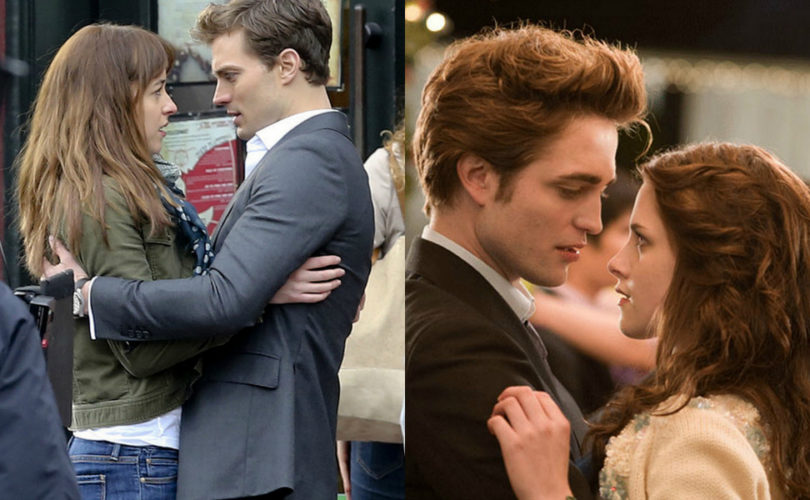 To prepare for filming, Dornan visited a sex dungeon like the one Christian Grey built in his apartment to satisfy his taste for violence and control.  After watching the things he’d be expected to do to his costar, he returned to his wife and newborn baby feeling dirty.  “I had a long shower before touching either of them,” he told Elle UK.  He even went as far as telling the UK’s Guardian newspaper that although he desperately misses his late mother, who died of cancer when he was 16, “it’s probably just as well she didn’t have to see Fifty Shades.”

Meanwhile, Dakota Johnson, who plays Ana Steele, told Glamour that even though she comes from a long line of Hollywood actors – her parents are Melanie Griffith and Don Johnson, and her grandmother is Tippi Hedren – she’s uncomfortable with the idea of them seeing her breakout role.

“I don't want my family to see [Fifty Shades], because it's inappropriate,” Johnson said. “Or my brothers' friends, who I grew up with. I think they'd be like, 'Blegh.'  Also there's part of me that's like, I don't want anyone to see this movie.”

So with all this hate for the series of books and the upcoming films, what is the secret to its massive success?

Jamie Dornan is curious about that himself.

“I wonder what it is about this set of books that has, excuse my pun, penetrated the global market,” he told Elle UK. “Mass appreciation doesn't always equate to something good. Think of Hitler! But I think, in this case, it must. It simply must. There's got to be merit in it if so many people agree.”

You’re not wrong, Jamie, but here’s a hint: It’s not about the sex.

To truly understand the success of Fifty Shades, one first has to revisit the book’s roots.  Despite a determined campaign of internet scrubbing by author E.L. James and her publishers, it’s still relatively common knowledge that Fifty Shades began its life as an online Twilight fan fiction serial called Master of the Universe.

Then going by the pen name “Snowqueen’s Icedragon,” or “Icy” for short, James (real name: Erika Leonard) published the story online as an X-rated reimagining of the blockbuster series about a teenage vampire and his obsession with an ordinary human girl. Master of the Universe transformed sparkly vampire Edward Cullen into a young billionaire entrepreneur (think Mark Zuckerberg with sex appeal and a sadistic streak), and mousy high school student Bella Swan into a mousy college co-ed who stumbles – literally – into Edward’s world and immediately captures his attention.

At the time, Twilight fan fiction had become so popular that entire small publishing houses were set up to “file the serial numbers off” the most read stories and republish them as original works. (Publishing fan fiction for profit is widely considered a violation of copyright law, so removing all reference to characters owned by other authors is a necessity if one wishes to sell a derivative work.)

One of these small publishers approached “Icy,” and she agreed to switch up the character names in order to publish her story as a series of e-books under a new pen name, E.L. James.  As they became increasingly popular, the rights were sold to Vintage, which republished them as what the world now knows as Fifty Shades of Grey.

So what is the secret to Fifty Shades’ success?  Easy.  It never strayed far from its source material.  Fifty Shades is popular for exactly the same reasons as Twilight, because it’s exactly the same story, just written for an older audience – an audience with deeper pockets and no meddling parents to say “no” when they ask to buy the book at the store, check it out at the library, or see the movie when it comes out in theaters.

Twilight was told from the perspective of Bella Swan, a shy and awkward teenage girl who, without even trying, attracts the attention and eventual obsession of Edward Cullen, an inhumanly attractive classmate with superpowers and a dark secret: he’s a vampire, and even though he is desperately in love with Bella, he struggles with his innate desire to hurt her.

In Fifty Shades, we have Ana Steele, a shy and awkward college girl who, without even trying, attracts the attention and eventual obsession of Christian Grey, an inhumanly attractive (he’s repeatedly described as an “Adonis”) man with incredible power and a dark secret: he’s addicted to violent sex, and even though he is desperately in love with Ana, he struggles with his innate desire to hurt her.

Does any of this sound familiar?

The commonalities between these two stories go much deeper than the ripped-off plotline.  The characters of Bella and Ana are both written as almost blank slates, onto which readers can project their own personalities.  (For the salty-language tolerant, The Oatmeal explains the mechanics of this process here, better and more concisely than I ever could.)

All we know about each girl is that she’s ordinary – like, so ordinary that if you looked up the word “ordinary” in the dictionary, you would find their pictures – only you wouldn’t; you’d find a little mirror reflecting your own face back at you, because that’s the entire point.  You’re meant to insert yourself into the story, and suddenly it’s you, in all your banal lack of glory, who has proven irresistible to these powerful, godlike, beautiful, deeply damaged men, and only you can help them find their humanity again.  The best part?  You didn’t have to do anything to capture their undying devotion but be yourself.

It’s a heady fantasy, no?

For the women who love Fifty Shades, the sex is largely beside the point.  (Let’s be honest; there’s better-written and much more explicit erotica out there for those who are into that sort of thing.)  The descriptions of sex in Fifty Shades range from the dryly clinical to the absurdly childish, with the main character constantly referring to her sexual organs as “down there.”  Penthouse Letters, this is not.

No, the appeal of Fifty Shades and Twilight alike is the fantasy that somewhere out there, there’s an extraordinary man (or, erm, vampire) who will adore you just the way you are, no matter how plain, how unaccomplished, how downright unremarkable.  If this has you thinking that maybe these women have a God-shaped hole in their hearts, you’re probably right.  Even The Oatmeal cartoonist Matthew Inman, an atheist, picked up on this in his above-mentioned critique of Twilight, labeling his cartoon rendering of the lead male character: “Edward Cullen – Also known as He-Man/Jesus Christ.”

“Imagine everything women want in a man, then exaggerate it by ten thousand – and you've got Edward Cullen,” Inman wrote.  “As far as the reader is concerned, Edward cares about nothing in the world more than [Bella]. What the author has done is created a perfect male figure – a pale Greek statue which the reader can worship and in turn be worshipped by.”

Substitute “Christian” and “Ana” for “Edward” and “Bella” in Inman’s commentary, and you’ll begin to understand what’s going on here.

The success of both Twilight and Fifty Shades stems from the battle that rages in all of us from the day we emerge screaming, naked, and helpless into this world.  On the one hand, we all want to be deeply loved for who we are.  On the other, we see ourselves as pathetically unworthy.

That feeling of unworthiness may come from a lot of different places – the media, society, maybe even our friends and families.  In fact, as I was writing this essay, a friend and fellow writer noted that the women who make up Fifty Shades’ core audience were born and raised in the late 1960s, and 1970s, when divorce was at its peak.  As a result, many of them – perhaps even the majority – were raised without a full-time father in the home.

Maybe they missed out on the experience of being the apple of their father’s eye, as Mom nursed whatever wounds drove the split in the first place, while Dad set up a new house and a new life with some other lady and different kids.  Perhaps in idolizing these damaged men who find healing and wholeness only by learning to unconditionally love these seemingly unworthy girls, they are unconsciously being swept up by a fairy tale that speaks not to their romantic desires, but some deep, unexamined childhood wound.  Since no one’s done a study on this, it’s only speculation, but I suspect the results of such a study would be telling.

That’s just one possible source of the emptiness books like Fifty Shades temporarily fill.  But the truth is, anyone who has ever felt unremarkable or invisible for any reason can put themselves in Ana’s shoes and understand her thrill at being chosen – her, of all people! – by a man with so much power he might as well be God.  And anyone who has ever tried to love someone out of a dangerous lifestyle – be it addiction, violence, self-harm, risky sexual behaviors, or heck, vampirism (you never know) – can relate to Ana’s joy as her steadfast love transforms Christian from a damaged, petulant dictator into a loving husband.

Ultimately, the secret to the success of Fifty Shades is that it puts the reader in the role of both the saved and the savior.  But that’s also precisely what’s so dangerous about this story – because Christian Grey is not God, neither is Ana, and neither are any of us.  In reality, Christian’s all-consuming “love” would warrant a restraining order, and Ana’s refusal to leave him would eventually land her at a battered women’s shelter or dead.  The same is true for the rest of us – bad things happen when we try to play God, or when we let someone else fill the role of God for us.  The only salvific love we’ll ever find in this world is divine in origin – not romantic.

This is our home turf, people … this is our story. If a hundred million people will shell out for a counterfeit paperback version of a love we live every day, we should see that not just as an attack, but an opportunity.

Love is our story.  Let’s tell it better.

Kirsten is a D.C. correspondent for LifeSiteNews.com.