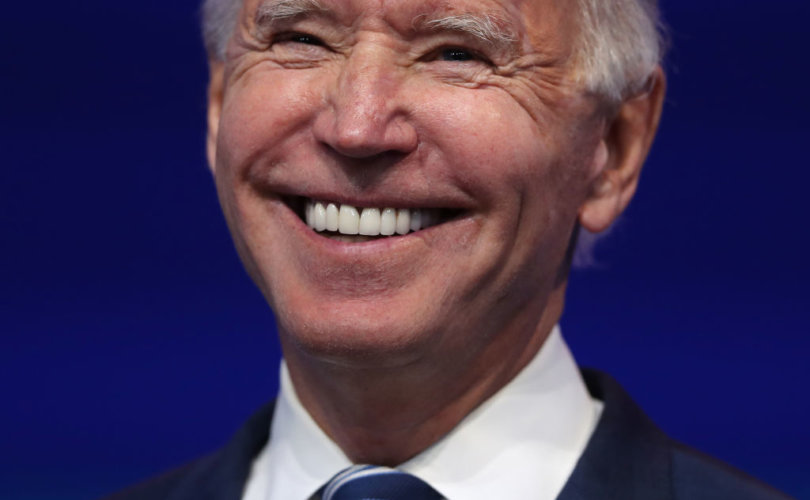 Joe Biden addresses the media about the Trump Administration’s lawsuit to overturn the Affordable Care Act on November 10, 2020 at the Queen Theater in Wilmington, Delaware.Joe Raedle/Getty Images

November 11, 2020 (LifeSiteNews) — What looks to be an election coup currently being carried out in the US has officially entered its second stage.

According to the New York Post, Joe Biden is now considering legal action to force the formal “transition” of power to him from the Trump administration.

This is treason. They have no right to do this. Nothing has been certified. They are actively undermining our country’s sitting president.

This is arrogation. It’s designed to give people the impression that this man has authority. He has no authority.

There is no such thing as the “Office of the President-Elect.” pic.twitter.com/nKKG7o27jV

The two were talking about the massive number of voting irregularities and fraud that’s been reported across the country.

One reporter told McDaniel she was touting a “conspiracy theory” – to which she responded by noting that there are hundreds of affidavits that testify to illegal behavior that took place on election night.

Prior to the election on November 3, the U.S. bishops as a whole did not address Joe Biden’s anti-Catholic position regarding faith and morals. The bishops’ lack of clarity is a scandal in itself and probably contributed to the possible election of a pro-abortion “Catholic” to the presidency.

The bishops could have spoken out against Biden’s stance collectively, but they were overwhelmingly silent. Because of this, they will be at least partly responsible for the policies advanced by a Biden administration, in the event that Biden is sworn into office.

Since Archbishop José H. Gomez and the USCCB prematurely congratulated Joe Biden as “the second United States president to profess the Catholic faith,” Gomez has announced that Archbishop Allen H. Vigneron will lead a “working group” to deal with a Biden Administration.

Although Joe Biden professes to be a Catholic, he supports policies that directly oppose the teaching of the Catholic Church, including abortion, homosexual “marriage,” and transgenderism for children.

“[Biden has] given us reason to believe that he will support policies that are against some fundamental values that we hold dear as Catholics. These policies include the repeal of the Hyde Amendment and the preservation of Roe v. Wade. Both of these policies undermine our pre-eminent priority of the elimination of abortion,” said Gomez.

On November 9, Archbishop Strickland of Tyler, Texas tweeted: “A dark cloud has descended on this nation when the USCCB and Planned Parenthood speak in unison in support of a Biden-Harris administration that supports the slaughter of innocents by abortion for all 9 months of pregnancy.”

Additionally, Archbishop Samuel Aquila of Denver, Colorado and Archbishop Charles Chaput have both declared publicly that Joe Biden “should not receive Holy Communion."

Unfortunately, Cardinal Wilton Gregory of Washington, D.C. has said that he will give Holy Communion to Biden because “it’s a matter of the responsibility that I have as the archbishop to be engaged and to be in dialogue with him, even in those areas where we obviously have some differences.”

Bishop W. Francis Malooly of Wilmington, Delaware and Bishop McElroy of San Diego also congratulated Biden in statements, but they have not indicated whether or not they would administer Holy Communion to him.

The bishops should not congratulate someone who has betrayed his Catholic Faith like Joe Biden has. It's an embarrassment and a scandal.

The United States Conference of Catholic Bishops has finally spoken on Joe Biden and Kamala Harris....

Not to chastise them for their blatant anti-life, anti-family and anti-Catholic views, but to "congratulate" them on "[being elected]"!

BUT, as everyone know, the anti-Catholic Biden-Harris ticket has NOT been elected.

Please SIGN and SHARE this urgent petition to the U.S. Catholic bishops telling them to retract their premature and offensive statement on the media's call of the election in Biden's favor.

As of the launch of this petition on November 9, NOT ONE STATE has certified the election results. All of the results are tentative and many are being litigated.

So, this is not the time for the bishops to falsely assert that Biden "has received enough votes to be elected the 46th President of the United States."

That's just not true, and for the bishops to willingly play along with the media's attempt to sweep allegations of voter fraud under the rug, is shocking behavior.

And, while Joe Biden may profess the Catholic Faith, he has also stated his support for abortion, homosexual "marriage," and recently, transgenderism for children.

For bishops, therefore, to congratulate a traitor to the Catholic Faith like Joe Biden, it requires a disturbing level of arrogance and pride.

That is not to say they should stand in judgement. But to congratulate such a man, rather than chastise him, sends exactly the wrong message to the faithful, 50% of whom are believed to have supported Biden in his election bid.

Stop ingratiating yourselves to a person who is advocating mass murder! Stop congratulating this anti-Catholic "Catholic."

For goodness' sake, grow a backbone and start defending the Faith!

“It’s not a conspiracy!” she exclaimed.

But the press doesn’t want to do that. Their job in this stage of the coup is to push as quickly as possible the “transition” from the Trump administration to the Biden administration.

To their eternal shame, the U.S. Conference of Catholic Bishops is also going along with this hoax. They sent a letter this past weekend congratulating Joe Biden on becoming the second “Catholic president” in American history.

Perhaps they’ve forgotten, but Joe Biden has officiated several gay “marriages.” He’s also pledged to drag the Little Sisters of the Poor back to court and is fully in favor of the LGBT “Equality Act,” a bill that would threaten the religious liberty of Catholic schools across the country.

Joe Biden’s certainly not a Catholic in good standing. Shame on our bishops for supporting this nonsense.

What we’re seeing from the corporate media is a complete mirage, an illusion, a phony, well-crafted movie, and everyone in the establishment media — even the so-called “conservative” media — is in on it.

They wasted no time declaring Biden the winner of this election, even using the term “President-Elect” when in fact it's not until after the Electoral College casts its votes that that term comes into effect.

We’re all being put through a major psy-op, or, ‘psychological operation’. By hosting interviews with Biden supporters and theorizing for hours on end on what he might do as president, the media are programming us.

They want those of us on the political right to simply give up while making sure the left is so thoroughly convinced that Biden won, that, should things end up going in Trump’s direction later on, they’ll be so furious that they’ll go out and riot with Antifa and Black Lives Matter and burn the country down.

The Democrat strategy all along has been to create such a massive amount of chaos and fraud that it’d be impossible to trace and then to get the media and Big Tech to ignore and censor those exposing it. They wanted, quite simply, to break the system.

If Trump pulls this out and ends up with enough legal votes to secure him another four years in office, he’ll go down as one of the greatest presidents in US history. He’ll have saved the nation from a coup attempt so deep and so massive, it’ll be one of the most decisive victories ever won by a president in defense of the American people against a hostile force.

If he doesn’t win, and the forces of evil are successful in their stealing and lying, my guess is God will hold them to account for their sins in the very near future. Nations do their penance here on earth, not in purgatory. Prepare accordingly.