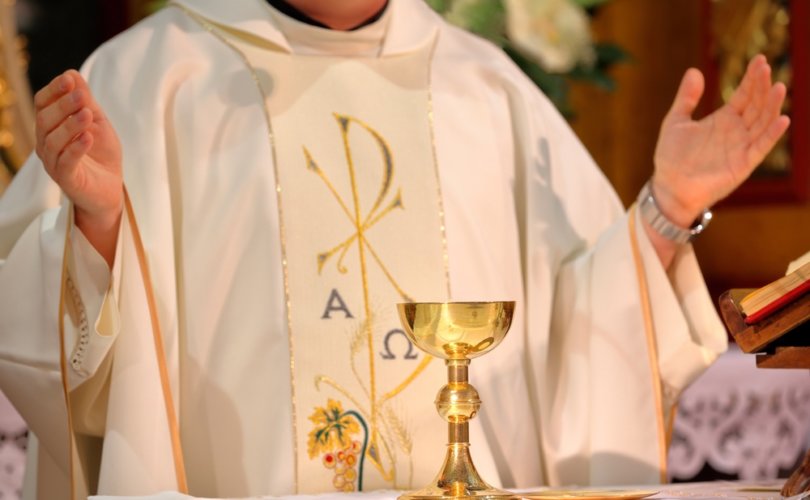 November 2, 2018 (LifeSiteNews) – Once upon a time, a very important person in my life died. I attended the funeral. It was a Novus Ordo canonization ceremony, conducted by a priest and three women in skirt-suits ministering in the sanctuary. Everyone at the funeral was dressed in black—except for the priest, who was wearing white. The disjunct was glaring and tasteless. The contrast between the deep human instinct of mourning, which can be said to be an ineradicable part of the sensus fidelium, and the crackpot liturgical reformers who introduced white as a color for Masses for the dead, was never so obvious to me.

The day before, however, my family and I had gone to a traditional Requiem Mass, sung by a priest friend. The contrast was not just profound, but shocking. Between that day and the following, we were emotionally suspended between two radically different offerings for the dead: one that took death with deadly seriousness, that cared about the fate of the departed soul, and allowed us to suffer; another that shuffled death to the side with platitudes and empty promises. The contrast between Friday’s black vestments, Dies irae, and whispered suffrages and Saturday’s stole-surmounted white chasuble and amplified sentiments of universal goodwill seemed to epitomize the chasm that separates the faith of the saints from the prematurely ageing modernism of yesterday.

I found myself thinking: The greatest miracle of our times is that the Catholic Faith has survived the liturgical reform.

A correspondent once wrote to me about his own similar experiences, and I would like to share his reflections.

I’ve just returned from my grandfather’s funeral. He was a fallen man, whose hope of salvation rests only on God’s infinite mercy and many of our prayers—a reality which was lamentably absent from the prayers and ceremonies of the new order of Christian Burial as I experienced them. I can’t tell whether the priest was selecting only the most sanguine of the options in every case, or whether he was reading the proper prayers constituting the rite, but I was appalled (no pun intended) throughout to hear absolutely no mention of purgatory, atonement for sin, or even the shadow of a doubt that the deceased is already in heaven. Instead, from beginning to end, we were bid to rejoice that the soul of Grandpa stood even now in the light of God’s face.

The overwhelming impression received—even without the tincture of an overly saccharine homily about the sure and certain hope we can have of our salvation—was that N. already sang with the angels, that thus no mourning is necessary, and all prayers for his repose would be superfluous. In fact, the almost off-handed blitheness and platitudinous manner with which the need for tears and mourning was dismissed, in light of his sure salvation, was really quite offensive. As if to say, “Death’s really not such a big deal, after all.”

Of course, the white vestments and pall only added to that impression, so that I was overwhelmed with the sinking and sickening feeling that here, too, the new funeral rite offers us a symbolically denuded, sensitively reconstructed, sterilized and therapeutic experience of Christian mourning that refuses to quake in the face of awesome metaphysical realities, in the face of the fearful judgment seat of Christ (as the Byzantine liturgy puts it).

In short, I felt cheated out of a good mourning. If this is all we get at death, is the Christian life really worth living? Is it really so heroic to die in the faith, if our mourning is so prosaic and our fate so predictable? My father and I declared afterwards, in the presence of witnesses, that we are to be given a traditional funeral at any cost!

The primary purpose of the traditional Mass for the Dead is to pray for the soul of the departed, that it may be saved and, if in need of purification (as the vast majority of saved souls will be), may be delivered soon from the fires of Purgatory. Hence the ancient Requiem Mass focuses all of its attention on the faithful departed. There is no homily; gone are blessings of certain objects or of the people; a special Agnus Dei begs for the repose of souls; the Propers are a continuous tapestry of prayers for the dead; and so forth.

The way that modern funerals have been turned towards the emotional relief of the living and the “celebration” of the mortal life of the deceased is, in reality, a double act of uncharity: first, it deprives Christians of the opportunity to go out of themselves in love by praying for the salvation of their loved one’s soul, the opportunity to exercise a great act of spiritual mercy rather than being the passive recipient of an act of spiritual mercy; second, it deprives the departed soul of the power and consolation of collective prayer on its behalf. It is bad for the dead and bad for the living.

Of course, all of this presupposes an orthodox understanding of the Four Last Things, which can seldom be assumed of clergy or laity.

How, how often, and how much we pray for the dead makes a real difference, according to the tradition of the Catholic Church. Prayer, including the offering of the Holy Sacrifice, is a particular human action that takes place in time and space, and therefore has an effect proportionate to the intensity with which it is performed and offered to God. Hence, that we pray intently and frequently for the souls in Purgatory is good for them and good for us.

To be able to do so, we must believe in what we are doing, be reminded of its meaning and its urgency by the very prayers themselves, and have suitable opportunities at our disposal. The postconciliar church has deprived Catholics of all of these things to one degree or another, and it is only now, in the spreading rediscovery of liturgical tradition, that we are beginning to see the return of earnest prayer for the dead at traditional Requiem Masses.

What, then, are we to do? We must restore the Requiem Mass whenever and wherever possible. We should give priests who can celebrate it stipends and intentions. We should make sure our Last Will and Testament includes specific instructions to have a traditional Latin Requiem Mass offered for us, and leave some funds for it. (It should be noted that any Catholic is permitted to ask for and receive an Extraordinary Form Requiem Mass, as this booklet from the Latin Mass Society of England & Wales explains in full.) We should attend Requiem Masses when they are offered in our vicinity and pray earnestly for the dead, as we hope someday our loved ones will do for us.