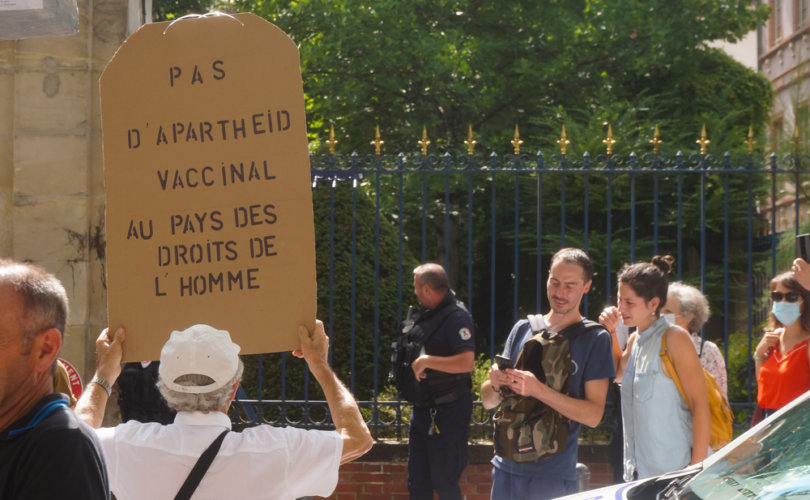 Protests against vaccination segregation are occurring all over the world.Shutterstock

(LifeSiteNews) – You are surely well aware of the divide that has cemented itself in society as a result of vaccination segregation. Not all people who chose to take the experimental COVID jab are afraid of the unjabbed, and more than a few are quite critical of the segregation measures that have been implemented.

However, it cannot be ignored that public health officials have done everything they could to drive a fear-based hysteria of the unvaccinated as some sort of disease-peddling class of unclean citizens.

How many times have we heard terms like “pandemic of the unvaccinated”? There is no evidence for this, in fact there is growing evidence to the contrary. The dreaded Omicron variant – which causes common cold-like symptoms – has been spread round the world by the vaccinated. And more and more regions are now finding that COVID-positive vaccinated patients are filling up death tallies.

Nonetheless, in an age of double speak and memory holes, unhinged health tyrants like Australia’s Dan Andrews have continued pushing the narrative of a “pandemic of the unvaccinated.”

This isn’t much different than saying that wearing a helmet will protect your head from trauma, but not from other people who don’t wear helmets and may or may not have hit their heads.

At any rate, reason and rationality are not required in the COVID era, and Andrews’ sentiments have been echoed to an alarming degree by the man in charge of public health for the province of Ontario.

Dr. Kieran Moore has consistently been one of the most egregious disseminators of anti-unvaccinated propaganda in the anglosphere.

A montage that has gone viral (pun intended) presents a collection of the various claims he has made since the summer about the dangers of the unvaccinated walking among us.

Since August, Ontario’s Chief Medical Officer of Health, Dr. Kieran Moore has repeatedly used aggressive and frightening language when referring to those who’ve chosen not to receive a C19 vaccine.

Dr. Moore must resign, and apologize to Canadians.

In August, he said, “The fourth wave is primarily being fueled by the unvaccinated amongst us.”

Could you imagine a phrase with more contempt for a fellow citizen? He could have phrased it a number of different ways, but instead he said, “unvaccinated amongst us.” Apparently, it is “us” i.e., the double-jabbed, and “the unvaccinated” that is the group of people who walk “amongst us” like zombies looking to eat our brains.

When Canadian Thanksgiving approached in October, he said, “if it’s a mixed group of vaccinated and unvaccinated … I would suggest you keep your masks on … ” It is bad enough to think that families should not show their smiles to one another after almost two years of separation, but the messaging of fear was even worse.

The idea that families should only gather in “mixed” groups clearly sends the message that individuals should be worried about being around a loved one who has made a different medical choice. There is no data to suggest this is valid, and it is an absurd and dangerous way to live.

In November, he addressed questions from the media surrounding the issue of fake vaccine passports being used to enter into establishments, which I can attest to as being widespread across the province. He said that any transmission on these settings where the unvaccinated had snuck their way in had “to be because unvaccinated are mixing with vaccinated … ”

There is a word for this sort of separation of people based on biological considerations; it is called apartheid.

Two days ago, Dr. Moore was at it again, “a basic means of protecting individuals is stopping the mixing of unvaccinated and vaccinated.”

It is amazing that the vaccinated class is so scared of the unvaccinated. Such a disbelief in the efficacy of vaccines would usually render someone an “anti-vaxxer,” you would think.

This is no laughing matter, as it is having real consequences on the personal lives of many people. I personally know more than a few people who have been unceremoniously cut out of their family traditions because they will not be coerced into taking an abortion-tainted jab against their will.

It is having a demoralizing effect on marriages as well, as some couples are divided on the issue, which means they cannot go into public places together like they used to, when one does not have proof of vaccination. In some cases, a spouse will cave to the pressure and take the jab against his or heer will, which cannot be good for marital cohesion.

Perhaps what is most sad is the veritable hatred that has arisen because of such rhetoric. A screenshot of a text conversation has made the rounds on social media in Ontario – I can attest to its veracity as I have spoken to the person who posted it – and it is heartbreaking.

A 12-year-old boy was reportedly told by his peers to kill himself because he wasn’t jabbed and “will kill others.”

“We’re all in this together” quickly mutated into hatred against the unvaccinated resulting in a 12 year old child being told to commit suicide today.

This is heartbreaking and has gone too far. Our children deserve better. CC: @fordnation @celliottability pic.twitter.com/GZJxwIF9eC

This is where such hateful rhetoric leads, and I am positive there are many more cases of this that we are unaware of.

Jesus Christ gave a prescription of what fate should befall those who “scandalize one of these little ones:” “It would be better for him that a millstone should be hanged about his neck, and that he should be drowned in the depth of the sea.” (Matthew 18:6)

1
Former NFL linebacker dies suddenly at 25, no cause of death given
2
Mark Houck details Planned Parenthood escort’s vulgar harassment of his son in Fox News interview
3
Jordan Peterson organizes pro-family alternative to World Economic Forum that begins meeting this fall
4
Brave priest speaks out against ‘shadow Church’ suppressing his faithful brethren
5
‘We will say no’ to legalized sodomy: African politician objects to Pope’s remarks before visit
Subscribe to Daily Headlines »