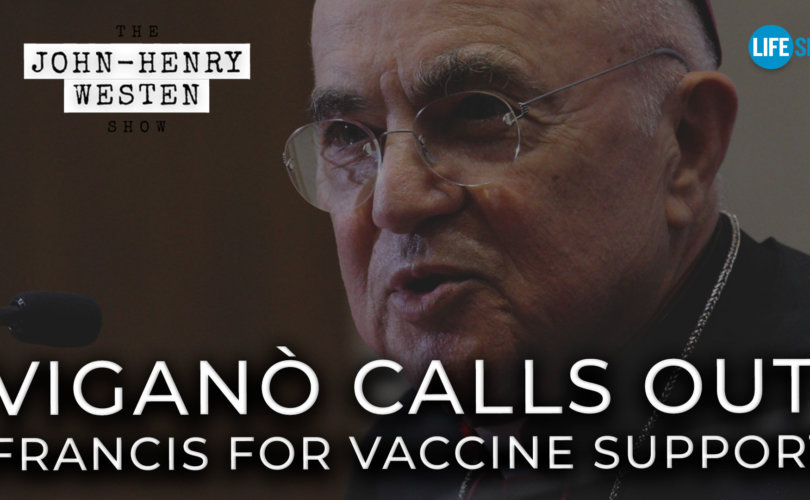 January 15, 2021 (LifeSiteNews) – The Vatican is reporting that Pope Francis and Pope Emeritus Benedict have both taken the abortion-tainted COVID vaccine. Meanwhile, Archbishop Carlo Maria Viganò has issued a scathing response to the Pope’s suggestion that everyone else must take it, too. And finally, it’s not only Nancy Pelosi who is trying to incite a race war in America. Her cancerous falsehood is spreading, and I’m going to debunk it right now.

After Speaker Pelosi’s racially charged rhetoric last week, other leftist politicians, intelligentsia, and media figures have piled on. Pelosi claimed that those at the Trump rally on January 6 had “chosen their whiteness over democracy.” Yes, she seriously said that.

But it’s not only her. Now, Congresswoman Cori Bush has called President Trump the “white supremacist in chief.”

And check out this Vox headline, which is so slanted it’s hard to imagine. “Whiteness is at the core of the insurrection!” Unbelievable.

In that Vox article, University of Pittsburgh history professor Keisha Blain added re-iterated Pelosi’s falsehood about whiteness. “I have a hard time believing anyone who says they are shocked by what took place in the Capitol on January 6,” she remarked. “I have no idea what it will take for people to stop being shocked by how whiteness works in American society.”

Professor Jeremi Suri from the University of Texas at Austin is quoted in the publication Inside Higher Ed: “Today’s terrorism is at the heart of the Republican Party, which now, in much of its leadership, has become a white supremacist Al Qaeda.”

The lies of the political and academic class are mirrored by lies from the mainstream media. As LifeSite’s VP Gualberto Garcia Jones put it in an outstanding must-read piece at LifeSite:

In one breathless video after another, the leftist press has depicted the invasion of the Capitol as a day of “unprecedented violence.” But was it really unprecedented? Were these breathless reporters on a deserted island all of last summer? In Minneapolis alone, 1,500 buildings were burned down this summer. That’s just one city.

At the protests that laid siege to the White House during the manufactured outrage of BLM, 60 secret service agents were seriously injured and the historic D.C. church where presidents have worshipped for decades burned. What was the response by the media to the black lives matter violence?

As Gualberto Garcia Jones, who was also on the ground in DC at the Trump rally, says about the violence at the Capitol:

No conservative is denying that those responsible for actual violence and destruction of property be prosecuted to the full extent of the law. What we are pointing out is the oppressive double standard in the American justice system where almost no one gets prosecuted for injuring 60 secret service agents at the White House, or the burning of 1,500 buildings, or the looting and ransacking of one American city after another, or the weeks-long assault of police precincts, or the laying siege to federal courthouses; all of this debilitates the people’s faith in a justice system and results in the loss of the rule of law.

And in other news, the Vatican has confirmed that both Pope Francis and Pope Emeritus Benedict XVI have taken the COVID vaccine, only days after Pope Francis appeared on Italian television saying everyone must take the vaccine.

I find this so sad for many reasons. Firstly, this relatively untested vaccine has not shown to protect others from getting COVID — we still apparently need masks and social distancing. It is less effective even than the treatments for COVID such as HCQ and Ivermectin, which have been working for countless doctors treating their COVID patients. Moreover, the vaccines themselves have all sorts of negative side effects. And finally, they are abortion-tainted in the most gruesome way and thus — according to Cardinal Pujats, Bishop Schneider and other prelates — morally impermissible to use.

On a recent episode, I went through all of this with vaccine researcher and expert Pamela Acker. You can watch that full interview by clicking here.

And now, you can see why Archbishop Carlo Maria Viganò responded this morning to Pope Francis’ vaccine push with a scathing column you can read at LifeSite. Here’s a bit of what he said:

It is disconcerting that, after unscrupulously demolishing no small number of Catholic truths in the name of dialogue with heretics and idolaters, the one dogma which Bergoglio is not ready to renounce is that of obligatory vaccination …If it is possible to set aside revealed truth in the name of ecumenism and inter-religious dialogue, it is likewise not licit to question the dogmas of Covid, the revelation made by the media about the pandemic, and the salvific sacrament of the vaccine.

I know that it seems there is a tsunami of bad and scary news happening all over the world just now. So, I wanted to close off with a great clip from the new interview LifeSite’s Claire Chretien did with the indomitable pro-life warrior Austin Ruse.

Looking at the incoming Biden administration and what it will mean for the pro-life movement, Austin nonetheless said we should be “happy warriors” and realize that God intended us for this time of history. God made you and me to accomplish His Will at this very moment. Christ says His grace will be sufficient for you despite anything that the world can throw at you. Amazing.

Please do watch that full interview between Austin and Claire.

God will surely give you all you need to be a saint, or, as Austin says, “the halos are hanging from the lowest branches.” It’s time to be a happy warrior. All you have to do is reach up for one of those halos and grab one! Viva Christo Rey!