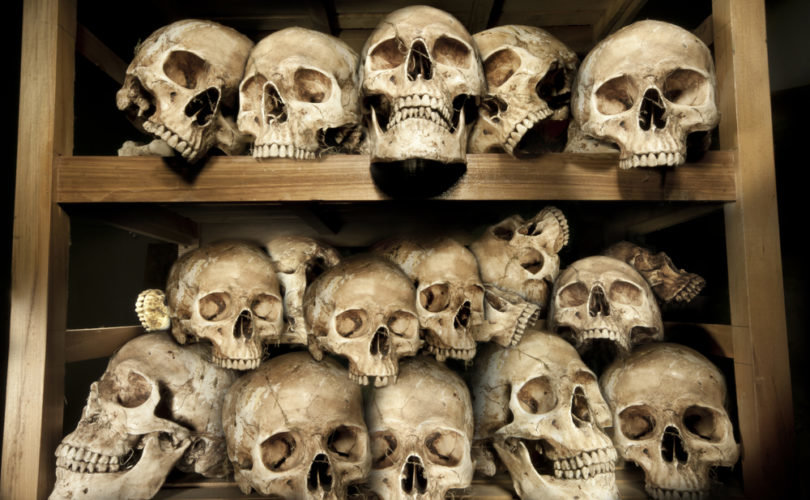 The concept of 'legal personhood' has literally left a sea of corpses in its wake. So why do we continue to use it?

I’ve been on campus at the University of Central Florida this week with a team of volunteers, debating university students on the issue of abortion. One mark of our generation seems to come up in many of my conversations: An ignorance of history. “He who does not know the past,” John G. Diefenbaker once noted, “can never understand the present, and he certainly can do nothing for the future.” A prescient statement—in regards to abortion, we are destroying the future, child by butchered child.

Time and time again, students bring up the same tired arguments to support abortion. Once you’ve established the scientific basis for the pro-life position, they respond blithely, “Perhaps the child in the womb is a human being, but it’s not a person.”

“It that’s the case,” I respond, “Let’s take a look at when the concept of ‘legal personhood’ has been used as a device to deprive human beings of their human rights based on arbitrarily selected criteria.” The list is devastating.

They’re often stunned when I respond by telling them that they’re using discriminatory and exclusionary language: “What? Why?” I ask them to respond to one simple question: “Name one time in human history when the phrase 'legal personhood' was used to include or protect a group of people.”

Blank stares. Not a single student can name a single instance of the idea of “legal personhood” being used to protect human beings and ensure that their right to life is respected.

“If that’s the case,” I respond, “Let’s take a look at when the concept of ‘legal personhood’ has been used as a device to deprive human beings of their human rights based on arbitrarily selected criteria.”

And today, in 2015, millions of developing human beings in the womb are poisoned, shredded, dismembered, and discarded by nations that often begrudgingly recognize their humanity, but deny their “legal personhood.”

Every single one of these examples differs drastically, but there is one common denominator. In each case, dehumanization led to victimization. In each case, “human rights” became a meaningless term, as the right to life inherent to our humanity was instead deemed a privilege to be given by the strong to the weak, with the hated or the inconvenient often excluded. Those who commit abortions may not be dehumanizing pre-born children in the womb with malice. But the end result—victimization—is still the same nonetheless.

“Your ideas concerning legal personhood have a long history,” I tell the students. “Do you think that history might reflect badly on your position? Do you see parallels?”

In most cases, they do. “So what, in your view, should we do about this difficult abortion situation?” one young man asked me yesterday.

“It’s simple,” I responded. “Human beings have human rights. Human rights must begin when the human being begins, or we are only granting rights based on arbitrary criteria that will lead to the victimization of some. In a society where different religious groups and different cultures believe different things about the pre-born child in the womb, we must ensure that the rights of the youngest human beings are protected based on who they are, not how certain groups of people might feel about them. Perhaps different groups disagree about ‘legal personhood,’ or when the pre-born human gets a soul, or whether consciousness translates into value. But in order to protect all human beings in a multicultural society, we have to fall back on a scientific fact we are all forced to recognize: The human being begins his or her life at fertilization. That is the only rational point at which we must recognize their human rights.”

“And what about personhood?” the young man asked, nodding slowly.

“Let me ask you this,” I said. “Every pro-choice person I’ve talked to today has had a different opinion about when the pre-born child becomes valuable. Some say twelve weeks, some say eighteen weeks, some say twenty-four. They all have different reasons for their opinion, and different reasons for feeling about pre-born humans the way they do. But should pre-born humans be protected based on a scientifically knowable fact—that they are unique, unrepeatable human beings—or based on how different groups of people in our society feel about them? Which is the more rational, humane, and moral way of dealing with this question? In which human rights doctrine—our consistent one or their arbitrary one—is every human being, regardless of age, vulnerability, race, or creed—kept safe?”

“Only in yours,” he admitted. He stood up, still nodding. “Your view is the only one that is consistent and makes sense.”

Our culture may not know their history well. And that’s why it’s the responsibility of those who fight for the human rights of pre-born children to point out that the intellectual history of “legal personhood” is a laundry lists of discrimination, exclusion, and bloodshed. The opinions of pro-“choice” people should not be permitted to infringe on the fundamental right to life of other human beings. Their feelings regarding the value of the youngest members of the human family should not provide a justification for the barbarism of abortion. Their trash philosophy should not be legislated. Rather, when we are asking ourselves who is owed human rights, we can only have one moral answer: Human beings.