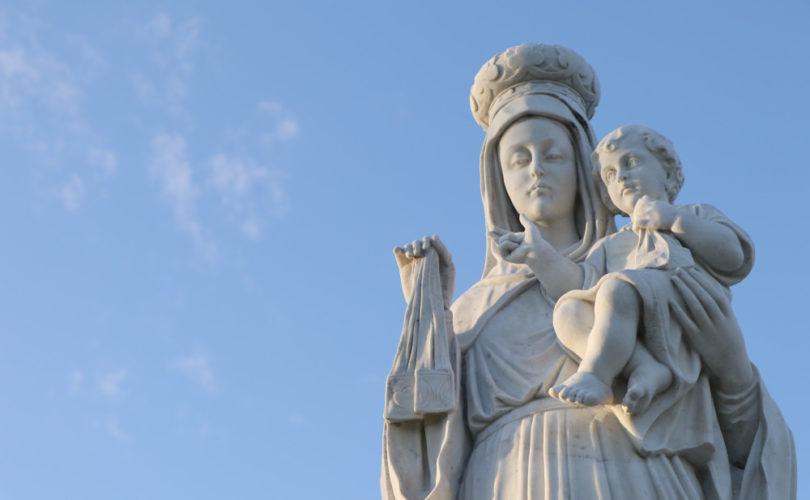 Statue of Our Lady and the child JesusUnsplash

May 4, 2021 (LifeSiteNews) — Through the miraculous conception of the Son of God in the womb of the Virgin — the “great thing,” the miracle of miracles, that He who is mighty has done for her — God has given a new beginning to all women. Reflecting on Mary is the best way to give meaning to the observance of Mother’s Day.

“In the fullness of time, God sent His Son, born of woman” (Gal. 4:4). For St. Paul, these two aspects are inseparable: the sending of the Father’s only-begotten Son, and the birth of that same Son in time, in the human nature He took from His Mother. He who has only a Father in His divinity has only a Mother in His humanity. The Person of Jesus Christ, true God and true man, has a heavenly Father and an earthly Mother. Christ brings the grace and truth of God to mankind; in the person of Mary, the first believer, the human race receives Him and responds with a resounding Yes! — Be it done to me, Thy will be done on earth, in Bethlehem, in Egypt, in Nazareth, as it is in heaven, in the Son’s glorious communion with the Father in the Holy Spirit.

Those who adhere to Christ are making their own the solemn fiat of Mary, which in turn echoed another fiat thousands of years earlier: God’s Fiat lux, “Let there be light,” on the first day of creation. It was at the beginning of time that God said Fiat lux, and now, “in the fullness of time, God sent His Son”; and how did He send Him? How did the God by whose command the entire cosmos came into being out of nothing, choose to re-create the world in grace? “God sent His Son, born of woman.” The sun of justice, the dawn of redemption, is ever preceded by the morning star of Israel, Miriam of Nazareth.

There is no redemption of man without the motherhood of Mary, and this means, too, that the divine image in man, tarnished by sin, is restored to its original purity only through her maternal hands, and must bear the likeness of her face and heart, her faith and prayerfulness, her love, her sorrows, and her joys. To the extent that one is becoming more like Christ, one is also becoming more like Mary. The Son is no more to be divided from His Mother than from His Father; only if His human nature could be severed from His divinity and consigned to oblivion would it ever come about that Mary should cease to play her singular role in the economy of salvation. As He has ever been and will ever be the unique Son resting in the bosom of the Father, so from the moment of the Incarnation, He will always be the Son of the Virgin, and she the woman “full of grace.”

At the Annunciation, Mary receives her Son not only in the capacity of an individual woman but also as a representative of humanity, remarks St. Thomas (Summa theologiae III.30.1). Her ecce ancilla Domini, “Behold the handmaid of the Lord,” is the definitive human answer to the proud non serviam with which the ages have echoed since the Fall of Lucifer and the Fall of Adam.

When the Father sent His Son to the lowly handmaid, He entrusted the sublime mystery of the Trinity, the long-hidden secret of His Divine Being, to her Immaculate Heart. When Gabriel explains how the conception will take place, the mystery of the Three in One is for the first time openly revealed. In her lowliness, a humility born of hunger for God and awareness of His greatness, Mary is ready to drink in the knowledge of His being, and to receive abundantly the love which is His inner life. God reveals Himself to Mary as Love, both imminently — within the everlasting communion of Father, Son, and Holy Spirit — and towards the world, ad extra: love in Three Persons, One of Whom is sent to save the world from eternal suffering.

Christ’s “follow Me” is the call to throw off the shackles of death, to participate in the divine life of love, to achieve the union of friendship with God, in whom man’s dignity is found, apart from whom nothing is good, nothing holy. This call, and the command to love even as Christ did, is unique to Christianity: “by this love shall men know that you are my disciples.” It is Mary’s fiat that gives fallen humanity the opportunity to partake of all these graces, to drink deeply of this “new wine” given by Christ “in the fullness of time” (cf. Jn. 2:1–11).

Moreover, “Mary, the woman of the Bible, is the most complete expression of this dignity and vocation” to follow Christ, to bear Him within a loving heart (Mulieris Dignitatem [MD] §17). Mary is pre-eminently “blessed among women,” not only in the singular privilege of her divine Motherhood, but also in her singularly perfect following of her Son. She is the exemplar of the disciple, the one who follows and is taught. Even as the Word is the perfect Image of the Father, so Mary is the perfect image of the Son. And just as Jesus gives mankind access to the Father, so Mary leads us always and only to her Son, whom she loves with an ardor that dazzles even the Seraphim.

While it is true that God sent His Son to the whole world (cf. Jn. 3:16), Christ was given first and most interiorly in the unrepeatable relationship of mother and child. “It is not just a matter here of God’s words revealed through the prophets; rather with this response [Mary’s fiat], the Word is truly made flesh. Hence, Mary attains a union with God that exceeds all the expectations of the human spirit” (MD §12). This gift is unique to the one woman who is truly the Mother of Jesus and hence the Mother of God (Theotokos); yet the gift has repercussions in all of feminine humanity. Since women are able to follow Mary either as consecrated virgins or as dedicated mothers, they share the glory with which God has blessed those states through their perfection in the Virgin Mother.

The Son of God could have come to us in many ways, for the power of God is no less infinite than His creativity. He could have formed a body for Himself out of the slime of the earth, as He did when creating Adam; He could have simply decreed that a fully mature body come to be ex nihilo. He chose, in His wisdom and love, to become man through the path of human birth; He chose to be the Son of Mary, Filius Mariae.

This was, however, no ordinary conception and birth, but a miraculous one, taking place in and from a virgin. In the one person of Mary, motherhood and virginity are united, each in its full glory, indicating the convergence of these two exemplary forms of womanly service (cf. MD §64). Each of these vocations is essentially both a gift of self and the entrusting of others to the woman’s care, through physical or spiritual motherhood (or both). Mary, as the archetypal woman, shows us the true meaning of woman’s vocation to give birth, to nurture and protect life.

Mary, the Mother of God, brought Christ into the world: she is the one who gave Him to us. To bring Christ into the world is the vocation of every Christian in keeping with his particular vocation; but for women it takes the special form of conceiving, giving birth, nurturing and protecting life, and interceding for others, striving to bring forth “the hidden man of the heart” (cf. 1 Pet. 3:4).

Can we not say that this mystery and miracle of Christ’s coming into the world is distantly reflected in every new child created by God; in every birth, whether physical or spiritual; in every lesson at a mother’s knee or prayer of intercession? For not only is each soul entrusted to a mother who thus reduplicates Mary’s love (and thus expresses God’s love for the child), but each soul bears within it an actual or potential likeness of Christ. “Whoever receives one of these little ones in My Name, receives Me” (Mk. 9:37).