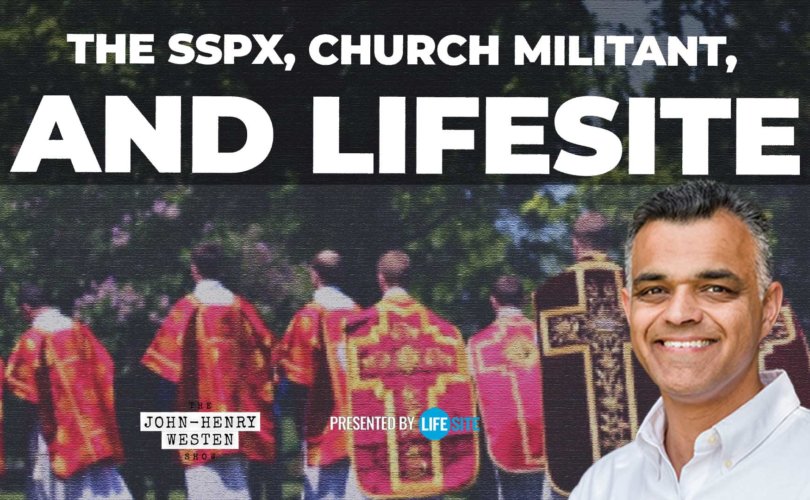 December 4, 2020 (LifeSiteNews) – Dear LifeSite readers, we have received many responses regarding our initial coverage of allegations of sexual abuse within the Priestly Society of Saint Pius X. What has been most disturbing in all this is the reaction from Church Militant. We have been called “frauds” by Michael Voris, and this is particularly sad as I consider him a friend. I’ll address these concerns in this special episode.

Let me begin with the mission of LifeSite, which is to educate and to activate people to change the culture to the Truth – the Truth with a capital T – which is Jesus Christ.

We want every story, every video, every text to give glory to God. That being said, we live in a fallen world and thus have to report on many horrible things. Nevertheless the aim remains the same. And when we report on horrible things, it’s to shine light on evil to cast it out, and to purify Holy Mother Church to better help her in her mission of getting souls to heaven.

Now let’s get to our coverage of the SSPX abuse cases. First of all you should know how LifeSite got into this investigation in the first place. It was Michael Voris asking us to engage in it. At LifeSite we take all investigative journalism very seriously and so we had two reporters delving into the facts of the case for months. They conducted dozens of interviews, they acquired court documents, police records, spoke to victims, spoke to priests of the Society, and chronicled their findings meticulously. Honestly, they deserve great commendation for their work.

Once we started looking into the situation, we discovered a definite bias against the SSPX on the part of Church Militant which in our studied analysis has led to some problems with their investigation.

Church Militant’s headline on their first story covering abuse cases in the SSPX was titled, “SSPX: ‘Sympathetic to Perverts’”. Their lead reporter on the story Christine Niles has called the SSPX a “cult” and their CEO Michael Voris has, on Twitter, referred to the SSPX as a “Nazi pedophile cult.”

Let me be very up front about where LifeSite stands regarding the SSPX. We stand where the Catholic Church does on this question. Remember that Catholics are permitted to attend Masses at SSPX parishes, and thanks to Pope Francis, are able to have their confessions heard by SSPX priests and in 2017 the Vatican permitted the faithful to go have their marriages witnessed by SSPX priests. Likely one of the best summaries of this comes in a post by Fr. Z.

Archbishop Carlo Maria Vigano recently gave his opinion on the SSPX. Writing in September to Catholic Family News, Archbishop Vigano said, “I consider Archbishop Lefebvre (founder of the SSPX) an exemplary confessor of the Faith, and I think that by now it is obvious that his denunciation of the Council and the modernist apostasy is more relevant than ever.”. The Archbishop commended the “hidden and often silent work” which “has been carried out by the Society of Saint Pius X” as deserving of “recognition for not having allowed the flame of Tradition to be extinguished at a moment in which celebrating the ancient Mass was considered subversive and a reason for excommunication.”

There is another heroic bishop who has expressed himself on this question – Bishop Athanasius Schneider. Bishop Schneider’s vantage point is important especially since he was asked by the Vatican to make an official visit to SSPX seminaries on behalf of the Holy See. He visited two SSPX seminaries in 2015 and shared his observations with the news service Adalente la Fe.

“To my knowledge there are no weighty reasons in order to deny the clergy and faithful of the SSPX the official canonical recognition,” he said. Bishop Schneider noted “the SSPX believes, worship and conducts a moral life as it was demanded and recognized by the Supreme Magisterium and was observed universally in the Church during a centuries long period.” The bishop also notes that “the SSPX recognizes the legitimacy of the Pope and the diocesan bishops and prays for them publicly and recognizes also the validity of the sacraments according to the editio typica of the new liturgical books.”

His conclusion was “This should suffice for a canonical recognition of the SSPX on behalf of the Holy See.”

LifeSiteNews asked Bishop Schneider for his comment on investigations into sexual abuse by priests associated with the SSPX and in response he said:

Recently, one could observe that the Society of St. Pius X (SSPX) has been made from various sides a target of attacks in connection with cases of sexual abuse. The detection and transparent processing of cases of pedophilia should be done in a necessarily objective and thoroughgoing manner, irrespective of the persons or ecclesiastical communities concerned and without making any exceptions.

If the SSPX is accused of failing to prevent and effectively manage cases of pedophilia on the part of its members, then for the sake of fairness, all dioceses around the world and all religious communities should as well be investigated, where in some cases one could find shortcomings maybe to the same or greater extent. Furthermore, it is part of fundamental justice and logic that religious communities or dioceses cannot be held responsible for the atrocities which their members or employees committed after they had been separated or dismissed from these communities. If one were to follow such logic, the Augustinian order, for example, would have to be held responsible for the anti-Semitic statements of Martin Luther, their former member. In coming to terms with atrocities committed by clerics, one should be guided only by truth and justice, without regard to the person.

On the other hand, this coming to terms with the past must not be used to unleash additional personal antipathies against a certain Church superior or against a certain religious community. Emotional neutrality is necessary for a fair judgment. The Word of God should be the guiding principle here: “If you are angry, do not sin!” (Eph. 4:26) and “The anger of man does not produce the righteousness of God.” (James 1:20)

Our main investigator Stephen Kokx has no axe to grind with the SSPX. He himself attends SSPX Masses. But he is by no means what an op-ed at Church Militant charges – an SSPX “mole in LifeSiteNews.” Stephen has done excellent work for us at LifeSite and is a true gift to our mission. Everyone who knows him, knows him to be fair, objective, and truth-seeking. In college, he was a liberal who voted for John Kerry and Barack Obama. He came to an authentic Catholic faith 7 years ago at the age of 27 after spending many years in the spiritual wilderness.

One of the most outlandish claims against LifeSite’s reporting is that Church Militant says their sources said “Kokx had been ‘harassing’ victims with his questioning, impugning their integrity and calling into question their veracity.” Church Militant reporter Christine Niles says “Church Militant was shown his line of questioning, and we agree.”

We reviewed his questions and they are not out of line. It is obviously difficult to ask questions of abuse victims and reporters must do so with care, but we must also try to ascertain the facts as there is ample evidence that at times accusers have given false testimony.

And finally, I wanted to address the situation with Michael Voris and Christine Niles personally. I consider you both friends. We have prayed together and conversed about the difficulties afflicting the Church and the world. I admire your tenacity and your bravery, your professional look and feel in that amazing studio of yours, and your teaching of the faith especially in its difficult aspects.

I do believe we can respectfully challenge one another even when we believe there is error in our brother’s approach. But such disagreements should not involve ad hominem attacks, name-calling, and disparaging one another. From my perspective we are all trying to fight the same fight: the fight for Truth, the fight for Christ against Satan and all his pomps and works.