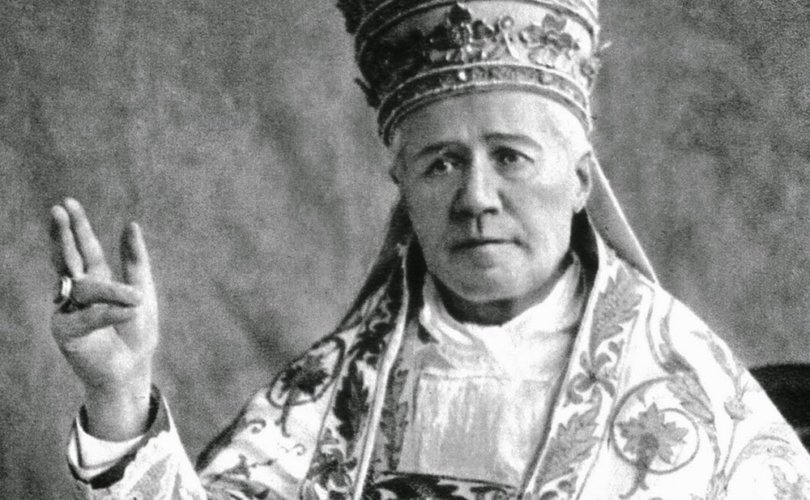 July 20, 2018 (LifeSiteNews) – With all the hue and cry over U.S. Supreme Court nominations, one is left with the impression that the vast majority of people living in the modern West have completely lost any notion about the very purpose of civil government. Its purpose is to aid citizens in acquiring natural virtues (on which depend such great goods as friendship, the family, and the common good of the entire people) and to render as easy as possible the attainment of happiness, which consists in the knowledge and love of God.

This is not my idea, but Pope Leo XIII’s:

Civil society, established for the common welfare, should not only safeguard the well-being of the community, but have also at heart the interests of its individual members, in such a manner as not in any way to hinder, but in every manner to render as easy as may be, the possession of that highest and unchangeable good for which all should seek. (Immortale Dei)

A question immediately follows: Are the laws and customs of the State supposed to reflect and embody Catholic truth, or not? The answer is yes—contrary to the modern insistence that the State should always be religiously neutral and separated from all supernatural concerns. The reason why is explained by two outstanding popes of the past who confronted the modern situation with perennial Christian truth.

As soon as the State refuses to give to God what belongs to God, by a necessary consequence it refuses to give to citizens that to which, as men, they have a right; as, whether agreeable or not to accept, it cannot be denied that man’s rights spring from his duty toward God. Whence it follows that the State, by missing in this connection the principal object of its institution, finally becomes false to itself by denying that which is the reason of its own existence. These superior truths are so clearly proclaimed by the voice of even natural reason, that they force themselves upon all who are not blinded by the violence of passion; therefore Catholics cannot be too careful in defending themselves against such a separation. (Au Milieu des Sollicitudes)

Leo XIII’s successor, St. Pius X, wrote to the French again in 1906, in the aftermath of the anti-clerical “Law of Separation”:

That the State must be separated from the Church is a thesis absolutely false, a most pernicious error. Based, as it is, on the principle that the State must not recognize any religious cult, it is in the first place guilty of a great injustice to God; for the Creator of man is also the Founder of human societies, and preserves their existence as He preserves our own. We owe Him, therefore, not only a private cult, but a public and social worship to honor Him. Besides, this thesis is an obvious negation of the supernatural order. It limits the action of the State to the pursuit of public prosperity during this life only, which is but the proximate object of political societies; and it occupies itself in no fashion (on the plea that this is foreign to it) with their ultimate object which is man’s eternal happiness after this short life shall have run its course. But as the present order of things is temporary and subordinated to the conquest of man’s supreme and absolute welfare, it follows that the civil power must not only place no obstacle in the way of this conquest, but must aid us in effecting it. (Vehementer Nos)

Both popes were addressing a nation that had long been Catholic and was still largely Catholic, and which therefore had solemn public obligations to the true religion. But what about secular and pluralistic societies—should they, too, aspire to an explicitly Christian and Catholic government?

Let us think this through. Wherever the faith is vibrantly and courageously lived—and even if this is no longer the case today, it has been in the past, and it could be again in the future—it is not only possible but likely that statesmen will become imbued with the Faith. This will tend to affect for the better their practical judgments and way of life. A practicing Catholic politician will never “leave his faith behind” in his decisions; he will view temporal realities from the eternal and divine perspective of revealed truth.

If we accept St. Thomas’s definition of reason as a participation in the eternal law—that is, in eternal wisdom, the mind of the Creator Himself—then even to “judge according to natural law,” as all statesmen must do, is in fact to apply a divine measure to human realities. Failure to do this is not just an incidental failure; it is the total failure of prudence. A ruler cannot be a ruler at all, let alone a good one, if he is not seeking always to judge and legislate the affairs of temporal life according to unchanging principles.

The Catholic view is simply that such principles may and must include supernatural principles as well as natural ones. Catholics reject any understanding of politics that would remove or relativize natural law by making the will of a majority, or the will of a dictator, the source of right. Fascist Germany, contemporary France, Canada and the United States in their liberal drift, are alike in this way: each has let what is right and wrong be determined by the autonomous will of man.

We have seen where this ends up: the Gulag, the concentration camp, the abortion mill, the anti-culture of “whatever.” If we want to end up in a better place, and ultimately in heaven, we need to rethink, from the ground up, what government is for, what transcendent norms it ought to follow, and how it must justify itself before the eyes of God and men.