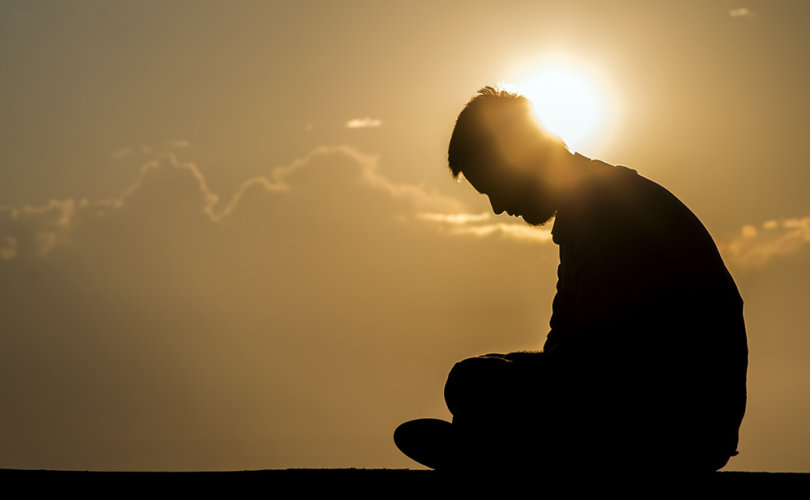 Note: numbers before quoted paragraphs are as published in Cardinal Sarah's book.

May 12, 2017 (LifeSiteNews) – Why have we seen such a dramatic increase in anxiety, fear, personal disorientation, irrational anger and forced imposition of political correctness over the past 50+ years in developed nations? Have you noticed how many now reject reason and sound arguments and accept only “facts”, “evidence” or “studies” that agree with what they desire – no matter how pathetically flawed their supporting items are? There is a surprising cause for most of this and an ages-old, surprising remedy.

We are in an age of increasing social madness. Cardinal Robert Sarah, in his new book, The Power of Silence, reveals this to be symptomatic of a widespread spiritual illness in modern Western culture. This illness, according to him, is largely caused by an absence of crucially needed, God and truth-revealing periods of silence of the ears, of the eyes and of the heart in the life of modern men and women.

Yes, silence. Sarah shows the way out of the tyranny of destructive external and internal noise and the incredible power and necessity of silence, which he proclaims is “more important than any other human work.”

Reading the comments under LifeSite’s well-researched and written reports, we are frequently struck by the inability of so many to calmly think and reason and to appreciate the implications of what the news reports reveal. Reason, facts, solid research – are all given much less importance, if any, these days than politically correct and especially emotional considerations. Modern man allows feelings and images to dominate and enslave him, much to his personal and social detriment.

Cardinal Sarah warns us that,

47. Humanity itself has returned to the sad prophecy of Isaiah, which was repeated by Jesus: “seeing they do not see, and hearing they do not hear, nor do they understand…. For this people's heart has grown dull, and their ears are heavy of hearing and their eyes they have closed, lest they should perceive with their eyes, and hear with their ears, and understand with heart, and turn for me to heal them”. (Mt 13:13, 15) p.44

Because of all the noise experienced by our eyes, ears and hearts, modern man no longer hears, experiences and knows God. He is unable to comprehend the purpose and even the value of his life and the lives of others. Hence the acceptance of abortion, euthanasia, homosexuality, transgenerism and many other anti-human perversities. Today's men and women and youth are lost and swirling in a downward spiral of self-destroying anxieties, fears, vulgarity, disorientation and violence.

Sarah goes so far as to proclaim that, “In killing silence, man assassinates God.” p.57

Modern civilization does not know how to be quiet

Let me further quote liberally from Cardinal Sarah and the astonishing insights in his book:

74. Our world no longer hears God because it is constantly speaking, at a devastating speed and volume, in order to say nothing. Modern civilization does not know how to be quiet. It holds fourth in an unending monologue. Postmodern society rejects the past and looks at the present as a cheap consumer object; it pictures the future in terms of an almost obsessive progress. It's dream, which has become a sad reality, will have been to lock silence away in a damp, dark dungeon. Thus there is a dictatorship of speech, a dictatorship of verbal emphasis. In this theatre of shadows, nothing is left but a purulent wound of mechanical words, without perspective, without truth, and without foundation. Quite often “truth” is nothing more than the pure and misleading creation of the media, corroborated by fabricated images and testimonies.

When that happens the word of God fades away, inaccessible and inaudible. Postmodernity is an ongoing offence and aggression against the divine silence. From morning to evening, from evening to morning, silence no longer has any place at all; the noise tries to prevent God himself from speaking. In this hell of noise, man disintegrates and is lost; he is broken up into countless worries, fantasies, and fears. In order to get out of these depressing tunnels, he desperately awaits noise so that it will bring him a few consolations. Noise is a deceptive, addictive, and false tranquilizer. P. 56

Those are powerful, perceptive words! Much of the chaos that we report every day in LifeSite stories is reflected in those two preceding paragraphs. Cardinal Sarah does not “beat around the bush.” He gives it to us straight so that we might be able to fully understand and respond to our illness. That is what a genuine doctor of the soul must do. This is not facile “accompaniment,” but rather true shepherding and acceptance of the call to be a prophet for our time.

The silence of the eyes

Sarah carefully explains that the silence he is talking about involves much more that what enters the ears. Everything that enters the mind and heart through the senses, emotions and memories can create howling internal “noise” and greatly disturb our internal equilibrium, sense of being and relationship to our Creator.

I have never heard the term, “silence of the eyes,” but Cardinal Sarah explains it well, especially as it applies to our modern culture:

46. The silence of the eyes consists of being able to close one’s eyes in order to contemplate God who is in us, in the interior depths of our personal abyss. Images are drugs that we can no longer do without, because they are present everywhere and at every moment. Our eyes are sick, intoxicated, they can no longer close. It is necessary to stop one’s ears too, because there are sonic images that assault and violate our sense of hearing, our intellect, and our imagination. P.44

43. For some years now there has been a constant onslaught of images, lights, and colours that blind man. His interior dwelling is violated by the unhealthy, provocative images of pornography, bestial violence, and all sorts of worldly obscenities that assault purity of heart and infiltrate through the door of sight. P.42

44. The faculty of sight, which ought to see and contemplate the essential things, is turned aside to what is artificial. Our eyes confuse day and night because our whole lives are so immersed in a permanent light. In the cities that shine with a thousand lights, our eyes no longer find restful areas of darkness, and consciences no longer recognize sin.

Negative impact on the conscience

All this external and subsequent internal “noise” has had a profoundly negative impact on the consciences of modern men and women. Our otherwise natural perceptions of right and wrong are suppressed or confused. Modern man can’t comprehend the reality of moral absolutes and instead wallows in ever-changing, emotionally self-serving and personally destructive moral relativism.

To a large extent, humanity has lost an awareness of the seriousness of sin and of the disorder that its presence has introduced into personal, ecclesial, and social life. More than 50 years ago, in his homily on September 20, 1964, Blessed Paul VI stated this tragedy in these terms:

In the language of respectable people today, in their books, in the things that they say about man, you will not find that dreadful word which, however, is very frequent in the religious world – our world – especially in close relation to God: the word is “sin”. In today's way of thinking, people are no longer regarded as sinners. They're categorized as being healthy, sick, good, strong, weak, rich, poor, wise, ignorant; but one never encounters the word sin. The human intellect having thus been detached from divine wisdom, this word “sin” does not recur because we have lost the concept of sin. One of the most penetrating and grave words of Pope Pius XII, of venerable memory, was, “the modern world has lost the sense of sin.” What is this if not the rupture of our relationship with, God, caused precisely by “sin”.

Those words were written by Paul VI in 1964, but so much has happened since then that we can confidently say that the word “sin” is no longer even “very frequent in the religious world.” Pastors, bishops and even the current Pope don’t like to inflict guilt on the flock, and especially on those engaged in immoral behaviours, by using the word “sin”. If any sin is mentioned at all it is often in relation to supposed “sins” against the environment or economic or other worldly issue “sins” or the sin of being too “rigid” and faithful.

45. Far from God and from the lights that spring from the true Light, man can no longer see the stars, cities have become such flashlights the dazzle our eyes. Modern life does not allow us to look calmly at things. Our eyelids remain open incessantly, but our eyes are forced to look at a sort of ongoing spectacle. The dictatorship of the image, which plunges our attention into a perpetual whirlpool, detests silence. Man feels obliged to seek ever new realities that give him an appetite to own things; but his eyes are red, haggard, and sick. The artificial spectacles and the screens glowing uninterruptedly try to bewitch the mind and the soul. In the brightly lit prisons of the modern world, man is separated from himself and from God. He is riveted to ephemeral things, farther and farther away from what is essential. P.43

I have so far only read up to page 56 in the The Power of Silence, but already Sarah has given a few prescriptions here and there on how to overcome this tyranny of noise.

He quotes Mother Teresa who wrote, “silence of speech, gesture, or activity finds its full meaning in the search for God. This search is truly possible only in a silent heart.” Sarah says that “This nun did not like to speak and fled the storms of worldly noise.”

“Silence needs meekness and humility”, writes Sarah, “and it also opens for us the way to these two qualities. The humblest, meekest, and most silent of all beings is God. Silence is the only means by which to enter into this great mystery of God… In silence, man is absorbed by the divine and the world’s  movements no longer have any hold on his soul.” There is the solution.

I am very much looking forward to reading the rest of The Power of Silence. There is no doubt that many LifeSite readers would also benefit from obtaining and reading this timely, exceptionally insightful book.

Cardinal Sarah’s new book: The Church can only combat the worldliness of our age by embracing silence

Church is ‘gravely mistaken’ if refugee crisis is her primary mission: Cardinal Sarah

Cardinal Sarah: Many Church leaders ‘underestimate the serious crisis that the Church is going through’

Cardinal Sarah: Fight against abortion is ‘part of the final battle…between God and Satan’

Cardinal Sarah and our silent apostasy