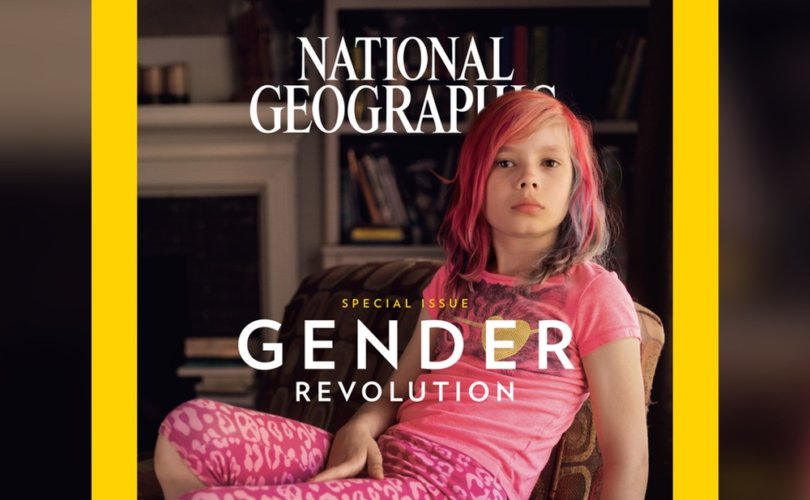 December 13, 2017 (LifeSiteNews) – Virtually unknown less than a decade ago, the North American transgender movement has now infiltrated mainstream institutions with such speed that many people are still unaware of what the movement stands for and what the implications of transgender ideology are.

The Associated Press has ordered its journalists to use the recently-invented “transgender pronouns.” Major media outlets dutifully report on an uptick of “pregnant men.” National Geographic Magazine lent the credibility of its golden frame to so-called “gender fluidity” with a cover story on “The Gender Revolution.”

And of course, LGBT activists are already hard at work rooting out heretics in politics, media, and academia.

In Canada, it began with Dr. Jordan Peterson, who sounded the alarm with several YouTube videos warning that legislation being considered by Canada’s Parliament that was being portrayed as protecting the human rights of trans people would actually grant special rights and coerce speech by forcing people to use the transgender pronouns. Peterson was viciously attacked on all sides but not only survived the public pillorying, but ended up becoming a significant public intellectual with an enormous audience. Peterson’s opponents have now switched tactics, and are instead attempting to smear Peterson with the “alt-right” label and falsely associate him with white supremacists.

The same thing is currently happening to Lindsay Shephard, the grad student at Laurier University who was hauled before a grotesque troika of academic social justice warriors and reduced to tears after she showed a clip of a TVO debate with Dr. Jordan Peterson and a trans advocate in class. Shepherd says that she leans left on the political spectrum, but apparently how she self-identifies is irrelevant to those who wish to destroy her for the heresy of open-mindedness. She is now being described by some media figures, LGBT activists, and progressives across the Twittersphere as “alt-right.”

And then there was Linda Macdonald, who describes herself as a “left-leaning Canadian mom,” who was kicked out of a support group sponsored by Family Services Ottawa for the parents of trans children for expressing her hope that her daughter’s Rapid Onset Gender Dysphoria might yet be dealt with in a way that did not include physical surgery and transition. For hoping that her teen daughter would not opt for a double mastectomy and radically transform her body, she was labeled “unsafe” and ejected by the group leader.

And now, CBC Documentaries—an arm of Canada’s state broadcaster—has decided to pull a documentary called “Transgender Kids.” Initially, they announced the release on Twitter with this description: “Who Knows Best? Parents are encouraged to adopt a ‘gender affirmative’ approach—fully supporting their children’s change of identity. But is this approach right?” The documentary examined some facts that trans activists badly want to suppress, including the fact that most children naturally outgrow gender dysphoria. The implication of this, of course, is that physical transition in the pre-adolescent and teen years can have horrifying results.

The trans heresy hunters saddled up immediately, and CBC Documentaries faced an online campaign fueled by activists accusing them of “transphobia” for daring to present science, facts, and perspectives that do not precisely line up with their own.

The CBC, predictably, caved, and announced that they would be pulling the documentary: “In light of our own further review of the doc, coupled with audience reaction, we have decided not to air Transgender Kids. We think there are other docs that better offer insight into the realities of the transgender community and we look forward to airing those in the future.”

Interestingly, the zealousness of trans activists in stomping out all dissent and persecuting anyone who dares to disagree with them is beginning to backfire. Many ordinary liberals were on board with gay marriage, but find the idea of men getting pregnant a bridge too far—and the reaction to both Peterson and the interrogation of Lindsay Shephard prove that many, if not most, people find the trans activist witch hunt repulsive and dangerous.

On Twitter, exasperated journalists responded to the CBC cancellation with disgust, with even many left-leaning writers complaining that it was rapidly becoming impossible to have reasonable discussions about certain issues.

The last several months have proven two things: Trans activists have an enormous amount of power and sway in the institutions of politics, academia, and media. But it is also true that people are becoming fed up with their bullying, censorship, and attacks on any expert, columnist, or scientist—and there are huge numbers of them—who disagree with trans ideology.

Even journalists sympathetic to trans causes are beginning to push back, and most people recognize the libelous ridiculousness of calling left-leaning people “alt-right” simply for daring to disagree or ask questions. The trans movement has pushed far and lightning fast, but maybe, just maybe, we are seeing the beginning of a pushback.