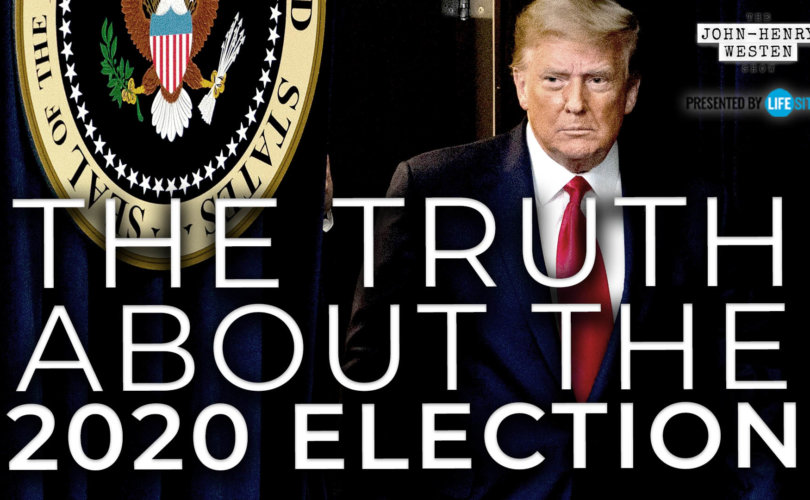 January 8, 2020 (LifeSiteNews) – The election in the United States was manipulated massively in order to favor Joe Biden. And not only that, the mainstream media’s narrative about the election is false but its power of influence is so immense, it’s creating dvision among the best defenders of the truth.

This past week has been unbelievable! We need to pray like never before. The truth has become obvious in some ways, yet the falsehoods are so effective that the vast majority of good people are being deceived.

What is currently happening in the U.S. seems capable enough of destroying the conservative movement. It also has the potential to be used by the Left all over the world as a cudgel to make defenders of faith, life, and family out to be crazed violent enemies of the people.

But anyone should be able to see, at the same time, the very tools used to steal the election of 2020, since they are now at play like never before. The mainstream media, and even more than that, the social media monopolies, have been the biggest manipulators of a fair election. They have lied outright and concealed the truth. They have censored even the President of the United States with impunity – and no one on either side even disputes this.

Moreover, earlier this year I interviewed on this show Robert Epstein, an atheist Jewish Democrat who, despite his political leanings, was appalled at the election manipulation being undertaken by Google and the other Big Tech social media giants such as Twitter and FaceBook. He scientifically demonstrated the massive vote manipulation that was possible and showed that it was in effect.

Beyond even this, we had the hearings into voter fraud which showed testimony of hundreds of sworn affidavits and the manipulations in courts which forbade the evidence from ever being presented. Furthermore, we had video of the fraud being carried out and a heroic sting operation which demonstrated the voter fraud live for all to see. Except hardly any did see it. Why? Because the mainstream media is under almost total control by the left.

At LifeSite we’ve known this for 25 years. It was the reason why we began this media mission. Yet, despite our best efforts most of the good, God-fearing people cannot see what is happening.

So, let me try to show you some of that – just enough so you can at least know that you’ve missed something, something big you need to look into, something that may help you understand why Americans are concerned enough to finally raise their voices to protest the stealing of their democracy.

People suggest constantly that there is no evidence of voter fraud. That argument hinges on the lower courts having rejected the attempts to demonstrate that. Well, there is testimony from a lawyer for the Trump team working in Nevada. He details all the ways his team verified the fraud, and then tells of how they were unable to use the evidence in court because their access to the information was delayed so long that the date set by the court to submit the evidence had passed.

And even beyond that, there is much evidence of the voter fraud and manipulation on video. We saw Republican poll watchers being denied access over and over again. And let me give a hat tip here to Project Veritas which conducted many sting operations demonstrating massive voter fraud in the act.

So, yes, America is being fraudulently handed over to the Global Reset crowd with Joe Biden being the lead puppet for the moment. And the biggest culprit is the mainstream media and the tech giants that have manipulated the election, controlled the flow of information, and used their near-total monopoly to bamboozle the public worldwide. They are pulling accounts on the political right and center.

This is a battle for truth. Not for Donald Trump. At LifeSite, we have openly criticized Trump for pushing the LGBT agenda and will always do that without apology. But blaming Trump for the current situation is ludicrous. The manipulation here is more plain and obvious than it has ever been before.

And in all this I must say we feel totally helpless, like little mice before a goliath. But that is exactly where I’m happy to be. Small and outnumbered is the perfect time for Our Lord to act. In the end, He is victorious. In the end Christ wins.

Where do we go from here?  The best course of action for freedom-loving pro-lifers, I believe, is simply this:

LifeSite  will continue to bring our readers fearless reporting on issues of life, faith, family, and freedom. Please pray for all of our journalists and staff, that we may prudently and accurately report what is happening in America and around the world.

You can send me feedback, or ideas for show topics by emailing jhwes[email protected].