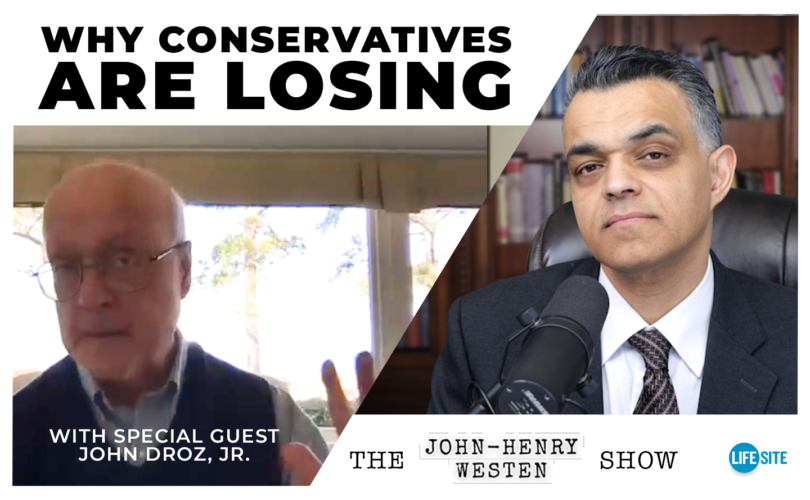 March 6, 2021 (LifeSiteNews) – In this week’s episode of The John-Henry Westen Show, John Droz joins me to discuss the two main reasons conservatives are losing.

John Droz, Jr. is an independent physicist and has been an environmental activist for over 30 years. He has been an outspoken critic of wind energy, climate “science,” and is the founder of the Alliance for Wise Energy Decisions. Droz joined me on this special episode of The John-Henry Westen Show to discuss the irregularities he and his team found in election results, as well as the two big things that are holding back conservatives.

Droz and his team of experts conducted a complete analysis of election results looking for irregularities. Some of Droz’s reports were used by Sydney Powell and Rudy Giuliani in their cases. When asked if there were statistical irregularities in the 2020 election, Droz said, “unequivocally, yes.”

Despite the clear mathematical evidence indicating election irregularities, the 83 cases brought before the various courts have largely been dismissed due to “legal technicalities”; they were not dismissed based on evidence. Droz states that this was a mistake as this does not allow for proper election reform. By dismissing the cases, the courts are putting the U.S. in a position where election irregularities are going to happen again.

There are over 130 conservative-leaning national groups. “Think of what we could do if these 130 groups were working together.”

“They [the left] work together significantly more than groups do on the right,” Droz says.

Droz also points to conservatives’ poor messaging and public relations as the second main reason conservatives are losing. The left understands how to message and market to people. Droz points to the use of the term “wind farm.” A facility with windmills that produce power is not a farm.

“The only thing that is farmed at a wind facility is subsidies.”

But the left realizes these wind facilities will be in rural communities. So instead of properly calling them a wind facility or large industrial complex, the left calls them “wind farms.”

“They wanted to send a message that this was bucolic, pastoral, stuff like that,” Droz says.

Droz encourages conservative groups and leaders to work together.