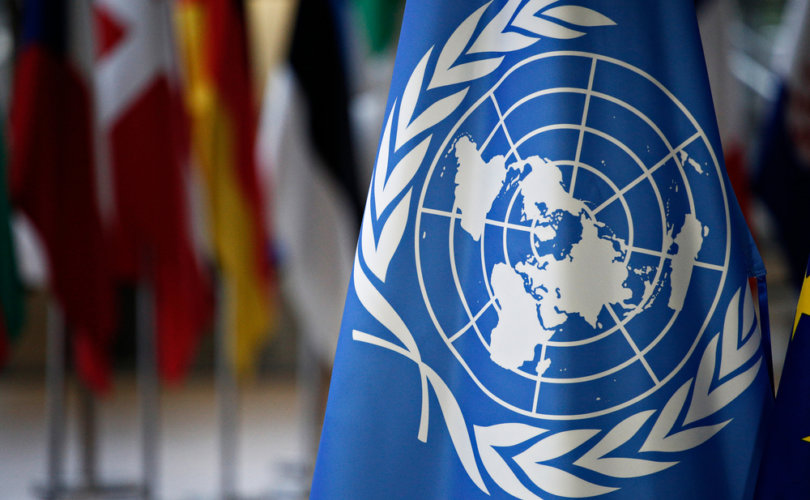 (LifeSiteNews) — A key aspect of totalitarianism is that dissenters from the state orthodoxy are punished. As one summation puts it: “Everything not forbidden is compulsory.” We are seeing that with the LGBT movement. Same-sex weddings aren’t just for same-sex couples — they want to force Christian florists and bakers to help them celebrate. It isn’t enough for them to change their pronouns, or even to have the government play along and recognize them either — they want you, and everybody else, to affirm them, as well.

We’re seeing how this has played out in the U.K., where young moms have gotten visits from the police for disagreeing with trans ideology on social media, dads have gotten investigated for tweeting jokes about transgenderism, and a construction worker got fined simply for laughing at a biological male trying to pass himself off as a woman. No matter how ludicrous our new overlords in drag are, we must never, ever laugh.

C-Fam recently reported on another ominous development. The UN Secretary General put forward a new report to the General Assembly calling for “criminal penalties against anyone who criticizes gender theory, sexual orientation, gender identity, and even sex-ed.” As C-Fam’s report observes:

The September report, produced by Independent Expert Victor Madrigal-Borloz working under the aegis of the Human Rights Council, argues there is a substantial “backlash” against the human rights advances achieved by homosexuals, transgenders, and that this backlash threatens and perpetrates violence against these persons.

Madrigal-Borloz notes that this backlash comes from a “steep rise in ultraconservative political leaders and religious groups using their platforms to promote bigotry, dehumanize persons…and foster stigma and intolerance among their constituencies.”

Madrigal-Borloz cites a report that claims “anti-gender” groups from the United States raised $6.2 billion between 2008 and 2013 and that these groups funneled $1 billion around the world to fight the rise of LGBT rights. The report is from the Philanthropy Project, a coalition of leftwing foundations two of which – Ford Foundation and Arcus Foundation – have a combined $14.7 billion under financial management. The lead “anti-gender” group cited in their report is the International Organization for Marriage which raised only $247,000 in 2019.

Unsurprisingly, Madrigal-Borloz cites the Catholic Church as a particularly egregious threat, stating that the Church’s doctrines on life and family — which would be agreed upon by orthodox Christians the world over — constitute a violation of human rights law. An example of how these views end up in law, he writes, is American legislation protecting female sports. In response, Madrigal-Borlox called on UN member states to “take decisive and concerted actions to counter exclusionary practices that threaten to undermine the international, regional, and national human rights and gender frameworks.”

In short, Madrigal-Borloz writes: “[P]ractices of exclusion not in conformity with international human rights law must be treated accordingly including … by placing them under the legal framework for hate speech and hate crimes.”

The UN General Assembly does not, at this time, accept transgender ideology — a majority of nations around the world reject same-sex “marriage” and there are more countries with conservative views on these issues than vice versa. Madrigal-Borloz’s calls to criminalize the Christian view of sexuality and family will thus not be heeded in the interim, but he is doing what LGBT activists have proven very effective at for decades: Laying down a paper trail to be used by activists in the years ahead.