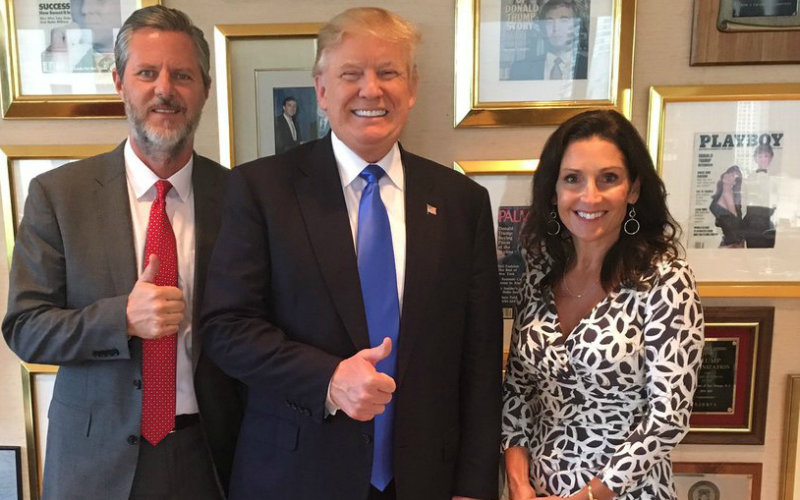 Sept. 28, 2016 (LifeSiteNews) – For eight long years, traditional Christians have fought with the Obama Administration as he tried to force Christian business-owners to pay for birth control and abortifacients, decreed that all schools had to bend to the knee to the brand-new transgender ideology or lose their funding, and began speaking of “freedom of worship” rather than “religious liberty.” For four long years, Christians waited for the opportunity to nominate someone who would defend their interests in Washington, D.C. And then, it all came crashing down with the nomination of the once and future New York liberal Donald J. Trump, one of the Sexual Revolution’s most ardent practitioners.

Some Christians, of course, voted for him, often out of fear and anger. They were angry, and Trump was angry, too. They liked that. Others wanted a strongman in Washington standing up for their interests, and took the slick real estate magnate seriously when he promised that he’d fight for them. Some Republican candidates talked like pastors, but Trump talked like a gladiator just as many voters were sick and tired of being pushed around. When he called the media “vultures” and “scavengers” and “really dishonest people,” those who had been called “homophobic” and “bigoted” and “stupid” and “hateful” for years by the media rejoiced in the catharsis. Donald Trump was finally a candidate who would smash political correctness right in the face.

There are just a few problems. Donald J. Trump was pro-abortion up until birth until a very short time ago, and was so unfamiliar with the basic positions held by the pro-life movement that he suggested women be punished for having abortions. He’s on his third marriage, having cheated on his previous two wives and acting with extraordinary cruelty during the divorce proceedings. He talks about women in ways that no Christian can accept. He’s the first major presidential candidate to own strip clubs. He has a framed copy of Playboy on his office wall. Based on his refusal to answer the question—and it’s a pretty simple one, after all—it seems likely that he’s paid for abortions in the past. He doesn’t really care about the transgender bathroom debate or its implications. Aside from that, he is shockingly uninformed on many of the issues, as this week’s presidential debate highlighted. He’s also explosive, thin-skinned, and unable to ignore baiting by opponents.

That is why the Left is absolutely apoplectic when they look at the polls and see that Donald Trump is running neck-in-neck with Hillary Clinton. They cannot understand why. She knows more about policy! She’s way calmer than he is! She’s got way more experience than he does! She says all the right things! Why? Why, as Clinton herself put it, is she not fifty points ahead right now? And why—why—are many people who genuinely find Trump to be a distasteful, out-and-out huckster still going to vote for him in November?

What the progressive and left-leaning columnists and punditry cannot understand is that for many Christians, deciding to vote for (not support) Donald Trump over Hillary Clinton isn’t a reflection on Trump’s suitability for the presidency nor his trustworthiness nor his social conservative credentials. Neither candidate is suitable for the presidency, neither is trustworthy, and Trump doesn’t have any social conservative credentials. Voting for Trump is not a reflection on Trump, it is a reflection on just how bad Hillary Clinton is, and just how scared many, many Christians are of another near-decade of secular progressive rule.

Trump has, of course, allowed the punditry to ignore Hillary Clinton’s career conveyer belt of corruption because they find him so repulsive that objectivity can be ignored. But in dishonesty, Hillary easily matches him—and when she does lie, her lies are of far more consequence. She, after all, lied to crush those “bimbos” her husband used in order to ensure the discarded women couldn’t threaten their careers. She lied about the terrorist attack in Benghazi, where an American ambassador and American citizens were murdered. She lied about her email servers (one of which she kept in her bathroom) and lied about how many devices she used to send and receive emails, compromising national security and in all probability (according to the FBI) exposing state secrets to the Russians and the Chinese. She was so habitually deceitful, as Christopher Hitchens once put it, that she had “no one left to lie to.” She’s also as personally repugnant as Trump is—read any behind-the-scenes account, from Bob Woodward’s books on the Clinton years to interviews with Secret Service agents, who universally despise her. Her temperament, which is even-keeled in public from years of practice, is explosive and profane behind closed doors.

The punditry is presenting this race as an unhinged, crazy racist a few sniffs shy of a straight-jacket and Hillary Clinton as a brilliant and upright stateswoman, when the fact is that it’s really hard to figure out who beats who for pathological lying, unpleasantness, and lack of moral character. The media doesn’t seem to realize just how loathed Hillary is, and don’t seem to recognize why. A lot of voters look at Donald Trump’s string of marriages and his boasting about his sexual exploits and just see white trash with money. They understand him, even if they don’t agree with his lifestyle. Hillary, on the other hand, scares them—cold, calculating, moving chess pieces about inch by inch for decades as she oozed towards her ultimate goal of being leader of the free world.

And the fact is, the left-of-centre—and even the few centrist—pundits simply do not understand what Christians are afraid of in Hillary Rodham Clinton. Hillary Clinton isn’t a lazy liberal, she’s a committed and passionate one. Planned Parenthood is possibly the only thing the Clintons have ever been faithful to. She wants to repeal the Hyde Amendment and thus force the taxpayers to fund each and every one of the more than one million abortions that happen each year. She says that those who oppose abortion and gay marriage must “change” their religious beliefs to get with the times. She is fully, 100% on board with the gay and transgender agenda. She poses a real and imminent threat to Christians who want to live their lives, run their own businesses, go to their own churches, and pass their values on to their children. But the punditry, who generally treat religious liberty as a non-issue or even, increasingly, a fictitious concept, do not realize that Hillary, to many Americans, is quite literally a destroyer of worlds.

That’s why many Christians are voting for Donald Trump. Not because of what he will do, but because of what he won’t do. Trump probably adopted the pro-life position out of sheer political convenience, and in all probability he doesn’t care about the issue in the slightest. But Hillary does care about the issue—she passionately wants to attack pro-life laws with all the power the presidency would afford her, and enshrine the right of Planned Parenthood’s butchers to receive funding directly from the wallets of the taxpayers. Trump may not do anything for the pro-life movement. But he certainly won’t make things worse, as Hillary promises to do nearly daily. And who knows? Trump adopted his pro-life position out of political expediency. Perhaps it will continue to be politically expedient for him to hang onto it. Pro-life leader Scott Klusendorf often noted that in regards to imperfect political candidates, you “vote for a second-class firefighter over a first-class arsonist.” For Trump, we’ll have to amend that a bit: Many would rather vote for a drunk, derelict, and negligent firefighter than a first-class arsonist, because sometimes someone not showing up at all is the best option on the table.

The same applies to religious liberty. In all likelihood, Trump doesn’t care about the issue—if he’s even aware of its existence. But Hillary would explicitly attack it. She supports Barack Obama’s executive orders demanding that all schools bow to the LGBTQ agenda. She does not support those who state that it is against their conscience to pay for birth control or abortion. She will very explicitly choose Supreme Court judges who genuflect to a gold-framed copy of Roe v. Wade each morning and see Obergefell as a triumph of the human spirit. When Christians are forced to choose between a candidate who doesn’t care about religious liberty at all and will maybe, perhaps pick decent Supreme Court justices, and a candidate who is dedicated to the destruction of religious liberty, pro-abortion justices, and thinks Christians just need to “change” their religious beliefs on some issues, they’re most likely going to pick the candidate who is most likely to leave them alone.

At the end of the day, virtually every criticism of Trump is true. He’s a huckster. He doesn’t care about most, if any, of the issues that are important to Christians. He’s probably just making promises to ensure that Christians show up and vote for him in November. But on the other hand, Hillary Clinton is passionate about these issues. She’s passionate about the ongoing destruction of human life by abortion, and she’s passionate about furthering the secular progressive agenda that has been backing Christians up against a wall for eight years. So when people point out that Donald Trump will probably do nothing, many Christians respond that yes, that’s the point. He probably won’t. She definitely will.

That’s why the left-wing pundits don’t understand why Christians could countenance voting for Trump, and why no one is listening to them.  Because they think that Donald Trump is crazy, but they also think that dismembering and beheading a child in the womb is a wonderful right. They think that chemically castrating a gender-confused child is a sane thing to do. They think that people should have the right to kill themselves. They think that Christians are backwards, stupid, and outdated. And thus they don’t understand that when Christians read their columns pointing out how obvious it is that Hillary Clinton is the only reasonable candidate to vote for, they read that in context of everything else they believe—and they don’t take it particularly seriously.

The Left is sure that Trump would end the world as they know it. Christians fear that Clinton would turn the United States of America into a hostile nation for them to live in. And thus, the two sides will never see eye-to-eye.