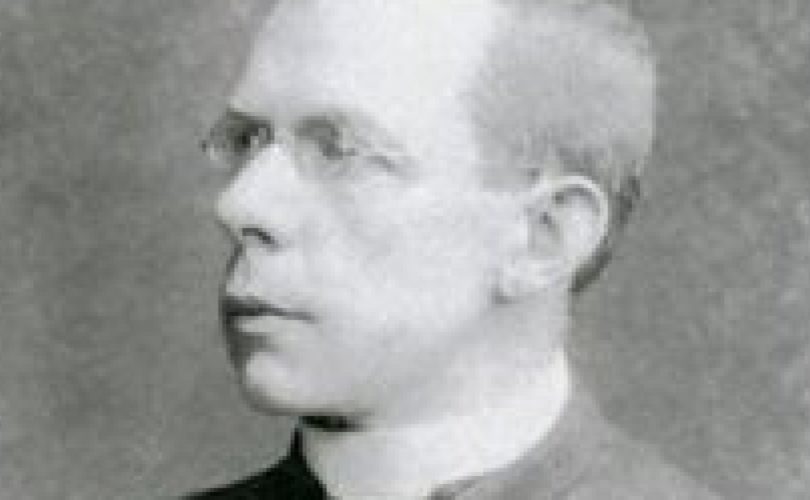 Amidst all the tales of chivalry from the Titanic disaster there is one that’s not often told.

It is that of Fr. Thomas Byles, the Catholic priest who gave up two spots on a lifeboat in favour of offering spiritual aid to the other victims as they all went down with the “unsinkable” vessel.

A 42-year-old English convert, Fr. Byles was on his way to New York to offer the wedding Mass for his brother William. Reports suggest that he was reciting his breviary on the upper deck when the Titanic struck the iceberg in the twilight hours of Sunday, April 14th, 1912.

According to witnesses, as the ship went down the priest helped women and children get into the lifeboats, then heard confessions, gave absolution, and led passengers in reciting the Rosary.

Agnes McCoy, one of the survivors, says that as the great ship sank, Fr. Byles “stood on the deck with Catholics, Protestants and Jews kneeling around him.”

“Father Byles was saying the rosary and praying for the repose of the souls of those about to perish,” she told the New York Telegram on April 22, 1912, according to the website devoted to his memory, FatherByles.com.

In the words of the priest’s friend Fr. Patrick McKenna, “He twice refused the offer of a place in a boat, saying his duty was to stay on the ship while one soul wanted his ministrations.”

Nearly two weeks after the disaster, The Church Progress in St. Louis, Missouri wrote this moving tribute to the heroic priest:

In almost every line that has been written, and in every sentence that has been spoken, there stands boldly out above every other expression a picture of sublime heroism that will be copied into the pages of history. And well it may, for it is deserving of that honor.

But when it is, mention should be made of one whom pens and tongues have almost forgotten in their accounts of this awful sea tragedy. Among those who safely reached the land again no one seems to have been aware of his presence on the ship, but we may hope that many who meet him in a blissful eternity will praise God that Father Thomas Byles was there to administer absolution unto them.