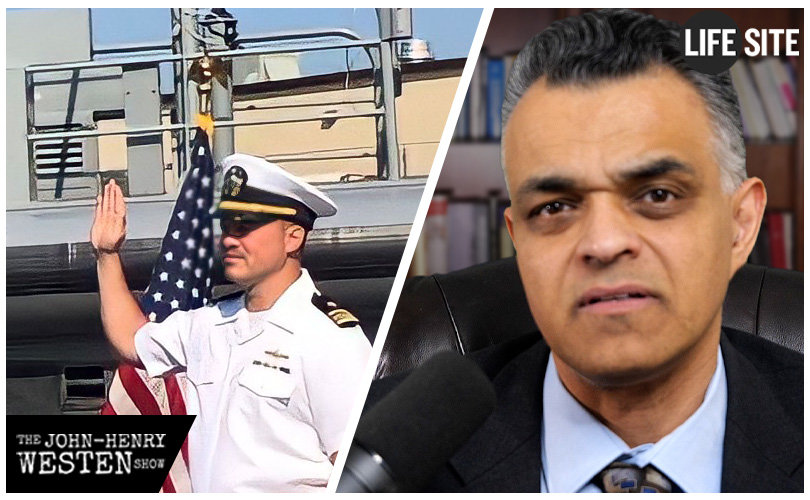 (LifeSiteNews) — Today’s episode of The John-Henry Westen Show is one you really don’t want to miss.

I was joined by Rob Green, a Navy commander demoted for refusing to take the experimental COVID vaccine, and his lawyer, Davis Younts. The two have compiled a trove of accounts and documents exposing the U.S. military’s highly coercive and discriminatory treatment of unvaccinated servicemembers.

Commander Green, whom we have previously reported on here at LifeSite, is a married father of six (soon to be seven!) and a traditional pro-life Catholic. He confirmed that the U.S. military’s harassment of the unvaccinated — many of whom are conservative Christians who object to the COVID vaccine on constitutional and religious grounds — is unprecedented in its severity and scope.

“I’ve never had an issue where my conscience has been violated by what I’ve been asked to do by the service,” he said, “but with the rollout of the vaccine mandates for the military, that is where things started to get questionable for me, and I had to do more research.”

Green soon became the “point man” in whom other unvaccinated Navy members confided about their own predatory and coercive experiences. Some have had their travel restricted or have been berated daily by their superiors. Others have been denied medical treatment or barred from attending religious services.

Now, alongside his attorney, Green is going public with all the proof needed to convince us that the U.S. military has it out for servicemembers who sincerely object to the abortion-tainted COVID jabs. The extreme lengths to which the military will go with its coercive tactics are truly astonishing.

Listen to today’s episode below: